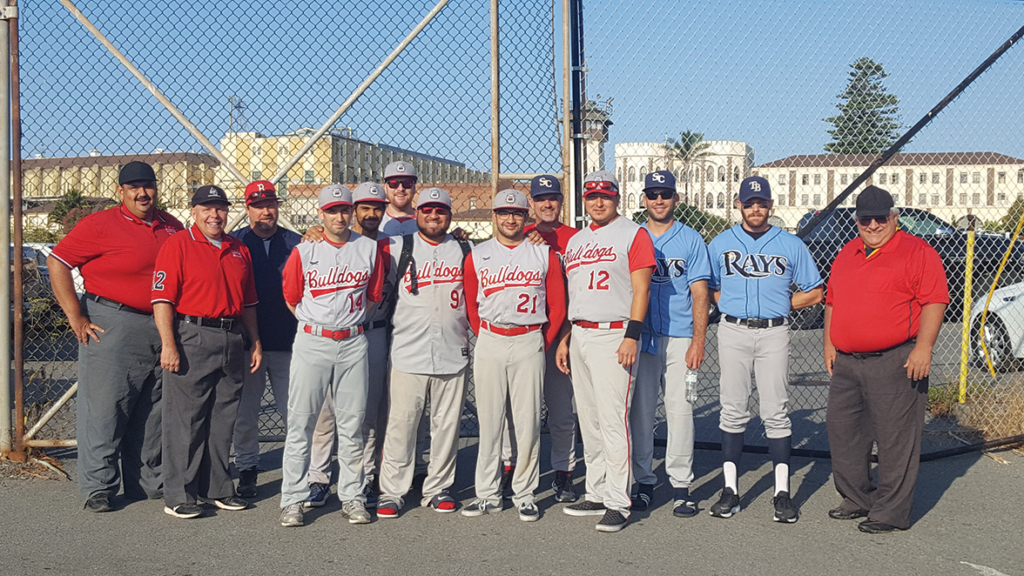 The visiting Southern California Bulldogs ran into a red hot San Quentin A’s baseball team in an Aug. 25 double- header that was described as “magical,” even though the hitters dominated the pitchers.
In game one, Bulldog Jake Garvey smacked a booming home run over the left field fence to the cheers of his family. The Bulldogs brought their own fan club, mostly Garvey’s family and a group of umpires from their Southern California Adult Baseball League (SCABL) games.
“I go everywhere my son goes to play ball,” said Penny Garvey. “As a mom you are al- ways worried about your kids. So hearing about him coming to play here was no different. He was excited to come and that rubbed off on us.”
“It felt so familiar talking with so many people from home,” added Garvey’s mom, who was here from Southern California.
Jake Garvey added, “This was a special opportunity to bring baseball to people I wouldn’t normally play against. I also got educated on prison life. More people need to see this.”
After multiple lead changes, the A’s squeezed passed the Bulldogs 15-13 to take game one. In game two, both teams came out swinging, picking up where game one left off. The teams battled, and the A’s had a 9-7 lead in the sixth inning. But a 30-minute emergency alarm forced the game to be called.
“The day was therapeutic, inspirational and spiritual,” said Patrick Blake, SCABL president. “At the midway point of the day you could feel the love [among everyone] on the field.
“Then, at the end of the night, the way the game end- ed was just really magical. The whole day was magical,” added Blake.
The Bulldogs are the 2018 champions of their league and wanted to celebrate by playing at San Quentin. Blake brought the professional um- pires in to give pointers to the inmate umpire staff to help enhance the prison program. Both officiating crews mixed to call the game.
“They brought a piece of home here,” said Juan Navarro of the A’s, a first-year player who is from Southern California. “It’s a chance to show people who we are now and not just what we [have] done.
“This program helps change your mentality because once we put on that jersey, all the race stuff goes away and we are all A’s,” added Navarro.
In game one, the Bulldogs took a commanding 7-3 lead by the start of the fifth inning. They were coasting around the bases with the swagger of a champion when they scored. But the scrappy A’s never give up. The A’s put on a batting clinic in the bottom of the fifth to take a 9-7 lead.
Feeling the pressure on seeing their lead evaporate, the Bulldogs fired back with a rally of their own. They regained the lead 12-9 in the seventh.
The A’s answered back with two runs to close the gap to 12-11. In the eighth, the Bull- dogs threatened to blow the game wide open with the bas- es loaded and two outs. The A’s put in relief pitcher Robert Polzin. He walked in a run but fanned the next batter to save the inning. The A’s re-claimed the lead with four runs in the bottom of the eighth.
The Bulldogs’ final at bat could not solve the Polzin fastball and fell one, two, three to end the game.
“We all were brought together by baseball,” said Blake. “Baseball, as life [has], singles, doubles, triples and home-runs.
“The game also comes with errors and other mistakes. We all make them. But for this day we were brothers. I, as well as the rest of the guys, can’t wait to come back,” added Blake.