A tech-tidal wave is hitting the criminal justice system, transforming faces into license plates and your smart phone into a snitch.

These new technologies allow criminal-justice systems unparalleled surveillance capacity of vast amounts of data. The Economist magazine anticipates the future in the technology report “Justice Data Detectives.”
DATA FOR DETECTIVES
Technology has changed the relationship between information and crime in two ways: people create massive amounts of data and current laws have not kept pace with this change, reports The Economist.
Smartphones track and record where people go or whom they talk to and their apps reveal personal information on what they search, buy, read and watch.
To capture this data, police no longer need to follow or stake out a suspect nor get a warrant. They can seize the suspect’s phone and bypass its encryption. If he drives, police cars, streetlights and car parks equipped with automatic number-plate readers (ANPRS) that can track all movements and facial recognition software will confirm his identity.
Even your smartphone will snitch on you. “Uber filed for a patent on AI technology that can determine a potential passenger’s level of inebriation based on movements of his or her smartphone, as well as location near bars,” reports The Guardian.

Privacy laws have not kept pace with technology. The laws were written in the time of post offices and landlines. The courts generally give citizens protection from police entering a home, however, “the law on people’s digital presence is less clear.”
Law enforcement actions have become less visible to the public, but new technology is being widely used across the world.
“If you drive in a city anywhere in the developed world, ANPRS are almost certainly tracking you. This is not illegal,” reports The Economist.
Policy, due process and public opinion are lagging behind the uses of these new technologies.
“Police need oversight, not because they are bad people, but because maintaining the appropriate balance between liberty and security requires constant vigilance by engaged citizens,” concludes The Economist.
STREET-LEVEL SURVEILLANCE
The ANPRS commonly monitor via street signals, police cars, parking garages and bridge tolls. Facial recognition software is coming.
Your face is now a license plate and watching cameras are police body-cams, store security cameras and every smartphone.
In China, facial recognition is “widely deployed” and used for everything from ticketing jaywalkers to finding thieves in a huge crowd, according to Maya Kosoff in The Week.
Amazon, America’s biggest e-commerce company, launched Rekognition recently – an online service to help identify faces in real time.
While amusement parks have used Rekognition to locate lost children, Amazon has also been pitching the technology to police departments, reports Nick Wingfield in The New York Times. The Orlando Police Department in Florida and the Washington County Sheriff’s Office in Oregon are paying customers.
Last June, “more than two dozen civil rights organizations demanded that Amazon stop selling Rekognition to law enforcement, saying it could become an instrument of mass surveillance,” reports The Week magazine.
Police in Hagerstown, Md., have been among the first to admit using facial recognition software to identify a robbery suspect from an Instagram photo, according to The Herald Mail Media.
“Thirty-one states now allow police to access driver’s license photos in facial-recognition searches,” according to the Center on Privacy and Technology at the Georgetown University Law Center.
While Texas, Illinois and California have laws to regulate facial recognition technology, there are no federal laws.
Other countries, however, regulate the use of a citizens’ unique face information and other biometric data. The European Union has a General Data Protection regulation that requires private companies to have consent for its use of collection biometrics from citizens.
Privacy advocates have opposed such use in New York City. Police may only search mug shots, not driver’s license photos in their facial recognition searches.
“People provide their photo for a driver’s license database so they can drive…not become suspects in a criminal investigation,” said Jennifer Lynch of the Electronic Frontier Foundation.
A.I.-powered facial detection software has glitches.
It “can actually reinforce bias and exclusion, even when it’s used in the most well-intended ways,” accord to a New York Times opinion by Joy Buolamwini, founder of the Algorithmic Justice League and a graduate researcher at the Massachusetts Institute of Technology Media Lab. Buolamwini found that facial detection software was inaccurate when attempting to identify people of color.

By the time John Wallace was released from San Quentin, he had written 75 songs.

John Wallace, 39, who discharged in 2003, founded a project called STOP (Surviving the Odds Project) to help deter at-risk youth from falling into the school-to-prison-pipeline. Fifteen years after his release, he’s showing kids the creative outlet he wished he had at their age.

The former gang member now empowers at-risk youth through musical self-expression at Legion Beats in San Rafael, reported the Marin Independent Journal. His first class of 13 students will write, record and create a music video over the course of a few weeks. In May, they’ll have their first live performance.

“I wanted to give back to where a kid wouldn’t have to suffer any longer or blame others for what they’re going through and learn how to express themselves,” said Wallace, who grew up in Marin City.

Wallace started by focusing on kids in Marin County schools, not far from where he was incarcerated; he focused particularly on those at the greatest risk of being expelled, bullied or behaving in a manner that cries out for support.

“We did an ice-breaker where I told the kids, ‘Tell me something that you wouldn’t want anybody to know about yourself,’” Wallace said.

Surprisingly, the kids revealed secrets and stories that had a profound effect on them, like the murder of a sibling. Wallace himself had experienced bullying and trauma, too.

“We want to get them to express this type of stuff through music or express how it’s making them feel, without using profanity and without using glorification of drugs and street life,” Wallace said.

“We’re just scratching the surface right now. I know what it’s like being an at-risk youth and dealing with my skin color, for one, growing up in Marin City, and the criminal justice system,” Wallace said.

After years of expressing himself on paper, Wallace released his first album, “All of My Life,” last December under the stage name Freedom because of what music has done for his life. His biggest supporters throughout his journey are his future mother-in-law and his fiancée.

“Her mom has always said, ‘I wish other people could see your light shine bright, because it’s shining really bright right now. You have something to offer,’” Wallace said. “I just have to keep believing that.”

The impact on children of incarcerated parents 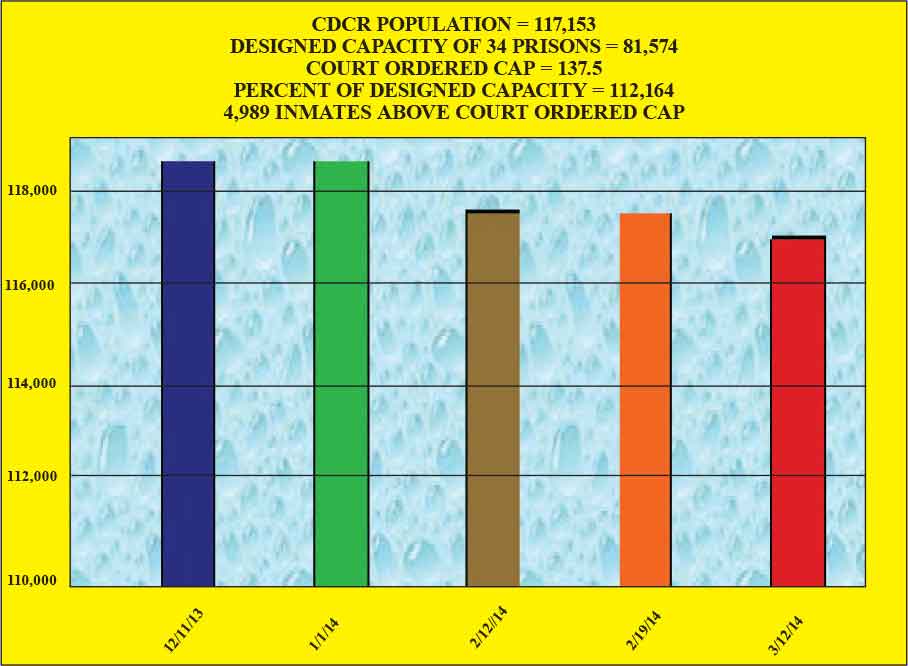 The new FOX series “Lucifer” depicts a lopsided view of America’s criminal justice system, but that may be the least of its sins.
In “Lucifer,” Laura German plays Chloe Decker, a homicide detective who struggles to be taken seriously by her male co-workers. Tom Ellis plays Lucifer Morningstar, the fallen angel and beguiler extraordinary. Morningstar is the dark half of his and Decker’s buddy cop-consultant team — think ABC’s hit show “Castle,” but replace author Richard Castle with the Devil.
Lucifer loves quips and sex (in that order). What distinguishes him from Richard Castle is his obsessive compulsion to punish criminals and bad people who always turn out to be one and the same.
The SQ Reviews team meets in a lot between the Education Department and San Quentin News. The team discusses how the mainstream media romanticizes corruption in law enforcement. Members of SQ Reviews have also been watching FOX’s “Second Chance” and NBC’s “Shades of Blue,” two shows featuring corrupt police officers as protagonists whom the viewer should support.
“Lucifer falls into the same category as these other corrupt cop shows,” I said. “How is it in the age of Black Lives Matters that media still cast corrupt authority figures as heroes?”
“They’re playing to the confusion in society,” replied Juan Meza. “Everybody knows that there’s something wrong with our justice system. They think it’s the criminal, and so they cheer for the dirty cop – been that way since Dirty Harry,” said Meza. He added that audiences don’t want to see that some cops represent the problems with the justice system.
“Yeah, it’s hard for people to see problems with law enforcement,” said Jonathan Chiu. “They’re blinded by the Bernie Madoffs of the world. I mean, look at O.J. Simpson. The majority of America thought he was guilty and his acquittal gives the average person the impression that this kind of thing happens all the time. They think guilty people in court aren’t punished, so the public gets outraged and says, ‘Lock everybody up. We don’t care how you do it. We just want criminals in jail.’”
“Your O.J. example does happen all the time,” DeWeaver said. “Millionaires get away with crimes, but the thing is the 2.3 million people in prison today aren’t millionaires. Some are even innocent and wouldn’t be in prison if they’d had $5,000 to hire an average attorney.”
Contrary to the view that law enforcement is powerless to bring law breakers to justice, the members of SQ Reviews know how effective the criminal justice system is at obtaining convictions. It is so effective that defendants don’t even have to be guilty.
The National Registry of Exonerations (exonerationregistry.org) registered 873 exonerations that took place between 1989 and 2012, including 10 exonerations that occurred after the person’s execution. Between 2012 and 2014 the rate of registered exonerations increased by 46 percent to 1,304, and in 2015 registration set the record for a single year with 149 exonerations.
This is just registered exonerations. The National Registry of Exonerations investigated 1,170 exonerations (exonerations they don’t include in their register) that occurred “after it was discovered that police officers had deliberately framed dozens or hundreds of innocent defendants.”
Some people may think the 2,623 exonerations is a small number when compared with the 2.3 million people in prison, but we invite such citizens to read Bryan Stevenson’s “Just Mercy” to discover how crushingly difficult it is for an innocent citizen to secure exoneration in the United States.
After you’ve read “Just Mercy,” please answer this: For every 146 exonerated in a record year like 2015, how many thousands weep in their cells because their stories of innocence aren’t clear-cut enough, procedurally valid enough, for exoneration by our murky system?