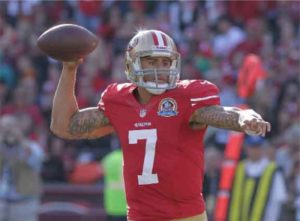 Cheers erupted throughout the cellblock as the Kansas City Chiefs scored another touchdown on the New England Patriots in the National Football League opener. As Ronald Bruce “Sky” Carter, a NFL fan for 30 years, heard the celebrating from inside his cell, he felt a temptation to turn on his personal television set to watch the game. Then he shook his head no, picked up a black history book, and stuck to a decision to support Colin Kaepernick.

“I thought it would be a hard sacrifice, but it’s the least I could do,” Carter said. “It might not make a difference, but this is the only way I can show support for him standing up for us. He’s losing millions, I’m losing nothing.”

On Aug. 23, several thousand showed up for a rally outside NFL headquarters in New York City. Boycott of the NFL has been called for over the perceived blacklisting of former 49er quarterback Kaepernick because of his stance against racial injustice. Specifically, Kaepernick took a knee during the national anthem to protest police shootings of unarmed black men. He also showed up to press conferences wearing t-shirts with figures like Malcolm X, Huey Newton, Fidel Castro and Muhammad Ali. While most incarcerated Black men support Kaepernick, many still plan to watch their favorite pastime.

“Oral history project the HistoryMakers (thehistorymakers.org) collects the stories of African-Americans who have shaped life in the United States.” The Week August 3, 2018

“Kap did a great thing but even people who supported him are going out to play in the NFL,” said Kahlil Dallas. “We need to be a little more serious about it. If you don’t want us to watch football, don’t play football.”

Dallas spoke about NFL player Michael Bennett, who police pointed a gun at and who advocates against racial injustice at the hands of cops, but still suited up this year—along with the other 70 percent of NFL players who are persons of color.

Dallas added, “I can see there are many other steps that need to be implemented before beginning with the NFL. There should be a protest banning the ‘Star Spangled Banner.’ That won’t alone fix our problems in America, but at least you won’t have an anthem empowering killing a slave. How about some Jazz or Tory Kelly and LeCrea?”

Carter, who works as an assembler for the Prison Industry Authority (PIA), believes that if the NFL has a million fewer viewers, Kaepernick will get a job.

“Personally I feel like [Kaepernick] is not good enough,” Kelly said. “History suggests you can get away with anything if you’re good enough in the NFL.”

“You mean to tell me the dude from the parking lot is better?” Taylor asked. “All the brother (Kaepernick) did is take a knee and he can’t get a job?”

Taylor refuses to watch or listen to football this year, as long as Kaepernick, who threw 16 touchdowns last year with four interceptions, remains unemployed.

Carter believes that while the NFL has excused shooting yourself in the leg, dog fighting, domestic violence and even murder charges, speaking out against the national anthem is considered sacrilegious.

“They will give the KKK a permit to spew hatred,” Carter said. “But a Black man speaking out in the workplace is too boisterous.”

However, Sports Illustrated listed 55 players who continue to protest the national anthem in various ways.

“All the guys that did stuff in the NFL they allow the luxury to play—for how long?” Carter said. “Owners make billions, but just like convicts keep the prison system going, the NFL would be nothing without Blacks.”