When the guard shack fell on San Quentin’s Lower Yard, it wasn’t an accident or an earthquake — it was inmates tearing it down.

Charlie Spence drove a forklift, circling it four times, bringing down the old 7-foot-by-7-foot shack. Watching with anticipation, his co-workers cheered until the final bits hit the dirt.

“Driving the forklift for this project was a challenge,” Spence said. “We had very little room for error.” The certified forklift driver added, “The guys wouldn’t have been happy with me if I tore the roof off. I would have never heard the end of it. This made it fun.”

The shack, with its old and rotten wood, looked ancient — a real aesthetic challenge in the prison known for its historic property and buildings.

When the shack laid in ruin, Spence’s co-workers took to a jigsaw, cutting the old thing to pieces.

Marco Villa, a shop leader, grabbed a sledgehammer and banged away as he yelled, “Look at Marco getting his workout!”

The men used hammers and crowbars to finish off the roof. About an hour later, the crew shoveled and brushed away the leftovers, throwing everything into a dumpster.

It was a team effort, plotting the shack’s takedown on March 21.

Next, the forklift raised the concrete slab, removing what was left from the foundation. Again, the men pounded away with sledgehammers. The cleanup finished, the ground was graded for a new foundation.

While taking down the old shack was fun, the real work came next. These men are all part of a program that teaches them the latest construction technology. They applied these newfound skills to build a new guard shack. 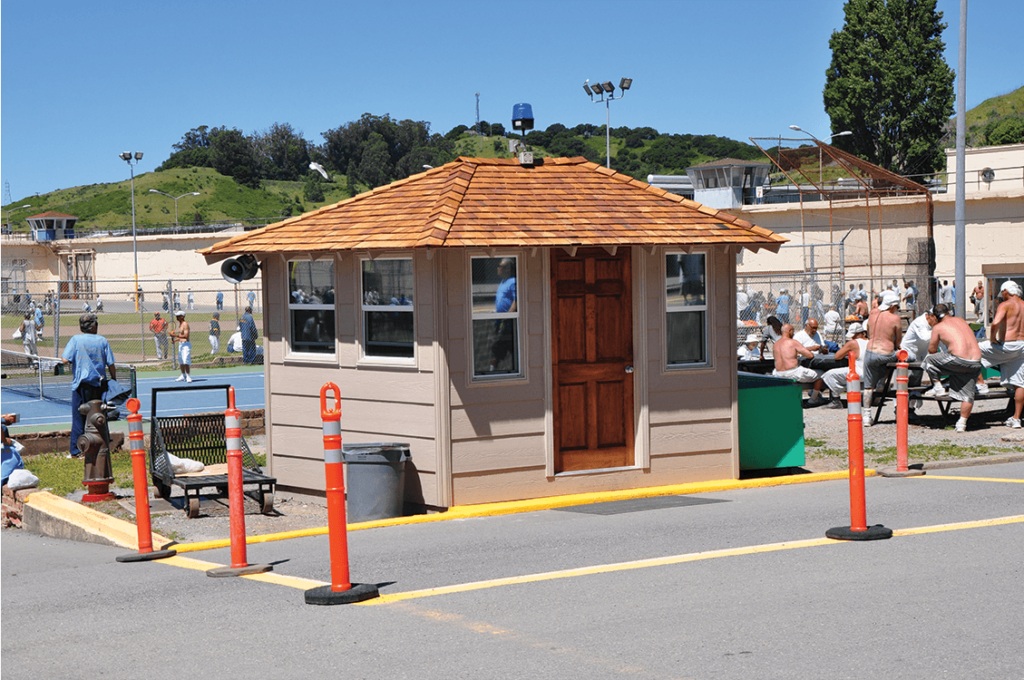 The instructor, Dante Callegari, has graduated dozens of men from this program — so many that outside employers call the prison asking if there are graduates being paroled.

“Most of the students in this program have demonstrated a willingness to learn, which makes my job much easier. It’s another way to help prisoners,” Callegari said. “They learn masonry, roofing, pipe-fitting and, most of all, safety.”

The program is an opportunity for younger men to learn a trade that will carry them for decades, Villa said.

Villa has been in the program about three years. He has experience in framing construction, but at San Quentin he said he has acquired knowledge of the entire construction process.

“We build everything from the ground up,” Villa said. “Foundations, concrete, rebar, trenches, plumbing, setting blocks, floors, walls and roofs.”

“Education is important for everyone; however, working in construction brings value,” Villa said. “This kind of work is essential in everyday life.”

Beltranchuc Tare, another student of the prison’s college program, said learning the ins and outs of construction has provided him with new tools that will increase his chances to obtain a job as soon as he gets out of prison. “Tools that I can teach my son and leave him a legacy,” Tare said.

“I appreciate this education, especially since English is my second language,” Tare said, adding that the vocational program has also allowed him to interact with different races and understand different cultures.

“In the past, I was selfish,” Beltranchuc said. “But working in this environment has allowed me to develop compassion and empathy for others.”

Callegari’s program gives men a real skill set that is transferable to real-time experience. He said his students learn and develop a work ethic far exceeding his expectations.

Callegari has been an employee of the California prison system for 28 years. He has taught at California State Prison-Solano and California Correctional Center. He has two credentials granted by the Commission on Teacher Credentialing as well as OSHA training.

Through his teaching, construction technology at San Quentin is reaching new heights in providing training for inmates.