Sierra Conservation Center (SCC) in Jamestown offers inmates a variety of vocational education programs such as auto mechanics, auto body, carpentry, masonry and welding, according to a Union Democrat article by Giuseppe Ricapito.

Inmates in the vocational program at SCC hope to improve their employment opportunities when released, according to the article.

Upon release from prison, if inmates are able to explain and demonstrate familiarity with a certain kind of equipment, they are more apt to be picked up for a position, said Vocations Principal Chris Sedler.

Inmates in the auto body class restored a Calaveras County Sheriff’s Office patrol car. They removed dents, stripped the car to the bare metal and painted the car.

“I learned a skill that made me feel like I should never be broke again,” said inmate Brian Thorne, who has been in the program for six months. “If you know this stuff on the streets, you probably would never end up here (in prison).

“You learn in incremental steps. When you’re on the outside, it’s all about money issues. That’s why people end up here,” Thorne concluded.

Rick Garza, SCC auto body instructor, added, “This trade means they can get a job anywhere.”

All California Department of Corrections and Rehabilitation prisons have education programs, but SCC falls into the “upper range” of what’s available, said Lt. Robert Kelsey, SCC Public Information Officer, according to the article.

Inmate Ryan Hays said about the construction program at SCC, “This is what I plan on doing. It interested me, and I like being in a construction field and building things. Making something out of nothing, ya know?”

Instructional assistant to the carpentry class DeAndre Parker added, “I didn’t like playing in the mud. I didn’t like burning myself. But I like working with my hands.

“When I’m finished with this, I’ve got something everyone can see.” 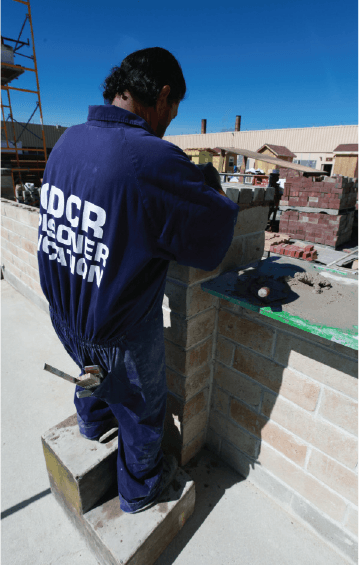 Parker now earns 37 cents an hour after he completed all five levels of the carpentry course, the article noted.

The masonry class is currently building a domed clay-brick pizza oven for a 2017 contest, according to the article. Inmates in the masonry class won first place with a brick barbecue oven in 2006.

“It makes me feel good that someone out there might use it,” added inmate Kenneth Powell, referring to the pizza oven.

Inmates have submitted projects to the California State Fair at Cal Expo in Sacramento.