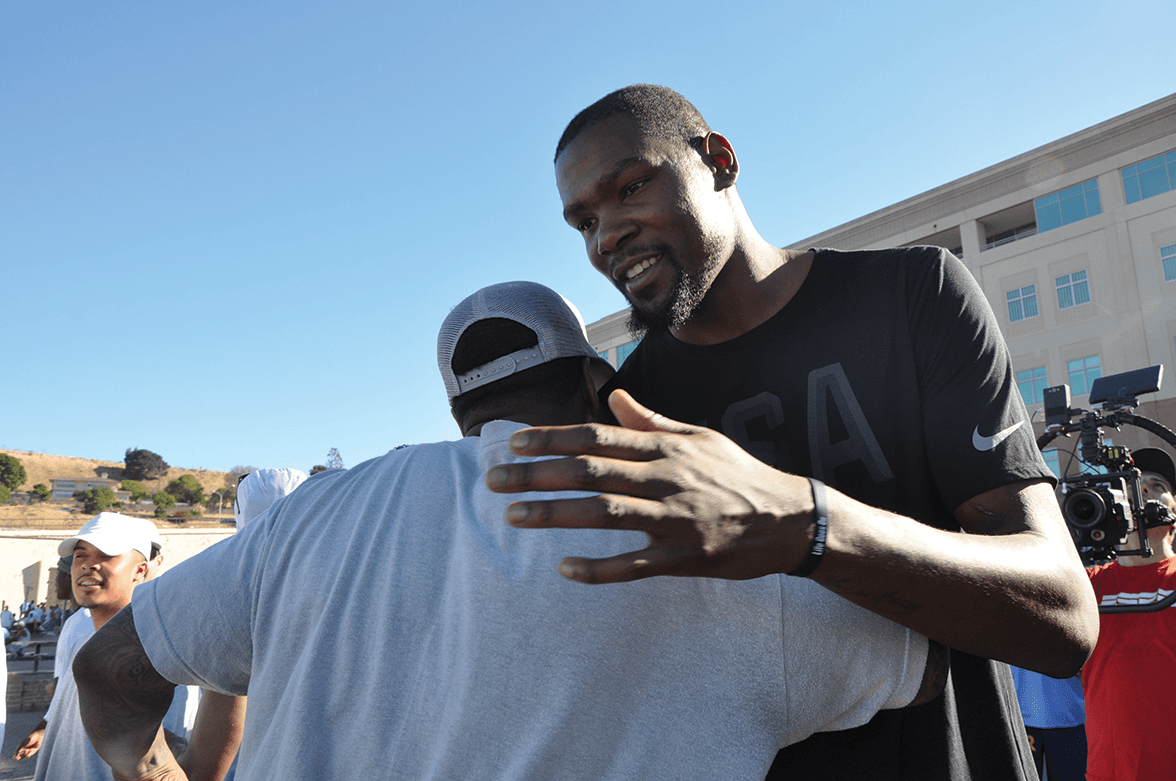 A parade of Golden State Warriors, including Draymond Green and Kevin Durant, made their fifth annual visit to San Quentin State Prison for fellowship, fun and basketball.

Golden State General Manager Bob Myers, Assistant GM Kirk Lacob, and Assistant Coach Willie Green were also among those who marched down the hill leading to the Lower Yard on Sept. 24.

The Golden State squad won the game 77-68, bringing their record against the San Quentin Warriors to 4-1.

“I always look forward to coming back here,” said Draymond Green. “Growing up where I grew up at, I have homies doing time. We were all one mistake away. I’ve had my share of mistakes, some real recent. Things can change, keep your head up.”

Draymond first came into San Quentin during his 2012 rookie year and played dominoes on the sidelines. Since then, he has won the 2015 NBA Championship and, along with new teammate Kevin Durant, Olympic gold.

Upon arriving on the yard, Draymond went straight back to the domino table.

He managed to win a few games this year.

Fans swarmed the NBA All-Stars who signed autographs and posed for pictures.

Montrell McDuffie, a 19-year-old San Quentin resident, said, “Seeing Golden State play shows us positive role models and makes me want to stay out of trouble so I can do something positive with my life and my time.”

“I’ve been with Kevin Durant all week in five cities,” said Paul Solotaroff, senior writer for Rolling Stone. “He is a righteous dude; he is very interested in social justice. He loves kids and helps rebuild basketball courts for them with his foundation (Kevin Durant Court Foundation).”

Members of the San Quentin Warriors greeted their old friends Myers, Kirk and Kent Lacob and the rest of the GS squad.

Both Warrior organizations prepared for this game.

“We had basketball in mind while hiring this year,” said Kirk. “All interns had to be 6-feet and better.”

GS Luke Locks, who played professional basketball overseas, added, “Basketball was a qualification. Can’t get in the door if you can’t hoop.”

Ninety minutes before game time, San Quentin’s Anthony Ammons shot free throws with a look of determination on his face.

“I want to win,” said Ammons. “When Bob Myers and KD walk in here, I want to show them I can play at their level. That’s my goal.

“On the streets making the NBA was a dream of mine,” added Ammons, who was sentenced to 102 years to life for a murder committed when he was a juvenile. “I’m fulfilling my dream in an alternative way.”

Just before tip off, the crowd gathered around center court and SQ Warrior Coach Daniel “Bear” Wright said, “Thank you for coming up in here where we are incarcerated and giving us this beautiful day.”

Myers responded, “Basketball makes things like this possible. Basketball gave a White guy (from the suburbs) a chance to get to know you. We love coming in here.”

Kirk, holding a box, spoke next, “I want to thank Bill (Epling), Don (Smith) and Ben (Draa) for helping make this happen. Now you (SQ) guys are wearing our old jerseys with the losing logo from when we didn’t make the playoffs. We decided to donate new jerseys; if you win, you can keep them,” he joked before opening the box and revealing blue Warrior practice jerseys.

The starting five for GS didn’t include Willie Green, who played in the NBA for about 10 years, mostly with the Philadelphia 76ers.

SQ gained a 10-6 lead with Myers scoring all six GS points. Then Willie entered the game. After missing his first two shots, he nailed a trey in the face of SQ Allan McIntosh, making the score 10-12 SQ. After a McIntosh miss, Demarco tied the game with a layup.

Casey Hill, coach of the Santa Cruz Warriors, who won the D-League Championship in 2015, came off the bench and shot a trey that missed the rim but was caught in mid-air and finished by Myers.

SQ Tevin Fournette tied the score 14-14 with a short-range jumper.

The first quarter ended with a Willie layup putting GS ahead 18-14.

In the second quarter, SQ was within two at 25-23 when Kirk dropped a three-pointer, making the score 28-23, with four minutes left in the half. The second quarter ended with GS up 34-30.

“I’m broke. I’m broker than broke, so could you slap me? I want to go to canteen,” he joked.

Draymond laughed along with the crowd.

Draymond said, “I don’t need that. Sometimes they mistake my competitiveness with attitude. If they call competitiveness attitude, they gonna have to keep complaining cause I ain’t gonna change.”

In the second half, McIntosh hit a jumper while being defended by Willie provoking a comical response from Taylor: “Willie Green just got exfoliated.”

McIntosh finished with 12 points on 4-18 shooting, well below his season average of 18 and last year average against GS of 24.

Despite San Quentin’s lost, many consider all the annual games wins.

“Today was a success even though we lost because we got to meet and greet superstars of the NBA,” said McIntosh.

Kirk said, “The Warriors win no matter which one.”

Wright said, “This is unbelievable – to be in prison and be able to associate with top people in the NBA. It’s unbelievable.”

“Playing against a 10-year NBA vet is something new. I never had coaches, I taught myself how to play ball,” said Fournette. “I am grateful and blessed to come across this experience. It makes you feel like you are still human, that society hasn’t forgotten about you. Plus Draymond, KD and Willie told me I had a good game.”

Willie added, “For me, today is more about the experience and chopping it up.”

“This is an amazing thing that they (GS) do,” said Hill. “It makes me proud to be part of this organization.”

Kent said, “Obviously we want to win, but the most important thing is being with you guys. I love seeing these guys progress as men. The atmosphere you guys create makes us feel so welcome.”

Before leaving, Durant said, “Everybody was so cool, generous, showed a lot of love. I didn’t feel like I was walking into San Quentin.”