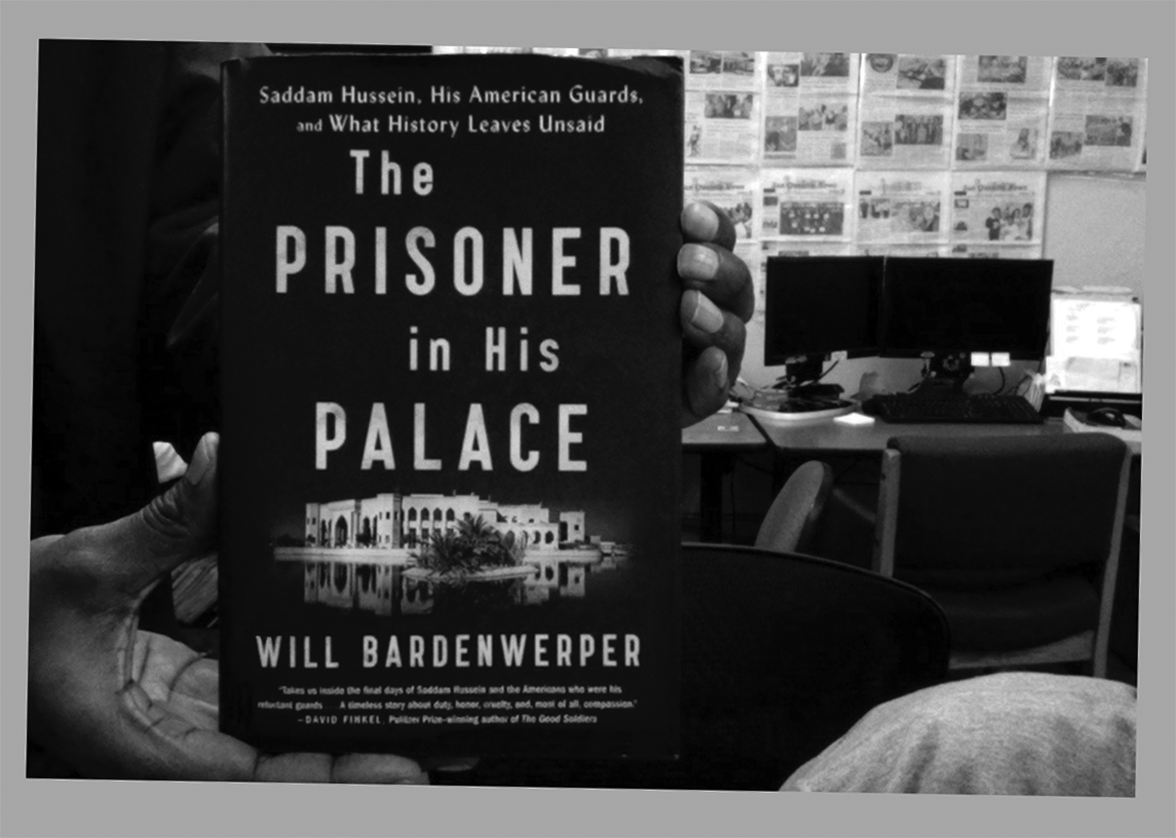 What history leaves unsaid will always be a point of controversy, especially for the defeated or the powerless. It is the job of the all-inclusive historian to look back and find parts of the record that are missing in order to put everything in place—to balance the interpretation of what took place.

The Prisoner in His Palace by Will Bardenwerper (2016) is about Saddam Hussein’s last days.

Bardenwerper, a military veteran, waited 10 years after Hussein’s execution to give readers a look at the man considered to be a butcher by many, while those who guarded him saw grandfatherly qualities in this so-called enemy. He was under the watch of a dozen U.S. military policemen — called the “Super Twelve” — whose job it was to keep him alive and well to stand trial.

The contrast between what the American public knew about Hussein and the man the American guards experienced is striking and echoes many of the relationships between inmates and guards at San Quentin. The intimate interactions, over time, allow prison staffers and correctional officers to observe different aspects of inmates’ personalities and to recognize authentic changes in thinking and behavior in men serving time for horrible crimes.

In the book, there are minor experiences that have outsized meaning to the guards. An American guard receives a Christmas gift from Hussein — a candle along with poetry the former dictator had written. The guard was grateful and moved.

On San Quentin’s Death Row, there are men described as “the worst of the worst,” who still develop meaningful connections with guards. One poignant example occurred at a Death Row poetry slam last November. An inmate recited a poem dedicated to his son, and a correctional sergeant, who was affected by it, responded by saying, “By what you write, you guys are creating a legacy for your boys. Touch the people you touch and leave that legacy behind.”

The main focus of the book is the way the relationship between Hussein and the Super Twelve changed over time.

“At first, the MPs were careful not to engage him in conversation, limiting their interaction to chilly ‘yes, sirs’ and ‘no, sirs.’ But the soldiers spent twenty-four hours a day with him, broken into three eight-hour shifts, and some thawing on both sides was inevitable.”

The book highlights the complexities of a man like Hussein and how the beholder affects perspective. The FBI’s assessment of Saddam Hussein was that he was “someone who would exhibit a combination of extreme grandiosity and paranoia, no constraints of conscience, a lack of empathy and zero respect for the truth.” But Dr. Jerrod Post, founder of the CIA’s psychological profiling unit, referred to him as ‘the most traumatized leader I have ever studied.’” The doctor noted that Hussein grew up in an extremely violent part of Iraq and had witnessed numerous killings within his family.

In contrast to the official evaluations, soldiers who guarded Hussein saw him as a poet and a man who cared about his daughters intensely. Although the media portrayed him as a kingly tyrant who spent lavishly and owned palaces throughout the country, the American guards discovered that “he lived in ordinary houses and rarely stayed in those palaces he built … and genuinely didn’t like the luxurious life.”

“The Super Twelve had never gotten to know Saddam the dictator, only Saddam the imprisoned man. They believed they were doing the right thing in bringing some dignity to his existence.”

Throughout the book, Bardenwerper describes how the guards discovered commonalities with their prisoner. One of the guards, Hutch, had been struck by the fact that his grandpa and Hussein shared the same birthday, April 28.

“The way Saddam would just start telling a random story, out of the blue, reminded Hutch of his grandfather,” writes Bardenwerper. “Like his grandfather, Hutch realized ‘that was what Saddam was left with—his memories—and I was letting him talk.’”

Bardenwerper quotes the interpreter, Joseph, who said, “Will I miss Saddam the brutal dictator? Of course not. But will I miss sitting in the evening with him as a human being? Yes, I will.”

Humanizing a person like Hussein may seem impossible to most Americans, but The Prisoner in His Palace is an affirmation of human dignity even in people who have behaved horrifically and in situations where you would least expect to find it.