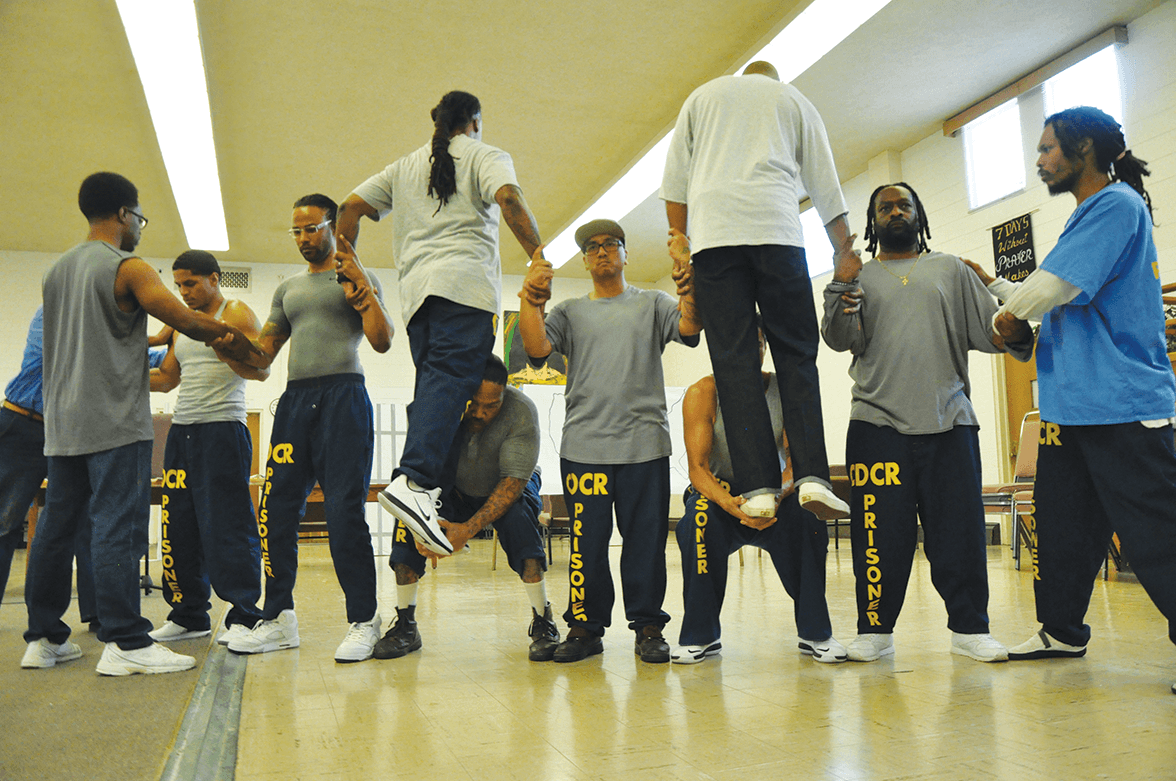 A prison chapel served as a theater to dance, sing, rap and use spoken-word for an inmate performance, called Site Unseen. The audience of free people and men-in-blue walked across a makeshift stage and sat side by side to enjoy San Quentin’s Artistic Ensemble.

“I’ve been in this room hundreds of times and each time it’s transformed differently,” observed Billie Mizell, executive director of Insight Prison Project.

Amie Dowling directed the performance for an audience of about 125.

“It’s amazing the amount of spaces that we occupy and then occupy them in new ways,” Dowling said. “It’s a metaphor that those in them can be transformed.” 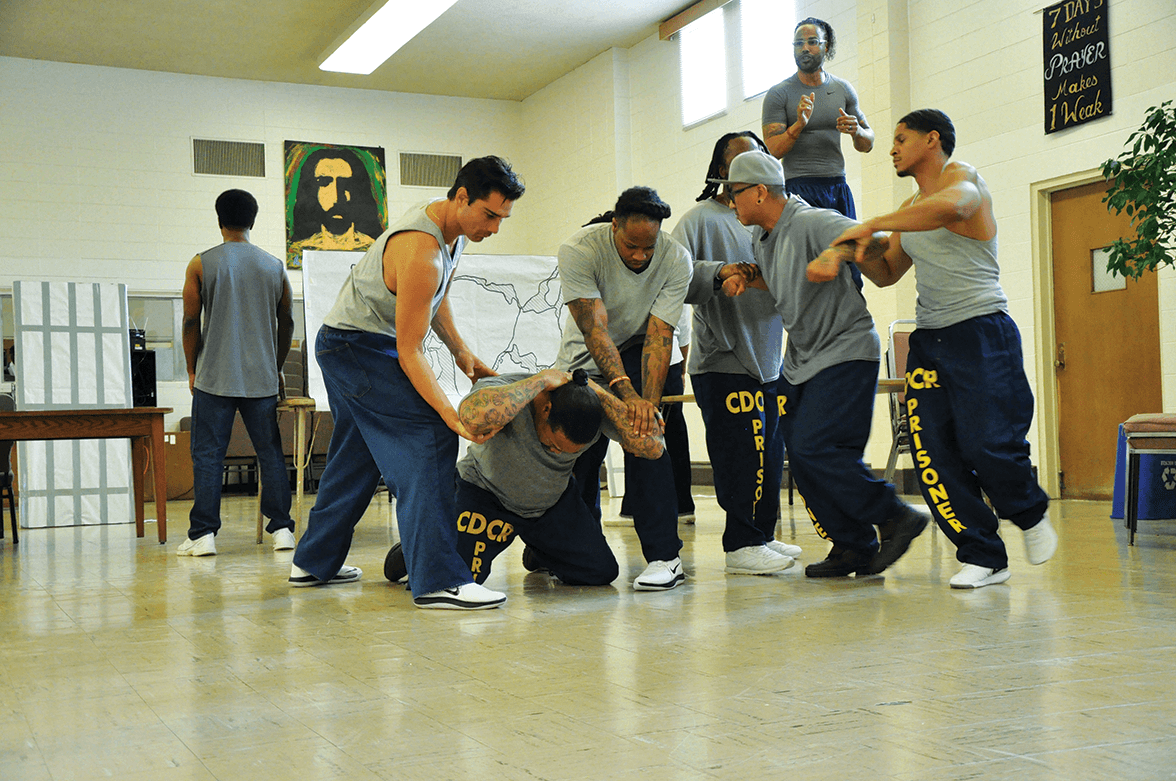 Ira Perry being detain by ICE

Rauch Draper sat on the top of a desk in the middle of the stage. His white tie and oversized glasses gave him the look of a newscaster. His dreadlocks hung over his shoulders as he read from cue cards.

“I have to keep reflecting on how I see myself,” Draper said referring to collaborating with the other actors. “It’s really hard to deal with everybody. Before, it used to be all their fault. Now, I’m able to look at myself and see I have issues, too.”

Cell doors painted on sheets hung in the stage’s background to create a prison look.

“At this time, you may choose to use your perspective adjustor,” Rauch told the audience.

A small square cut-out  hole in the program’s center served a viewer for the audience to look through as “God Bless America” blared. 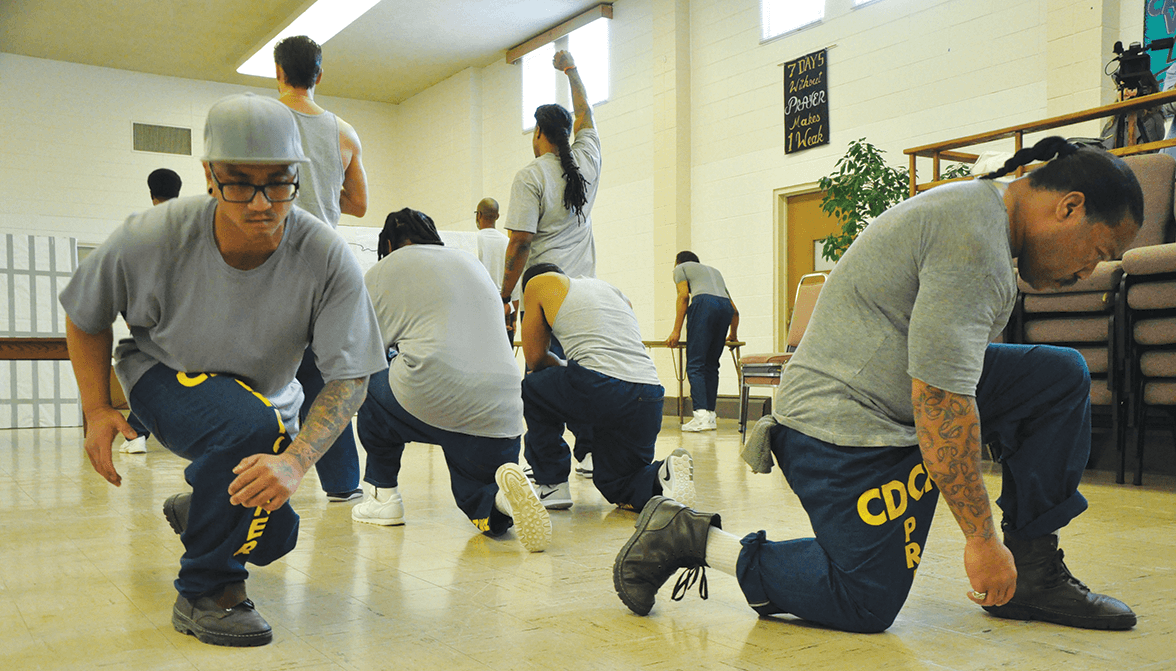 By way of spoken-word and rap, Nythell “Nate” Collins took the stage to talk about social justice and equality.

Next to Collins, four actors sat in chairs to form a square. In the distance, two others sat with bowed heads; two others stood stoically with fists in the air — like the Black athletes’ civil rights protests at the 1968 Olympics.

Jimi Hendricks’ “Star-Spangled Banner”  blared as actors kneeled, stood at attention, held hands over hearts and saluted as inspired by the music.

LeMar “Maverick” Harrison stood in front of a USA map with mysterious borders. Harrison used spoken-word to talk about the effect of U.S. criminal justice policy on society.

Draper cut in: “Many nations choose to round-up its men with the criminal gene.”

Edmond Richardson took center stage to talk about the adversity he faced as a youngster. His absent father affected him emotionally. Several actors represented Richardson’s emotional pain by violently running into him as he tried to stand his ground.

“Your piece was the most visceral,” an audience member told Richardson during a Q&A session afterward. “I felt it when your body was being hit. Your storytelling in that piece was amazing. I don’t know how you controlled yourself.” 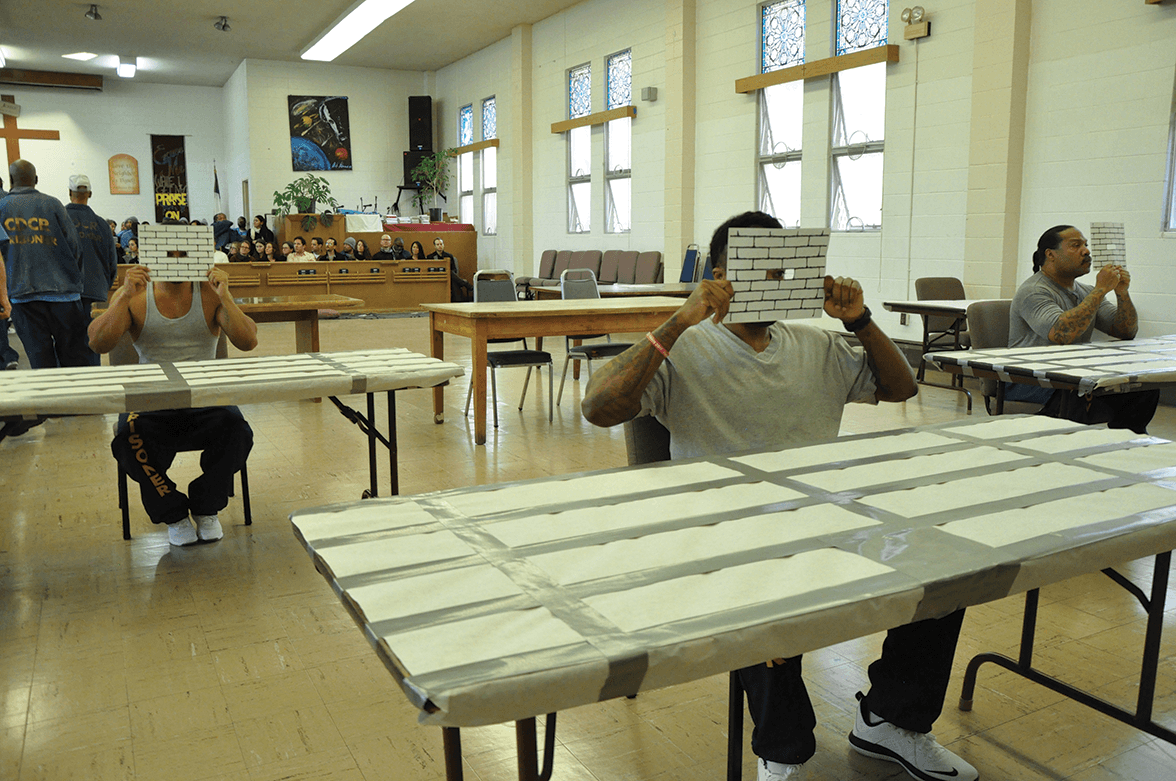 Chris Marshall played a quarterback and lined the actors in an offensive formation—the point, “my body is a tool,” Marshall said. “To be connected, you have to ‘listen’ to body language. These are stories told without words.”

Collins talked about prison being a dark safe place of sanctuary— “there I could escape ridicule and judgment. I dreamed the impossible. In my space, I became limitless.” 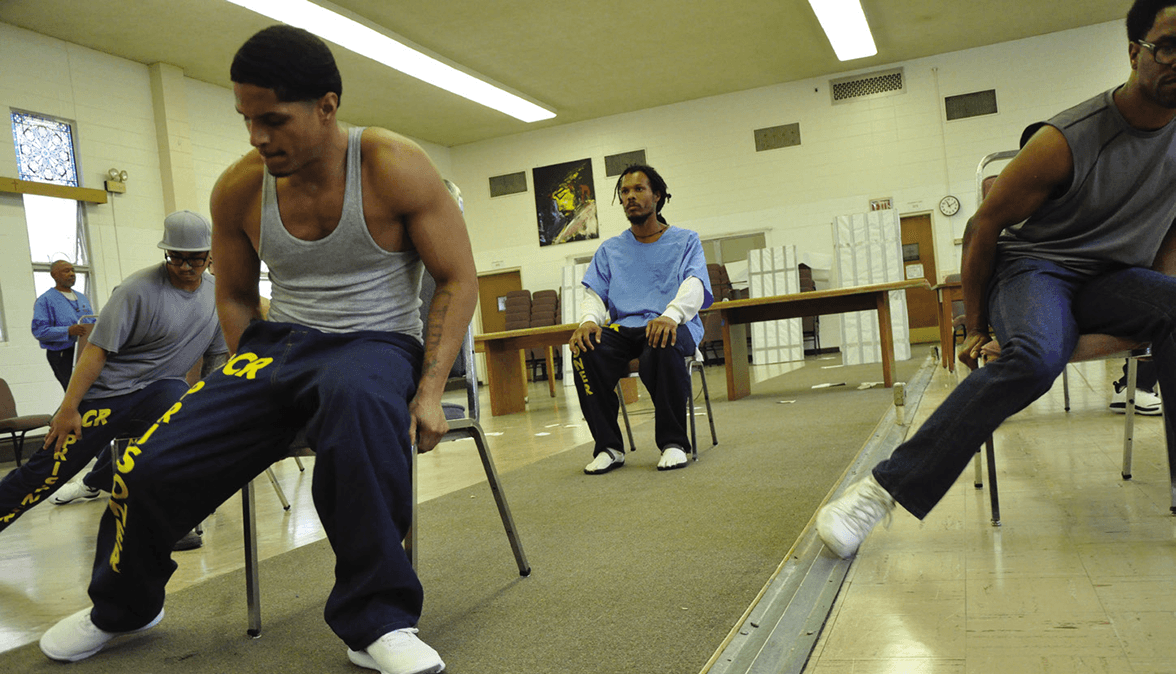 Edmond Richardson dealing with life as a youngster

Ira Perry sat center stage and indicated he was hiding in plain sight.

“You don’t know me,” he began saying in different languages. He then began telling his history from living in Los Angeles.

During the Q&A session, the actors were asked what they found out about their lives from participating in the artistic project.

“Some guys have movement, some language. There are many talents, and we put it together to make it work,” Anouthinh “Choy” Pangthong said. “We are stronger together, more efficient.”

“Living free, after police arrested a totally naked man in a ‘yoga-like pose” at a Planet Fitness gym in New Hampshire.” The man claimed he believed the gym’s slogan that it’s a “judgment Free Zone.” The Week August 3, 2018

Collins added, “The diversity helps us become better at things we may not be good…being able to take experiences in our life, and tell them in ways that society could understand what we experience.”

When asked how they are about working together, Emile DeWeaver said, “We argue a lot, then we make up and hug. Draper added, “It’s really tricky.”

A spokeswoman from California Lawyers for the Arts: “I came here for inspiration, and you gave that to me. You are doing good work for our country. We want to expose the nation to the artists in prisons. Other states need to know about the work that you are doing. We need you outside.”

George Galvis of All of Us or None: “We have to speak in our own voice. Culture is healing.”

“A Tennessee man ended up in cuffs after he ditched his date, stole her car, and used it to take another woman on a date.” The Week August 3, 2018

Harrison: “We have to find the truth. Before we can help others, we have to ourselves. That’s what IPP teaches us.”

One inmate said, “Look at what  we can do, if we come together. I have never in my 23 years in doing time, seen anything like this. I would like to encourage you, brothers, to continue. It was flawless.” 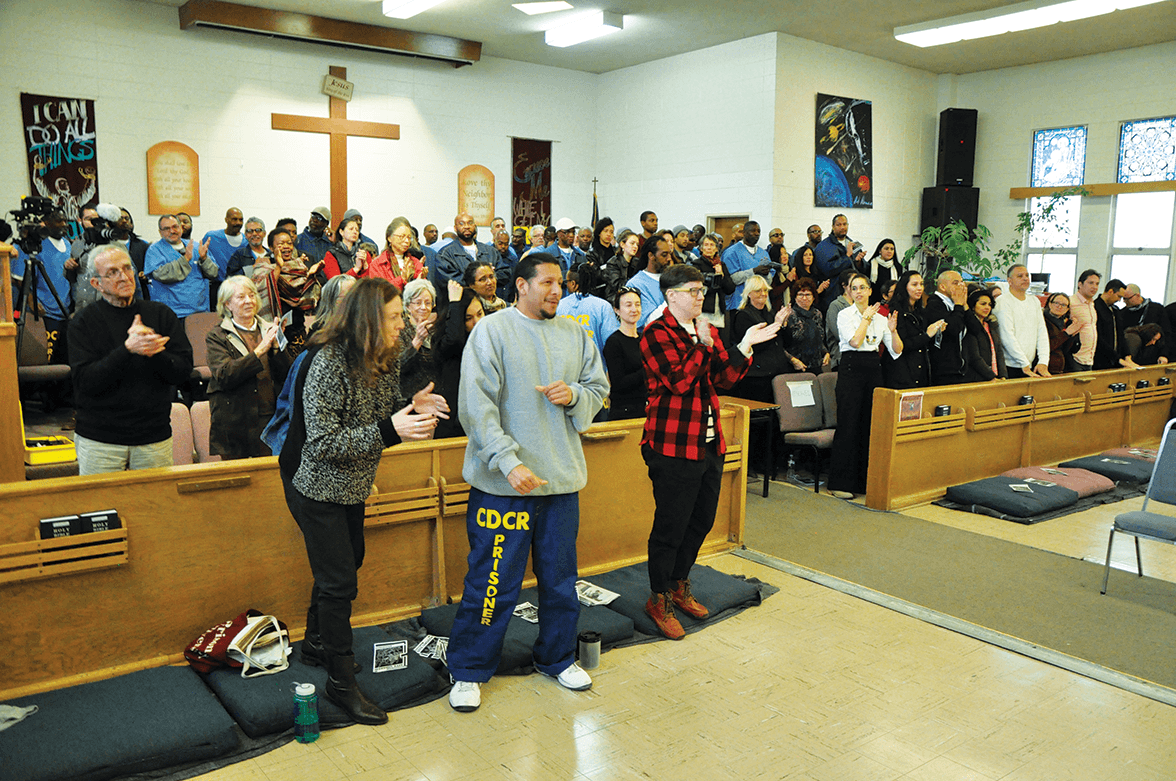