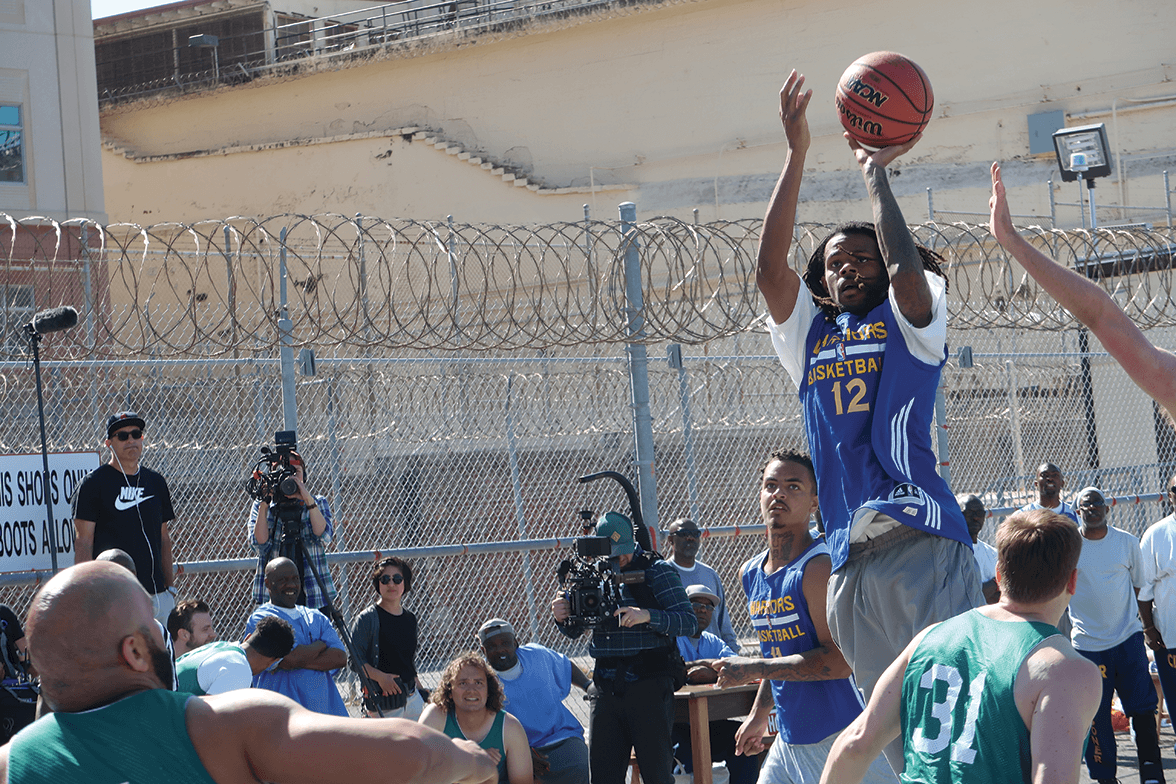 The San Quentin Warriors won their season opener over the Green Team 60-59 with a clutch turnaround jumper in the face of a defender, a lot of help from their bench and closeout defense.

“This game was all defense,” said Warrior Tevin “Cutty” Fournette, who made the game winning shot. “From the opening bell we focused on defense.”

Warriors Coach Rafael Cuevas added, “Nobody played a part that’s too small. Everybody got the win.”

The sun shone down on the green-blue court as a camera crew taped the opening game for a documentary. Golden State Warrior Kevin Durant is the executive producer, along with Heist media’s Jordan DeBree and producer Rebekah Fergusson who made the “futbol” documentary Pelada, which is Brazilian slang for pickup games. Michael Tolajian is the director.

“While basketball is the main plot, this story will go way beyond the white lines,” Tolajian said. “Many consider inmates villains; this is a chance to show that people can change and become the hero. I’ve met with ATL, Ant (Ammons), (McIntosh) and Rafael and have come to see them as human beings, who have flaws like any of us. Then to see (McIntosh) with 25-to-life for a non-violent crime is heart wrenching.”

Prison Sports Ministry’s Green Team, which has a roster of more than 40 players, including former overseas pros and All-American college ballers, showed up with Dan Wohl. He played for Williams College, then pro in Israel.

Sponsor Patrick Lacey also had several former Claremont-McKenna teammates, including 2017 graduate Riley Hall, with him for the opening game.

“It’s awesome to be back; I hate it when the rain comes, and we have to take time off from coming into San Quentin,” Lacey said.

Warrior guard Love added, “You have people out there willing to give us their support – it gives you back your humanity. It’s more reinforcement to be accountable and stay out of trouble.”

In the first quarter, the Green Team took an early lead but the Warriors inserted 19-year-old Frazee from off the bench and gave his team a spark.

He immediately nailed a three pointer in the face of a defender, but it arrived a fraction of a second after time expired on the clock. The quarter ended with the Warriors down 15-11.

In the second quarter, Frazee made a three that counted and helped his team catch up. He ended the period with five points.

Warrior point guard Cook, at 5’4”, played big. He went to the rack strong and scored in the chest of a defender.

“Often we hear things but don’t listen,” Smith said. “God can speak through earthquakes, wind storms and whispers; don’t miss what God has in store for you.”

McIntosh, who guaranteed the Warriors would win before the game, had only 4 points at the half.

“I said we would win; I never said I was going to do it on my own,” McIntosh said with a smile.

In the second half, “ATL” Smith and Harris’ back-to-back buckets put the Warriors ahead.

First “ATL” Smith made a reverse layup, followed by a basket by Harris, which put the Warriors up 32-31.

The 6-foot-6, 230-pound “ATL” Smith added another two points with a “you can’t stop me little homie” move in the paint.

The Green Team charged back in the fourth.

With 3:30 remaining to play, Wohl fed Hall who tied the score at 56 with a layup.

The Green Team fouled Warrior Frazee, which sent him to the line. He hit both free throws, which gave the Warriors a 58-56 led.

Again Wohl connected with Hall for a hook shot and tied the score at 58.

Hall was fouled with 23 seconds left in the game. He made one free throw, to give the Green Team a 59-58 led.

Warrior Coach Cuevas went to his veterans to close the game out. McIntosh, Shells, Smith, Price, Sr. and Fournette played the final minutes.

Fournette, with Hall pressed on him, made a 10-foot jumper over the defender’s hand to put the Warriors up 60-59.

With 10 seconds left, Wohl dribbled the ball down court, determined to go coast-to-coast, but Smith cut the lane off, and Wohl lost control of the ball.

“It was a great game,” Lacey said. “I thought we had it. We needed one stop and Cutty (Fournette) made a great play.”

Wohl added, “This is like a highlight of my week; it combines so many things I love – I enjoy the competition and building relationships.”

Wohl led the Green Team with 19 points followed by Hall with 17. Lacey didn’t score any points, but he had 7 assists, 5 rebounds, 2 steals and a block. New Green Team point guard John Smith had 10 points and 3 assists.

Harry Smith led the Warriors with 14 points and 14 rebounds. McIntosh had 12 points, Fournette 7, and Frazee 8.

When the cameras came out, my team finally bought into what I was telling them to do all last year,” Cuevas said.