San Quentin paid tribute to Mary Donovan for her dedication to veterans programs.

Donovan is an inspirational beacon for many incarcerated veterans who are dealing with post-traumatic stress disorder (PTSD). She has played a critical role in the volunteer team that has helped build the Veterans Healing Veterans from the Inside Out (VHV) program.

Donovan recalls, “This all began about four years ago as a volunteer tutor with the Prison University Project (PUP). I was helping Marine Special Forces inmate Ron Self work on a paper covering therapeutic shared trauma narratives. He found this type of therapy proved especially effective for veterans struggling in the aftermath of combat trauma.

“It was impossible for me to look away from the men who had faced battles, who are by all definition brutally traumatized and/or morally stressed. I switched over from PUP to volunteer, facilitate and eventually sponsor the VHV Group that Self was starting up,” Donovan says.

The facilitators’ duties consist of being mediators, mentors, referees and cheerleaders. VHV attempts to unlock and release the intensive past residing within many of these tormented war veterans. This can be a long and, at times, grueling journey.

Gaining trust with each other is the first major hurdle. Donovan says that she breaks through these icebergs by sharing her own life’s ups, downs, tears, fears and inspirations.

As many of these veterans know, there is no such thing as a quick fix for PTSD. Many saw their best friends shot, blown apart and/or killed during the heat of battle and could not stop to mourn their loss. Writing these events on paper is sometimes the only way to recall painful moments and memories.

Another statistic that facilitators never forget is about 20 veterans commit suicide everyday in the United States, according to a study from the Department of Veterans Affairs. This amounts to approximately 7,000 deaths a year.

“I took on the role of director/coordinator when we got fiscal sponsorship from the Insight Prison Project in January 2014,” Donovan says.

One of the main goals at VHV is to let the nearly 400 SQ veterans and those at other prisons know that they are not alone. Their motto is, “I got your 6,” which means, “I got your back.” All SQ veterans are encouraged to try the ongoing classes.

“We have also expanded to Deuel Vocational Institution and hope to work with other prisons thanks to the new CDCR Innovative Programming Grant process,” Donovan states.

VHV inmate member R. Cooper said, “Mary understands the Yin and Yang of the group. I don’t think she realizes how much she truly brings to these groups.” 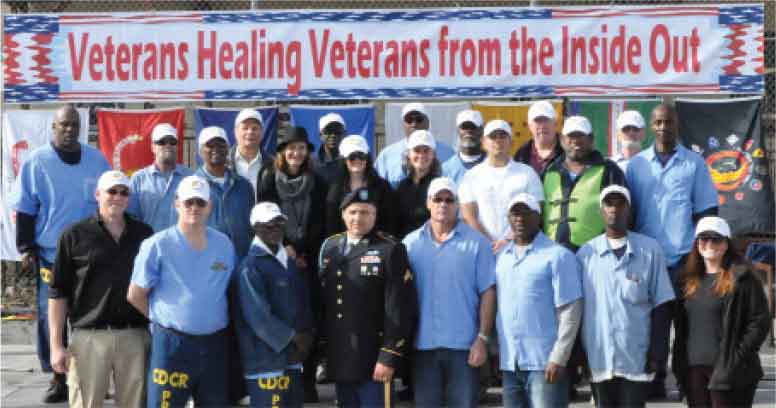 VHV inmate facilitator S. Gaskins agreed, saying, “Mary is an intricate part that is absolutely necessary. She makes us feel human after all these years of pent-up anger. She brings a calming effect that is critical during heated discussions, by providing other avenues and ways for looking at things.”

VHV member R. Coleman said, “Mary brings a feminine perspective that helps open our eyes to empathy and compassion for others.”

Donovan has a bachelor’s degree in liberal arts and a master’s degree in media studies. She uses her negotiating skills to assist the growing VHV community inside and out of prison gates. She attends senate hearings and conducts meetings with various local and regional veterans’ agencies.

After working with PTSD veterans, she contends that “there is a real need to raise awareness at the intersection of criminal justice and military junctions. All veterans returning from service and/or re-entering society from prison need stable housing to re-acclimate themselves to civilian life. We are poised to start a VHV group for outside veterans also.”

“I’ve learned so much about myself in the process of working with these veterans and their experiences. I am proud to be a part of this dedicated nation of men and women who have given their all for us,” Donovan said.

For more information, see the VHV website at veteranshealingveterans.org