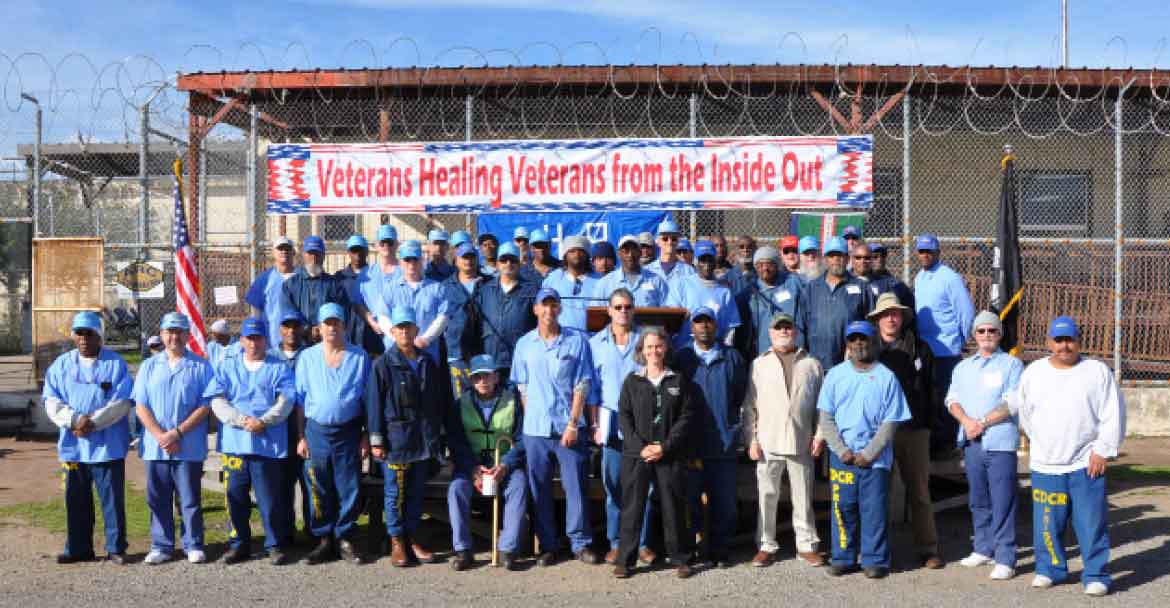 “Veterans need help” was the message that resonated in a play performed just days before Memorial Day by a group of incarcerated inmates representing San Quentin’s Veterans Healing Veterans from the Inside Out.
The performance was a back story about 12 veterans who shared personal reasons for joining the U.S. Air Force, Army, Coast Guard, Marine Corps and Navy.
“I joined the Navy because I have a great love for my country,” the sailor said. “I joined the Air Force because I wanted to protect my country,” said the airman.
Each veteran’s story was a personal insight into his enthusiasm for joining the military and supporting his country, but the eventual outcome of protecting the United States and its special interest throughout the world, leaves them in a deep, dark, desperate and depressive psychotic condition. There are thing in those experiences they will not forget.
Their stories revealed how the proud and few who served their country eventually became victims of the United States War Machine, a metaphorical description of the government’s passion for putting its resources on the front line throughout the world.
For years, veterans have been ordered to kill the enemy of the War Machine. This indoctrination starts in Basic Training and is drilled into their psyche during advance training or on battlefields.
Vietnam-era veterans were portrayed as despicable war mongers. After 9/11, the image of a veteran fighting in the Iraqi and Afghanistan wars was portrayed as a hero. Despite what war veterans serve in, they are trained to become a killing apparatus.
The play showed that once the veteran was removed from that environment, in many instances he became a liability. Returning to civilian life was a virtual nightmare. Family and relationships were strained and in most situations, destroyed.


|“No one really cares nor understands what goes on

in the mind of the veteran who lives

daily with the stress of killing another human”|

Their performances elucidated the problems of homelessness. In many cities throughout the country, veterans who make up a very large percentage of that population are alcoholics and dope addicts. Several actors played out their roles as alcoholics and drug abusers. In another reenactment, veterans were seen mimicking their military duties.
In one scene, the fury of Hell was released upon them. The veterans were seen struggling as they attempted to adjust to the normal routine of everyday life. Every thing he did was a challenge, filled with mental and physical anguish.
Throughout the performance, actors continued to demonstrate the effects of war. For many years, a quiet storm of mental depression never caught the public’s attention. One of the actors told the audience, “No one really cares nor understands what goes on in the mind of the veteran who lives daily with the stress of killing another human.”
The audience was given insight into how medical experts aren’t quite prepared to take on the many challenges the veteran confronts after spending time in these war zone battlefields, such as how evidence-based studies used to diagnose Post Traumatic Stress Disorder (PTSD) have not cured this illness; and that the Veteran Administration is a dysfunctional operation of applications, forms, contradictions and apathy.
For several of the actors, their performances gave them a real sense of purpose.
There is growing evidence that PTSD is a contributing factor to the high rate of violence among military personal.
According to Frontline, between 2002 and 2009, there were 14 murders committed by post-combat Army personnel stationed at Fort Carson.
One reminder for the American public that relates to the side effects of war is the number of veterans who commit suicide.
In the years since the start of the Middle East wars, more than 73,000 American veterans have committed suicide. In September 2009, 18 veterans were committing suicide a day. Today, that number is up to 22 a day or more than 8,000 a year, according to the Suicide Katz Study.
Ron Self, founder of Veterans Healing Veterans from the Inside Out, told the audience, today, by the time this performance ends, “12 veterans have already committed suicide. We need to save our veterans from these tragic consequences.”