For the San Quentin Inside Tennis Team (ITT), playing tennis on a prison yard with the University of San Francisco Tennis Team is like a reunion, but for newcomer Chester Boddie, the day was like being blessed with a second chance while still incarcerated.

About twice a year, USF Tennis Coach Pablo Pires de Almeida brings his players into San Quentin State Prison. The 20-year-olds who came on Nov. 11 hailed from Sweden, the Netherlands and Turkey. The USF team, who just capped off its season with an appearance in the North-West Regional semi-finals, played a few mixed games, ran drills and put on an exhibition. 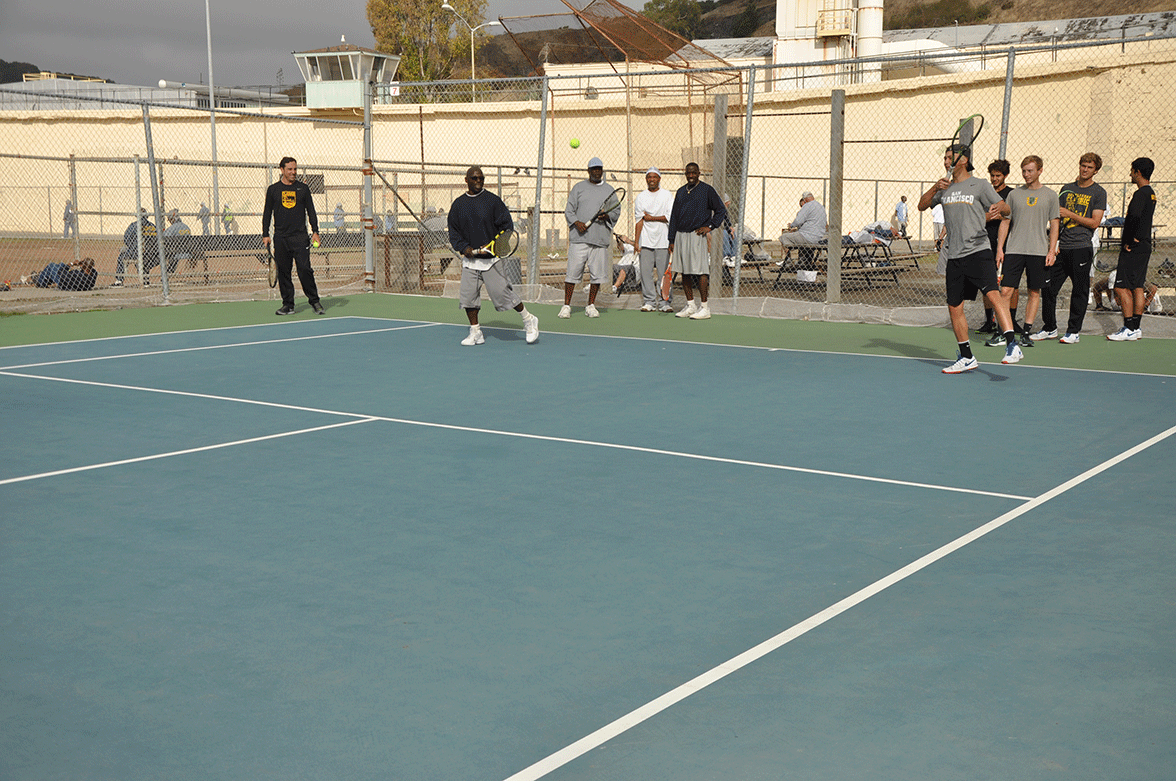 For a born-again Christian tennis enthusiast with plans to train pros, the exposure was a God-send.

“All praise due to the almighty,” Boddie said. “I’m glad they came in. I look at it as an honor.”

Boddie recently arrived at San Quentin from another state prison.

He first learned to play tennis while serving 21 years in the federal prison system.

Once freed, he started playing in United States Tennis Association tournaments with the intention of becoming a tennis instructor. He said they ranked him a 5.5 and pros rank a 7.

“I want to get youngsters and train them like the Williams sisters,” Boddie said. “I want to find people with the fire and cultivate them.”

Drug addiction brought down his plans.

“I stopped going to tournaments – that’s what the drugs do to you,” Boddie said.

After hitting bottom he was in misery and in pain. Boddie then decided to rob a bank with a fake gun. He failed to take the tracers out of the money before going home and received 20 years, 18 of which are from sentencing enhancements. He’s 61 years old with 12 years served of his time.

“I was tired of being in and out of prison,” Boddie said. “I was using drugs. I saw myself dying; I saw the pain of it. I couldn’t take it no more. I thought money would bring happiness. I knew about taking tracers out of the money, but forgot – almost purposely. Getting caught has been a blessing.”

During the visit with the USF team, the Christian teamed up with USF’s Paul Giraud and showed off his skills in a drill Pires de Almeida calls the Brazilian.

“The Brazilian is like a Chinese fire drill,” said tennis sponsor Martin Silverman, who escorted the USF team into the prison.

The drill consists of everyone lined up in pairs to challenge the King on the opposite side of the net. One killer overthrows the King or eliminates that opposing challenger. The King needs five points to win a game while the opposing team needs one killer to become the new King. Each ITT member paired with a USF player to form six teams lined up against the King. Giraud and Boddie held the court down, winning three games before being dethroned. Then they took their King spot back from ITT’s Paul “Black” Alleyne and Mert Zinzirli, 20 of Turkey.

“He (Boddie) is probably the most consistent player here,” Orlando Harris said. “He has a knowledge of the game some of us don’t have. He’s made the talent level go up.”

Zinzirli teamed up with Eric Moonga, 21, of Sweden, for an exhibition match against his USF team members Giraud and Marco Barretto, 22.

Tied at 5-5 and 6-6. The game broke when Alleyne lobbed the ball just over the net, turned and walked away believing Mert, who was behind the serving line, couldn’t get to the ball in time for a return. Mert charged forward, bent low and hit the ball underhand and over the net for the match point.

“Today was so nice,” Zinzirli said. “I love playing here. It’s lots of fun and a change for us, too.”

Both teams parted with smiles.

Meanwhile, Boddie hopes recent changes in the law will bring him home within five years to continuing pursuing his dream of mentoring the next Williams sisters. In the meantime, he is teaching the men at San Quentin.

“Getting opportunity to mess with tennis again, it’s like a blessing in disguise,” Boddie said. “I teach others to be alive.”