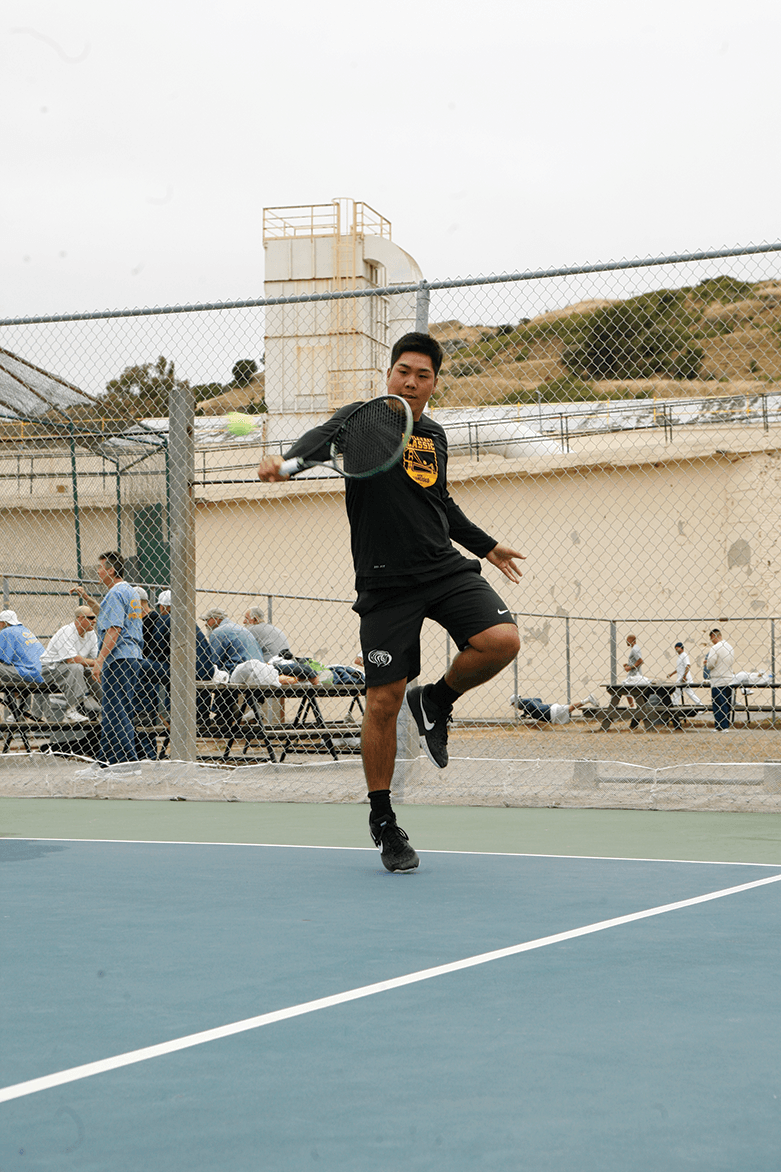 Students from the University of Pacific Tigers Tennis program came into San Quentin for a second time to play the SQ Inside Tennis Team (ITT).

San Quentin’s Earl Williams teamed up with Orlando Harris began the first match. They served the ball against the Pacific Tiger’s Adi Kremer and Ryan Redondo.

“Easy bacon,” Redondo said as Pacific sailed to a 4 to 2 victory.

Redondo is the Head Coach of Pacific Tiger’s. He’s played for U.C. Davis Junior Cup tennis team, won the world cup in Australia in 1998. Won World Championship in Junior World Tennis Cup in France in 2000 and the national doubles in college in 2001.

Allenye and Llarenas played like tigers. Instead of running to return the ball they skipped. Instead of holding the racquets beside them they held them in front. Instead of standing with their knees locked straight they knees were bent as they hit the ball left and right of their opponents. They beat Redondo and Thompson, 4 to 3.

Pires de Almeida also brings his Team inside to play the men.

Redondo said he see improvement in the Inside Tennis Team players since the last time he visited.

“The curiosity and passion to learn I recognized first in the guys is still there,” said Redondo.

ITT’s Robert Neyses, 76, watched the games, wishing he could play.

He started playing tennis 13 years ago, while living in Fremont. Someone gave him a Wilson tennis racquet, and a local park had just built a new tennis court.

He decided to give it a swing, and had been playing the sport well. Once incarcerated, he continued playing at San Quentin until he blew out the retina of his right eye in a tennis match.

“One of my biggest troubles is seeing,” he said  while watching the last game where Llarenas and Ronnie Mohamed beat Adi Kremer (PT) and Robert Barnes (ITT), 4 to 3.

“I was on the court playing, and I couldn’t see nothing but blood,” Neyses said, “I went to the TA, they put me under and operated on my eye, said I tore my retina.”

While awaiting eye surgery, he took eye vitamins with beta-keratin to see and help his cataract.

“I use to be good at slaying at the net, but now I practice with guys who can slay and I play the back,” he added.

After the last match up, Redondo suggested ITT all work on hitting drills together. Kremer and Llarenas caught and served the tennis ball on one side of the net. The men formed a hitting line on the other side of the net, and they practiced backhands, forehands, and volleys.

The University of the Pacific Tigers said they’ll return again in the Fall.