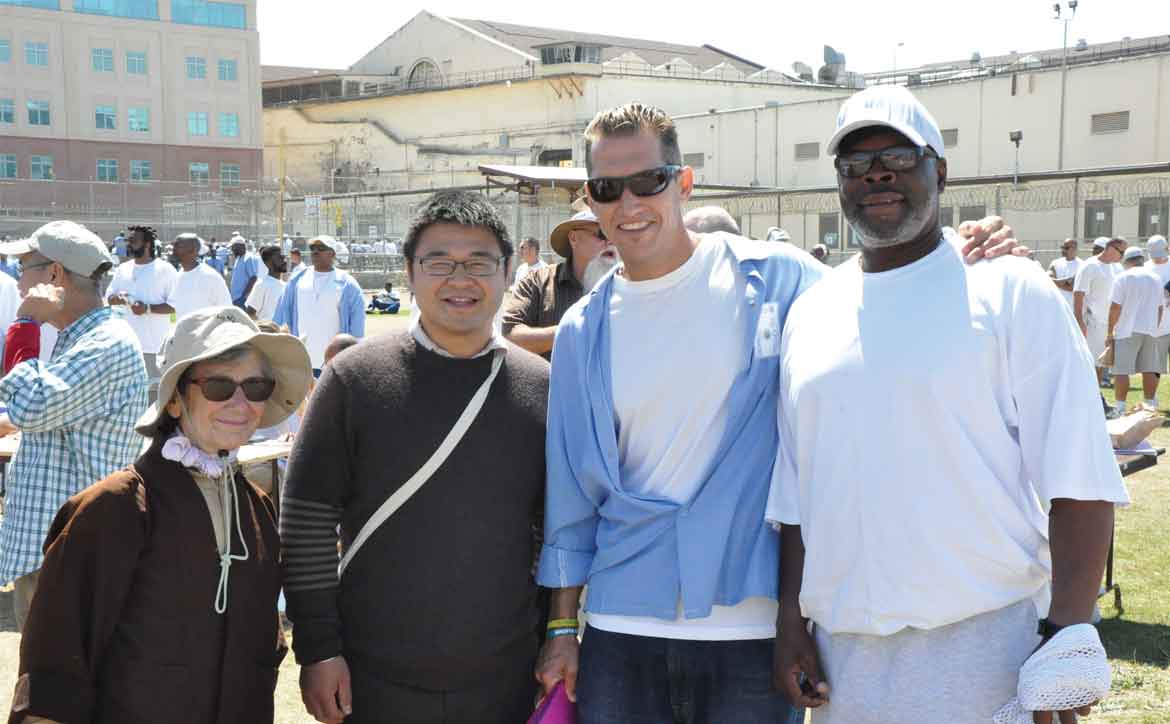 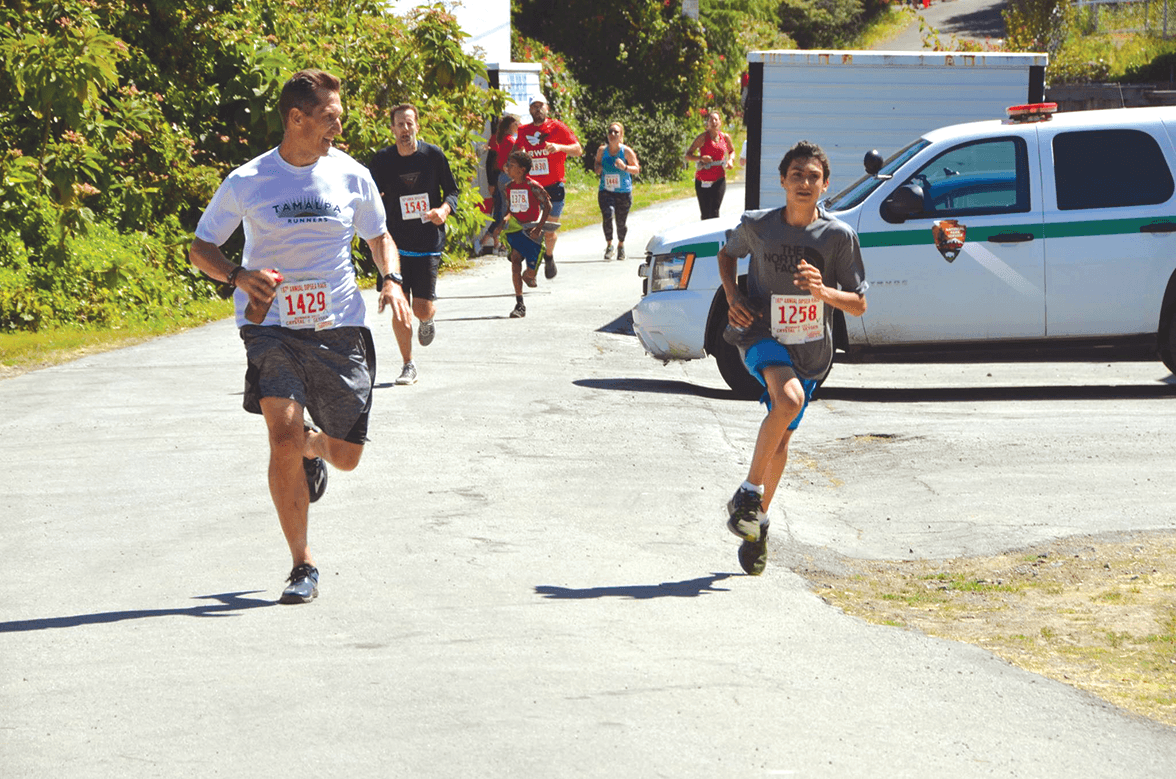 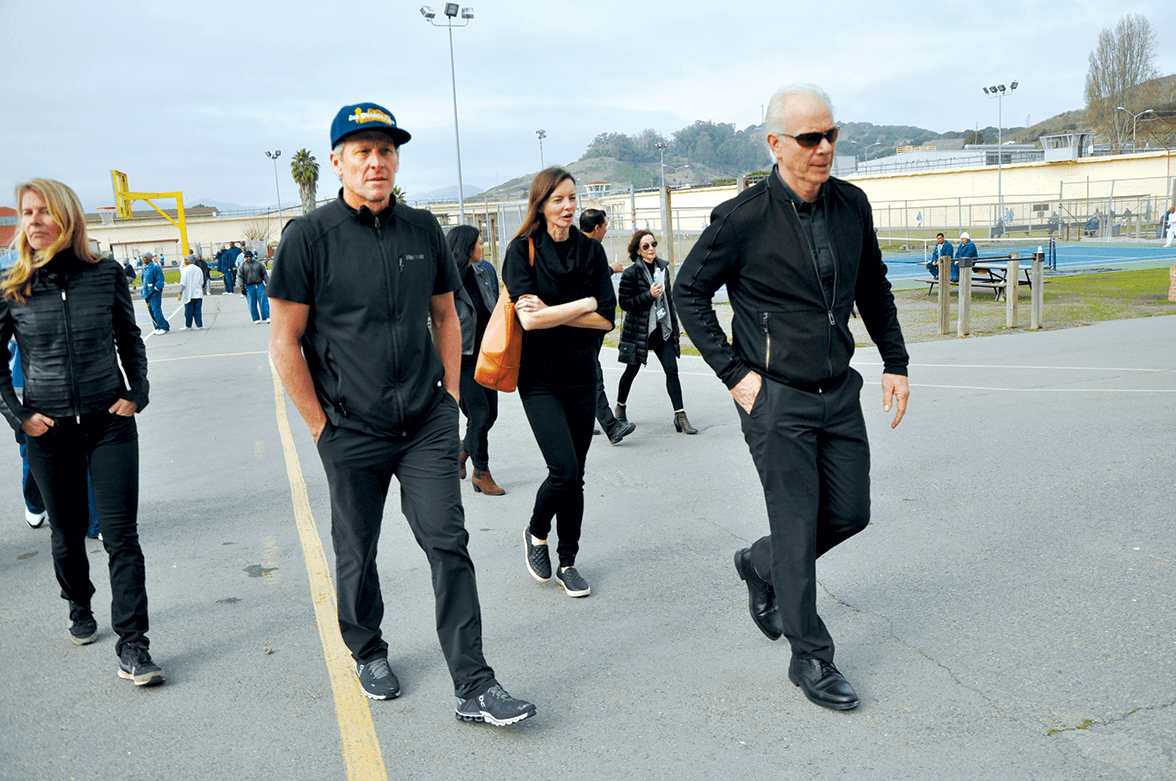 In a small classroom with popular catch phrases like Think Different and Believe in the Process on its walls, about two dozen San Quentin prisoners waited for a surprise guest—the world-renowned, once top cyclist, Lance Armstrong.

“I’ve never been in jail. But I know what it’s like to run afoul of the system,” Armstrong said, on Jan. 11, to inmates enrolled in a highly touted computer coding program.

“What do you expect?” Redlitz probed the students about Armstrong’s visit. “The unexpected,” several inmates chimed in. “You guys can relate to how life changes,” Redlitz replied.

Armstrong told the class that his life previously revolved around cycling and after falling from grace, he had to rebuild his life.

“I barely squeaked through high school and didn’t attend college,” Armstrong said, adding, “If it weren’t for cycling, hell, I may have ended up here.”

Code.7370 and their instructors posing with Lance Armstrong

The classroom went silent, and then everyone burst out laughing.

Armstrong said he made himself an easy target for the doping investigation by how badly he treated people.

“It was the level of arrogance that got me,” Armstrong said. “Once they compiled all the evidence, the case was made against me.”

In an attempt to rebuild his image after his fall from grace, Armstrong went on Oprah and sheepishly admitted wrongdoing… It did not go over well – he became the face of sports doping.

“The fall was so dramatic that people didn’t want to associate with me,” he said.

Armstrong has continued to address his past.

In an article written last year by Outside Magazine, Armstrong was portrayed as “a humbled man who is working to try to deserve the forgiveness of millions of people who once believed in him.”

He told the students that they didn’t have to endure the kind of public ridicule that he underwent. They could build a fresh start. However, he previously thought it would be difficult to convince an employer to hire someone who had been in prison for murder.

“When I asked Chris [Redlitz] how many people got out and came back, and he told me none, I was surprised. That’s the brand. That’s a super powerful message. You guys are part of a movement that is pretty damn surprising.”

He suggested that the men embrace their pasts and go forward. “It’s never straight. You can’t run from it,” Armstrong said. “In 2018, everybody knows everything.”

“Your reputation precedes you. Mine precedes me,” he said. “That’s a hurdle, but you have to get over it. Most people don’t even get to the door.”

“You guys are the example of forward,” Armstrong said, after learning that Mark Zuckerberg visited the program in 2015.

Damon Cooke graduated from the coding program in 2015.

“Once I decided it wasn’t about what is done to me, but how I respond, I found a deeper meaning to my life,” Cooke said.

In a continuing effort to address his conflicted past, Armstrong hosts a weekly podcast, called Forward.

According to Outside Magazine, “Forward is a very deliberately chosen word, and in fact, it defines Armstrong’s new narrative: others may want to or expect to see him curled up in a fetal position in the dark, but he is moving ahead, not allowing himself to be crushed by the weight of the past.”

Ultimately, Armstrong believes that having close friends and family are the most important things in life.

“Some of your friends stay with you,” Armstrong said. “Some lean in. Some lean out. When you get out of here, you’re going to know who your real friends are.”

Armstrong, the ultimate competitor, walked out of the classroom and across the prison yard. He saw the pull-up bar and jumped right on it, pumping to 10 quick chin-ups.

Not to outdo himself, after finding out about the San Quentin Marathon, he challenged the reigning champion, Markelle Taylor, to a run-off at the November meet.