The honor guard performing the ceremony

Incarcerated veterans at San Quentin on July 11 handed over a check for nearly $5,000 to a team of United States Marines. The money supports a program that gives presents to children who visit their incarcerated parents during the Christmas holiday season.

Toys for Tots provides the gifts to children 17 years and younger.

Marine Sgt. Higgins, Sgt. Anunciacion and Sgt. Hull joined Ramon. They are stationed at the Recruitment Center in San Bruno.

The check was presented at the Veterans Group of San Quentin (VGSQ) annual banquet. Chairman Gary Cooper, joined by the program’s Chief Sponsor, Madeline Tenney, made the presentation in the prison’s Protestant Chapel.

“Growing up, I lived off Toys for Tots, so it feels good to give back.” Ramon said to the crowd of about 50 inmates and a dozen outside guests. “Coming in here and having a banquet with incarcerated veterans is about keeping up the military tradition.”

Ninety-seven percent of the money goes for toys. Three percent goes to logistics. 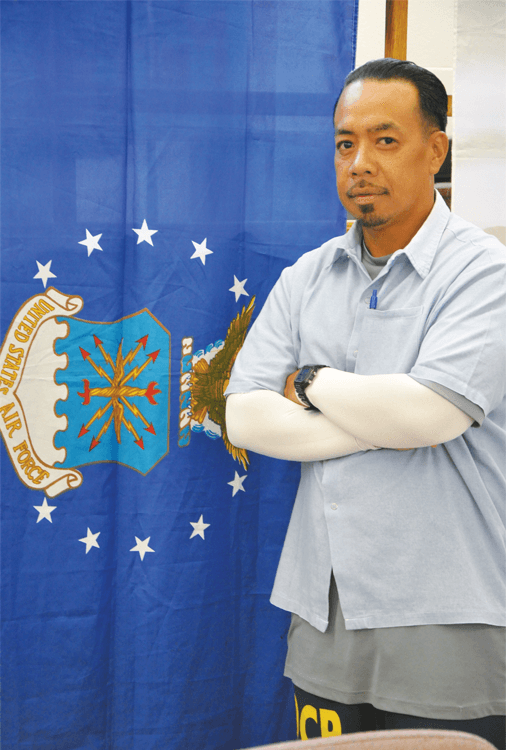 “The brotherhood and sisterhood of vets never dies. This kind of camaraderie keeps you strong”

Tony Burch, a soaring a cappella tenor, sang the national anthem. Tenney, a soprano, joined Burch in harmony. The incarcerated veterans stood at attention, saluting the flag, while some joined in song.

“This day represents camaraderie,” Cooper said. “Since I’ve been chairman, this is the first banquet in three years,” he added, “We used to have a scholarship program for high school kids that would raise about $12,000 each time we did a fundraiser. I hope to bring that back one day.”

The outside guests and incarcerated veterans were seated at decorated tables to eat a meal of baked chicken, barbecue meatballs, corn, potato salad, macaroni and cheese, with chocolate cake and apple crisp for dessert.

A prayer by Chaplain Mardi Jackson blessed the food and thanked the military men and women for their service to America.

Seven flags, representing each service branch, were displayed. The incarcerated veterans, most well over 60 years of age, fought in various battles and conflicts, from Korea to the current wars in the Middle East. Several took to the stage to read personal accounts of what it meant to serve in the military.

Several individuals were given certificates of appreciation for their extraordinary work for VGSQ.

Cooper called Kate O’Hare-Palmer, Army Nurse Corps, who served in Vietnam in 1968-69, honoring her contribution to the country.

“I’m very humbled,” O’Hare-Palmer said. “The brotherhood and sisterhood of vets never dies. This kind of camaraderie keeps you strong.”

O’Hare-Palmer continues serving the country as the National Women’s Chair of Vietnam Veterans of America.

“The veterans group has kept me grounded. It keeps me from developing that prison mentality,” Samuel L. Gaskins, 65, said. “It keeps me connected to the military community, which is positive.

“I’m feeling great, being around veterans. There’s a feeling of camaraderie, particularly for guys who’ve been in combat. You can always tell combat vets.”

Gaskins has been at San Quentin since 2011. He’s scheduled to be released from prison in 2019. 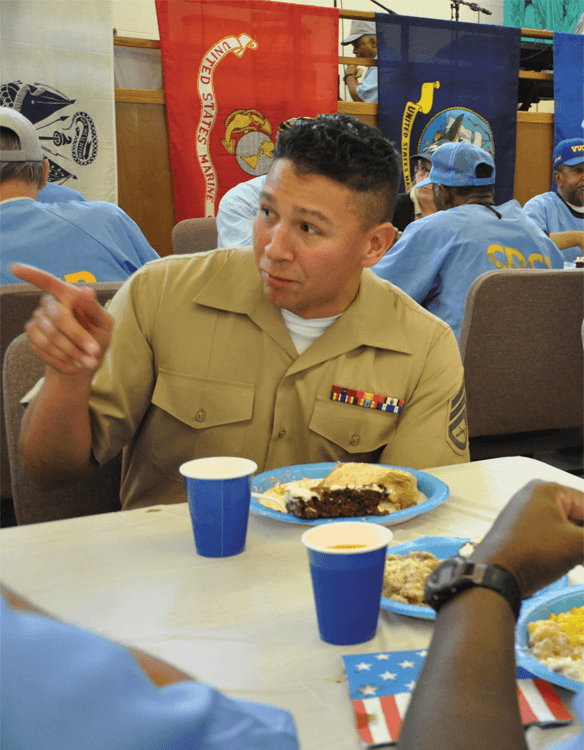 Reminding the incarcerated veterans, Staff Sgt. Ramon said, “I understand that life creates different circumstances, but you have your brothers and sisters out there supporting you.”