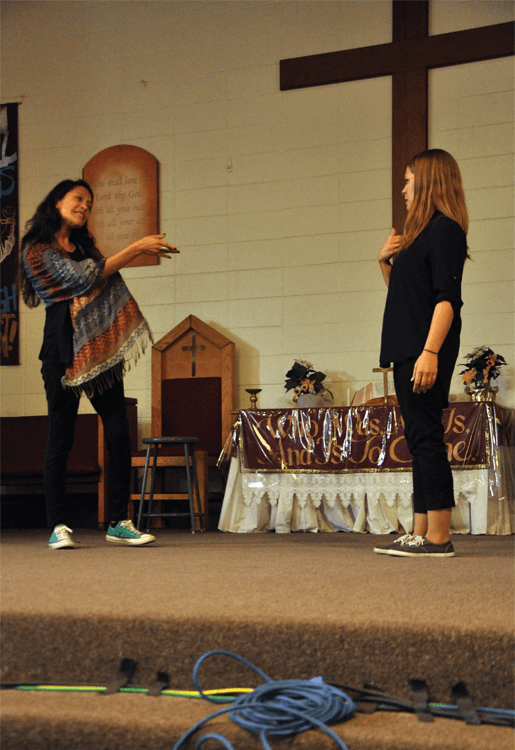 The warm humor of inmate Eric Durr began a Shakespeare-inspired explosion of 18 original performances using a full assortment of stage-craft — from pantomime to prose — to release a range of emotions, especially the experience of loss and letting it go.

An audience of more than 300 outside guests plus inmates filled the Protestant Chapel for two performances by an ensemble of prisoners and Marin Shakespeare Company members as they performed 18 one-act skits in “Parallel Play: Original Theater Inspired by Shakespeare.”

“The men today are acting like men. It takes tremendous courage to stand up here,” producer Lesley Currier said of the performers.

Earlier at San Quentin, Currier had produced and Suraya Keating directed the productions Measure For Measure on May 12 and Richard II on May 19.

Keating summarized the two original plays by Shakespeare, saying “The key themes of power – its application from power over, power within and ultimately power that we share with others.”

The original skits used the theme of power found in the men’s memories and imaginations as a means of inspiration and therapy.

The audiences responded to the multitude of acts with expressions of laughter, cries, sighs, gasps of amazement and applause. This attention and acknowledgement boosted the performers to heights of showmanship with costumes, props, music, voice, drum and dance all on display.

In one of the 18 skits, Angel Falcone used a conversation with God to time-travel, admit past mistakes and show what he had learned. As a serenade for his wife, he sang “Starting Over,” a tribute of a husband to his wife about “What could have been” instead of the betrayal that was.

Eddy DeWeaver expressed how freeing his mind and the power of words helped him share his feelings on the Freedomline Bus. He described a new way to share the emotions and the pain that so many cannot articulate.

In one creative skit, Ray Ray used a single phrase “I LOVE YOU” – “I LOVE YOU TOO” over and over. The seemly never-ending variety of ways this phrase was used and its range of meanings thrilled the audience.

“The men today are acting like men. It takes tremendous courage to    stand up here”

Then LeMar “Maverick” Harrison explained the raw force of a simple blindfold – “do you see me? What you see as tragedy, we see as reality.” Harrison’s prose, styled after Shakespeare, expressed the fears and the traps of the “misleading macho male mind.”

The tragedy of the street life was explored and the ever-present burden of death—of babies, brothers, mothers and grandmothers, by drive-by, neglect and simply worn out by age.

The skits sought to unleash raw emotions for the audience. The actors inhabiting another character allowed them and everyone watching to explore different facets of our emotional range—from a Black man’s hilarious parody of a White cracker to that of a mother’s pain: “My baby’s dead because of you!”

Ronell “Rauch” Draper exemplified the source of Shakespeare’s enduring legacy “Our faults give us the best pathway to transformation. The only way to change the world is together.”

“Don’t let anyone take away your rhythm,” Robert “Belize”  Villafranco shouted as he used drum and dance contrasted with silence and stillness and showed how reggae and true roots allowed him to realize “I’m not a gangster as I got my drum and rhythm back.”

The loudest ovation was for the opportunity to challenge authority in Dear Mr. President, which asked, “What would you say to Trump if you spoke with him?”

The most educational was “How I Got Cast in Marin Shakespeare”, a skit that demonstrated the process of performance. It takes both fear and courage to perform, from rehearsing, memorization and accepting support from the cast and crew. This proud new actor demonstrated the ability to share feelings with action and come out of his shell and be an actor. 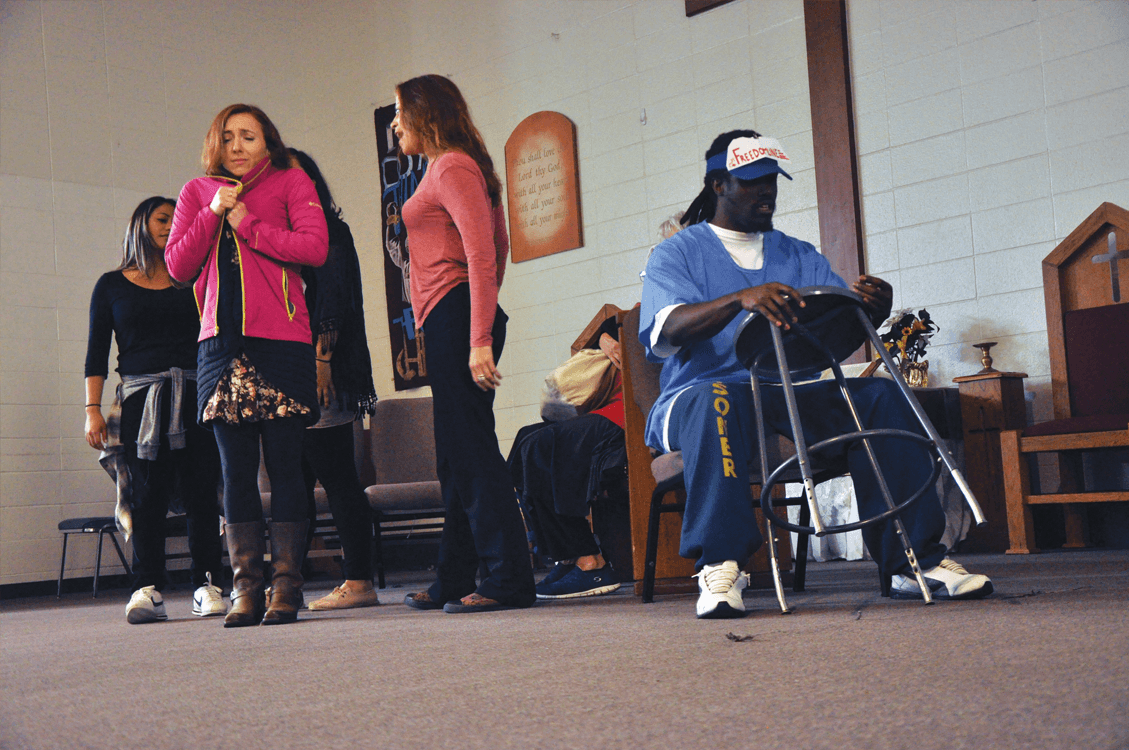 Darwin “Tall” Billingsley said he gained “confidence in my ability to take on the role of acting.”

The identification of the cast as “my other family” by numerous performers was a reminder of the power of live theater to create community.

In the Q&A that followed the performances, one guest visiting from New Zealand asked about the interaction between the inmates in a time of racial tension and the relevance of Shakespeare. The responses consistently affirmed that we face the same issues today as were faced in Shakespeare’s time and how the performances added another layer of humanity beyond teamwork by sharing the stage with a live audience.

The professionals of the Marin Shakespeare Company, which has sponsored Shakespeare at San Quentin since 2003, coordinated the performances. This organization has taken its San Quentin-learned process on the road and currently has programs launched or planned at eight California prisons.

If you’d like to participate or donate to this program, contact lesley@marinshakespeare.org or Marin Shakespeare Company; P.O. Box 4053; San Rafael, CA 94913.

Thanks in part to the California Arts Council; individuals can see videos of past SQ performances at www.marinshakespeare.org