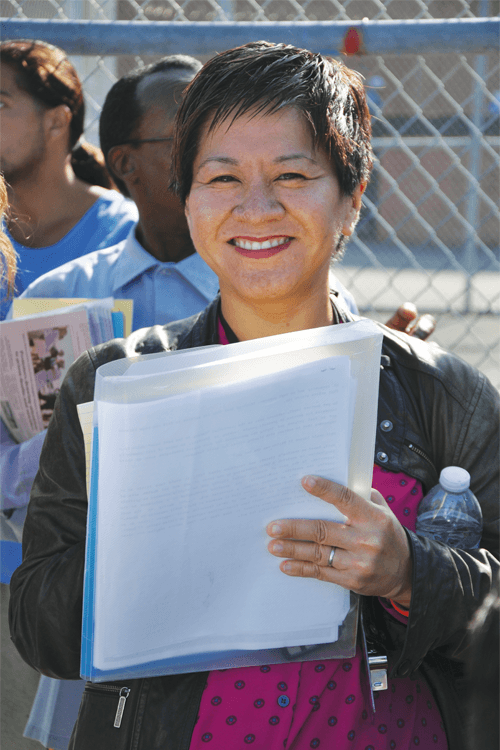 Author and lecturer Yukari Kane has become San Quentin’s new Journalism Guild instructor. She was sitting at her desk inside the San Francisco Grotto, an office space leased by about 150 professional writers, poets and novelist, when she received an email that invited her to teach at the prison.

“I thought, ‘Why not?’ I had flexibility with my time,” Kane said. “I was at a place where you take opportunities which open up your world, and see where it takes you.”

Kane has settled in for the last several months as the Guild’s instructor, replacing longtime instructor John C. Eagan. She is training the next generation of writers for the San Quentin News, and she has learned a lot about working with prisoners as journalists.

“Society does fear ex-cons and those in prison,” Kane said. “But writing can help them transcend that. That’s what makes journalism so important here; the stakes are much higher. It’s much more meaningful for the guys.

“It’s their way to make a difference,” Kane added.

“Yukari’s excitement for journalism is contagious,” said Jesse Vasquez, a San Quentin News staff writer. “She presents journalism like making a scrapbook. Every sentence matters and adds to the story.”

Kane has been a correspondent in Tokyo. She started her career at Reuters and U.S. News and ˆShe currently teaches at the University of California at Berkeley Graduate School of Journalism.

Her book, Haunted Empire: Apple After Steve Jobs, was published in 2014. She wrote for The Wall Street Journal, covering Apple during the last years of Jobs’ time in power. She broke many stories, including the news about the Apple chief’s liver transplant.

Journalism Guild writers are receiving some of the same training in writing and reporting as the students she teaches at U.C. Berkeley.

“The class has opened my eyes in ways I didn’t think it would,” said Amir Shabazz, a Guild writer. “I had a biased opinion about journalists; I thought they were full of it, but Yukari shows you how journalists are supposed to do their jobs. It’s about fairness.”

Kane is helping inmates deliver professional stories from behind prison walls. Guild writers, along with San Quentin News staff, cover issues of criminal justice and rehabilitation, in addition to the goings-on inside the prison itself. Kane teaches lede writing, attribution and the use of quotes and interviewing techniques. She gives the writers real-life training by sending them out into the prison to find stories.

“I see everybody as a journalist, no matter what crime they have committed,” Kane said. “They have a fresh slate as a writer, and I’m giving them the tools that matter — not just to repeat or repackage information, but putting their own voices into the stories.”

One concept Kane teaches is that writing is a way to reinvent who you are.

“Words and writing are empowering,” Kane concluded. “This situation in prison can seem helpless. Many come from a disadvantaged background and maybe with their writing will come changes, and they don’t feel helpless.”