In a close match, the San Quentin Hardtimers beat the Prison Sports Ministry softball team in a nine-inning game, 25- 22.
The last time Prison Sports Ministry (PSM) players tested their faith on the San Quentin softball field, they came up short. The Hardtimers won by a large margin.
PSM right fielder Bryce cleared his August schedule so he could come get revenge. In this rematch, faith in a new strategy brought them closer to a victory.
Catcher David A. and center Dan of PSM both believed that they knew what to do to improve their chance for this game.
“If we’re more patient, try not to walk players and not swing at the first pitch, we might beat these guys,” David A. said.
The PSM defense gave them hope.
Through whirlwinds of dust and changing wind patterns, PSM left fielder Paul robbed Hardtimers center fielder Kennith Lewis of a double with a spectacular catch of a fly ball, despite the conditions. Then he gunned out Hardtimer R.J. Hill at second, which ended the third inning.
Hardtimers led PSM 10-8.
By the seventh inning, Bryce’s hopes were high. Teammate Jeff loaded the bases with two runs batted in. Danny A. also brought in two runs, and Bryce tagged up on third, then ran home, which gave PSM the lead for the first time of the game at 17-15.
Left-handed batters took advantage of the Hardtimers’ right field with double and single shots for RBIs. Third baseman Brandon smacked the ball over the fence for a homerun to increase the lead to 22-15 in the top of the eighth. The PSM bench erupted in excitement.
“I have been trying to get an over-the-fence homerun since the last time we played here,” Brandon said.
Hardtimers coach Doug rallied his team with some encouraging words that inspired them not to give up.
In the ninth inning, the Hardtimers came back. With the bases loaded, newcomer Hardtimer third baseman Juan Navarro hit a fastball over the fence that nearly knocked on the annex education building door. That tied the game 22–all at the bottom of the ninth.
With two runners on base, Helder Alvernaz secured the victory with a line drive past the shortstop that brought in the winning runs.
“I love how the outside people come in,” Alvernaz. “It’s not all about winning. Them coming in helps me keep a positive outlook behind these walls.”
New Hardtimer Juan Navarro appreciates how they call him by his name. He says it makes him feel like a human being instead of an inmate. He says he loves that all races come together and play the game, and how the outside people bring their freedom inside to him. Both men believe that being able to play the game will keep them out of trouble. 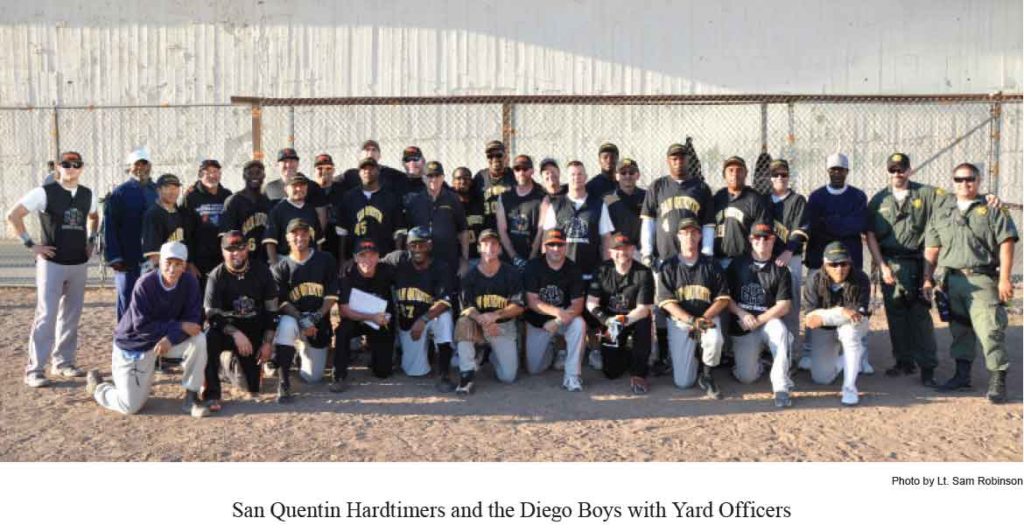 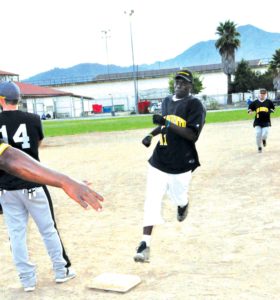 After 22 years Antoine Brown is a free man