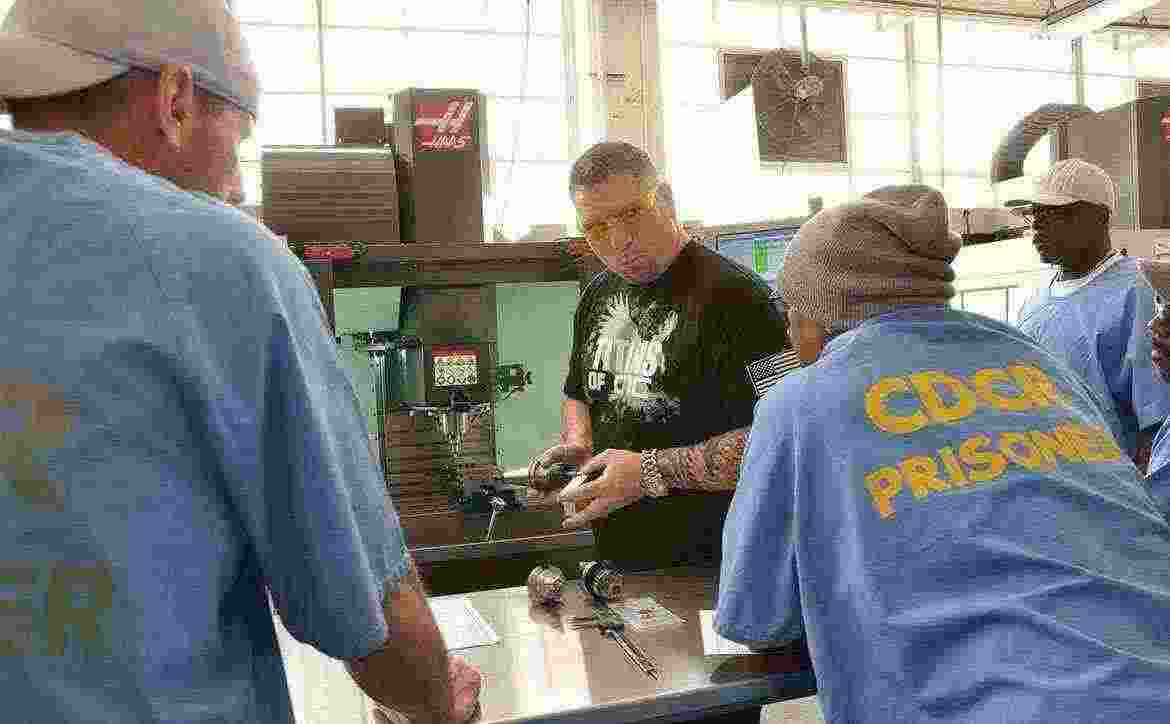 Titan Gilroy demonstrating to students how an edge finder works

In spite of the negative stigma of a felony conviction, new policies developed by local, state and federal officials will encourage employers to hire the formerly incarcerated, according to a Rand Corporation report.

Policies such as “Ban the Box,” certificates of rehabilitation, the federal Work Opportunity Tax Credit (WOTC) and Department of Labor Reintegration of Ex-Offender grants, even with  limitations, improve the chances of the formerly incarcerated for employment, the Rand study found.

“To inform policies and programs aimed at improving employment rates for ex-offenders, we conducted experiments to examine employer preferences regarding policy options targeted to incentivizing the employment of individuals with felony criminal records,” Rand stated.

According to the Rand study, there are several theories that attempt to explain the “consistent negative relationship” between the formerly incarcerated and employers, which results in poor labor market success for many of those with criminal records.

“Employers’ primary concerns are violent convictions and low skills,” according to the Rand study.

Having a criminal record is associated with low productivity and reliability, it was reported. This, according to Rand, explains why ex-offenders receive fewer job offers and earn less money.

“There are two sets of economic discrimination theories to explain why firms choose not to hire ex-offenders even when they possess the necessary skills for a job,” Rand reported. First, “employers worry that their clients or employees associate ex-offender status with being a high-risk worker.” Second, “employers cannot be certain about the productivity levels of prospective workers.”

The Rand study focused on policies designed to ease employer concerns by offsetting “actual or perceived costs of employing an ex-offender.” For example, in 1996 the federal tax code made available a credit to for-profit companies that employ groups that face certain barriers to entry in the job market, including “ex-felons.”

Another way to increase employment opportunities for ex-felons is the “Ban the Box” (BTB) policy that limits the use of an applicant’s criminal history by employers when making hiring decisions.

“By delaying employers’ ability to use a job applicant’s criminal history as a signal of low employability, BTB policies aim to encourage ex-offenders to apply for positions,” Rand reported.

Because an ex-offender’s loss of driving privilege can negatively affect an employer’s decision to hire them, some employment and training programs for ex-offenders include a transportation component, the Rand study says, adding also that “auto ownership has been shown to increase employment rates.”

Rand chose a tax credit and a private staffing agency to test employers’ preferences within its experimental hiring design.

“While the policy features studied in the experiments are largely hypothetical, they are based on the federal WOTC; local and state BTB laws; services of probation, parole, and re-entry programs; and services of employment or staffing agencies,” the study stated.

Some results from the study indicate that employers that used the baseline staffing agency would forward a candidate with the necessary skills and a nonviolent felony conviction to the next round of recruitment 42.9 percent of the time.

It was reported that seven out of 10 employers “would consider hiring a candidate if, in addition to the baseline package, there was also a guaranteed replacement worker program (65.6 percent) or a certified work performance history.”

Other results show that if an ex-felon job candidate with the required skills and a nonviolent felony conviction was supported by a tax credit, about six out of 10 employers would forward the candidate on to the next level of recruitment.

Lastly, “approximately five to six out of 10 employers said they would forward the candidate on to the next recruitment round if they had secure, consistent transportation,” Rand reported, adding finally that  “the candidate with validated work performance is 24.4 percent more likely to be considered for a job than the other candidate.”