The passions, struggles and rehabilitative power of San Quentin’s baseball program were captured during a week of videoing by a film production team of two future football Hall of Famers.

“Everyone I have met has been friendly. You can see the humanity,” said Mike Gattanella, film producer for The Religion of Sports. The executive producers are New England Patriots quarterback Tom Brady and retired New York Giant and television personality Michael Strahan.

The crew filmed the real heart of the program when the SQ A’s took on the visiting San Francisco Expos for “Paul Baker Day,” where inmate players and the Baker family, accompanied by Warden Ron Davis, honored the memory of Associate Warden Baker, who passed June 20.

“The baseball program is something Paul has always been proud of,” Davis said. “It’s a place for inmates to play team sports, and it shows the department’s commitment to rehabilitation.”

Monica Baker, Paul Baker’s widow walked slowly to the pitcher’s mound to receive two notes of appreciation signed by all the SQ A’s and Giants players and sponsors.

“This game wasn’t orchestrated by the administration. It was put together by the men on the field,” PIO, Lt. Sam Robinson said. “From the day we lost Paul, they wanted the friends and family to know that their loss was our loss.”

Chairman of the Veterans Group of San Quentin presented Mrs. Baker the three-corner folded American flag. She then threw out the first pitch. 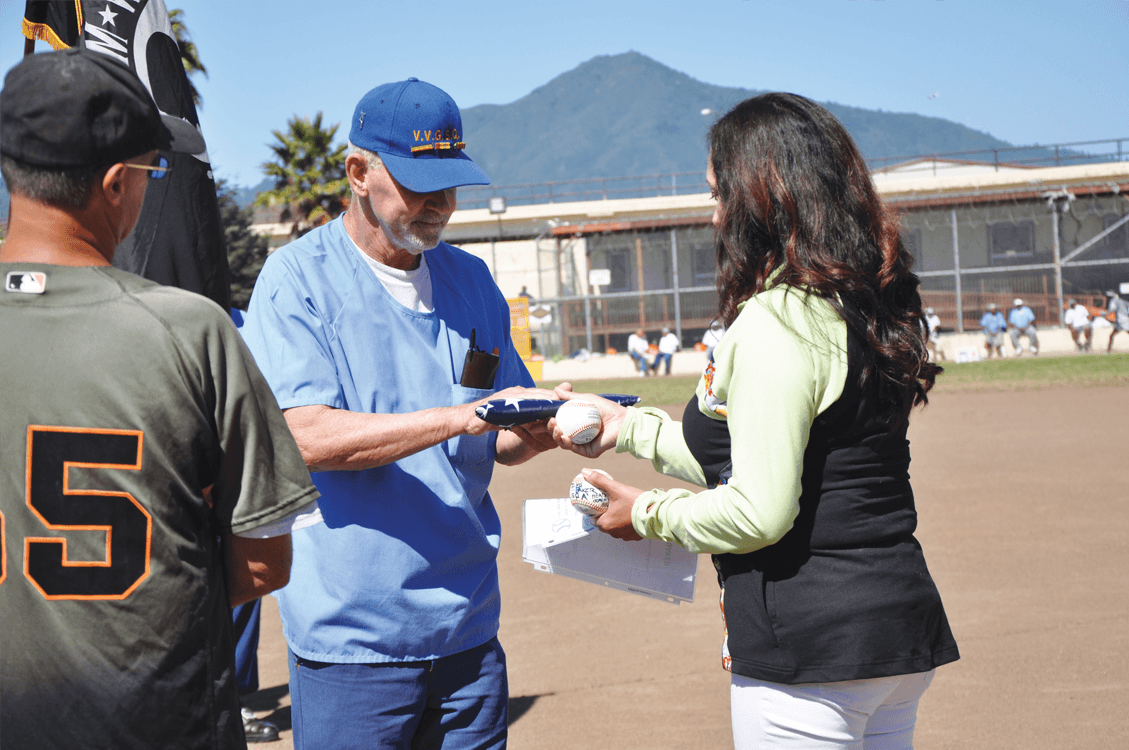 “It really touch me when he passed,” said John “Yah Yah” Parratt, SQ A’s inmate coach. “You could tell that he really cared about what was going on in the prison, because no matter who he was walking with he would stop to talk and listen to us.”

“He would always ask about the baseball program and took our requests up to the administration like balls, bats or what equipment we needed,” continued Parratt.

The A’s used the energy of the day to start the game strong by making all the right defensive and offensives plays, but too many mental errors in the late innings allowed the Expos to put on a batting clinic to seal the victory 8-3.

“We still have to work on the mental parts of the game,” said Elliot Smith, the baseball program sponsor. “We didn’t make the right throws defensively, and we weren’t sharp base-running either. To recognize Paul Baker was an excellent idea. He was a true friend to the program, and he will be missed.

“As for the filming, it’s good if it gets publicity for the program, but if they try to sensationize the inmates, then it is not worth it. But, I think it will turn out fine.”

“The baseball program is something Paul has always been proud of”

The lives of the A’s players Brendan Terrell and John Windham will be elements of the production. The men were filmed in their cells and rehabilitation programs. The movie crew sat in on a session with Terrell in Criminal and Gang Anonymous, 12 Step to Recovery. Windham shared his transformation having been in the baseball program longer.

“This is our form of freedom. We get to re-live our childhood through the program,” said Windham. It’s a blessing; we build friendships with people who we would not normally talk to. We don’t have a team. We have a brotherhood, and we win or lose together.”

Nick Tannura, Expos head coach, who has been bringing his team in for three years, concluded, “This program is a testament to the love of the sport of baseball and rehabilitation. What I hear is those who have participated in the program have a low recidivism rate after they’re paroled, so clearly it’s helping.”

The Religion of Sports will be a six-part series for Direct TV. The baseball program will be featured last in the cycle that includes rock-climbing and fishing.