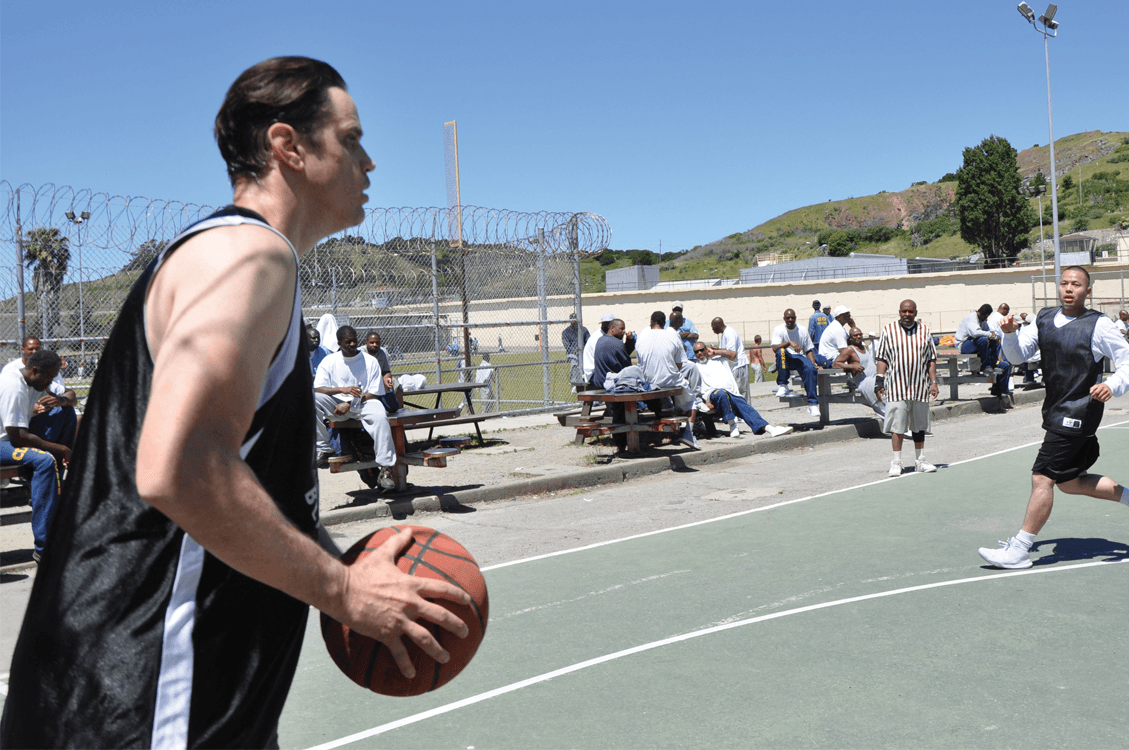 The San Quentin Kings, Age 40-and-Over basketball team won, 87-85 in overtime, after they withstood the visiting Bittermen’s surging comeback from down 15 points. Oris “Pep” Williams led the Kings with 32 points and 16 rebounds.

“Too many turnovers; you can’t beat a team like that with turnovers,” said Bittermen Geoffrey “Free” Gary, who coaches varsity basketball for the Drew School in San Francisco. “They have knockdown shooters. We did come back from 15 though.”

The game started out close, but the Kings dominated the second and third quarters.

New King Thomas “T-Top” Hamilton put his team up 46-31 by nailing a trey at buzzer, ending the second quarter with a 15-point lead.

Both teams huddled around half-court during half-time for an inspirational talk.

King Aubra-Lamont “Coocoo” McNeely announced that after serving 31 years in prison, a parole board found him suitable for release. If the governor doesn’t contest his parole grant, the Kings will have to find someone else to act as their 3-point specialist.

“I hope the next time I see ya’ll, it will be at a gas station or something,” McNeely told the Bittermen at halftime. He finished with six points off the bench.

Gary, coming from a just-visiting perspective, remarked that, “This is my third time coming here, and I really look forward to being here.”

The third quarter ended with the Kings still up 15, at 66-51, but the Bittermen surged in the fourth.

Gary scored eight straight points, making two treys and a layup. Then teammate Steven Lamb added a deuce, which made the score 65-68.

Williams responded with a floater, keeping the distance, but the Bittermen wouldn’t go away.

Gary hit another three to give the Bittermen its first lead of the game at 71-70 with 5:33 left in regulation.

King Damon “LA” Cooke made his first shot of the game to give the Kings a 72-71 edge. Teammate Joshua “JB” Burton followed with a three-pointer and Williams added two more points from the free-throw line, to make the score Kings 78-72.

Gary scored while getting fouled and completed the “and-one” play followed by Lamb with another deuce, to bring the Bittermen within one at 78-77 with one minute to go.

With 35 seconds on the clock, Bittermen Robert Mailer Anderson, author of Boonville and The Death of Teddy Ballgame, had a chance to put his team ahead from the free-throw line with the score 81-80. He made one free-throw but missed the next.

The Kings had a little help from Hamisi Spears, a fan who wore a crown made of paper with “Kings” written across the front. He heckled the opposing team’s free-throw shooters with the flair of a court jester, jumping around, rolling his eyes, sticking out his tongue and yelling, “Over here.”

Spears tried out for the Kings and didn’t make the team. He appointed himself mascot and found a proactive way to support the team, said King Head Coach Orlando Harris.

The Bittermen made eight out of 19 free-throws.

“The heckler was the MVP,” Bittermen Center Damien Cosby said.

Anderson added, “I blame gin and Al-Pastor tacos – I thought that was a good training diet.”

No one scored in the final seconds as turnovers cost both teams and sent the game into overtime.

In the OT, the Kings jumped ahead 87-83 but three turnovers in a row, two by Burton and a backcourt violation by Williams, gave the Bittermen a chance to catch up.

With six seconds left and down by three, Bittermen Greg Tang, who had already scored 28 points, took a shot from behind the three-point arc, but missed. The ball ended up in Lamb’s hands, and he shot and missed, which left the Kings up by two points as the time ran out.

Burton scored 25 points for the Kings.

“It was a competitive game,” Burton said. “Both teams played hard. It didn’t close out too good, but it was a high-intensity team effort. We faced adversity and pulled through it.”