More than two dozen survivors of crime crossed the heavily riveted steel doors at San Quentin to face prisoners convicted of serious crimes, including murder. One of the key conclusions was that a healing dialogue is needed to improve communication between survivors and perpetrators.

The event was held Oct. 27-28 in the Protestant Chapel. Participants included prisoners, crime victims and families of victims, prosecutors and criminal justice organizations.

Dina Phillips has experienced the effects on both sides of crime. 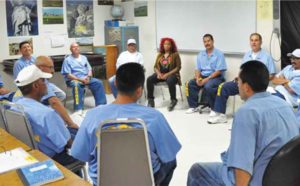 “Over 22 years ago my world was shaken — not that there was any stability before, but this was far worse. I lost my niece when she was only 2 months old and my 16-year-old brother was sent to prison,” Phillips said.

“I chose to hold on to my feelings and avoided any talk about that part of my life. That was a very sensitive and broken part of my heart and soul that I did not allow anyone to see due to the fear of being criticized.”

For about two years Phillips shut everyone out of her life, because she believed no one would understand her pain, until she got in contact with the director of Healing Dialogue and Action.

“Never in a million years would I imagine that there were so many people out there who cared to hear my story without judgment,” Phillips said. “Healing Dialogue and Action, Human Rights Watch, ARC (Anti-Recidivism Collation), Restore Justice and all the men from San Quentin, you are all part of my healing journey.”

It wasn’t the first time inside San Quentin for Noelle Swan Gilbert. She’d been to the event in 2016.

Although Gilbert knew the prisoners were nervous, she felt confident because the men “(had) been doing the hard work of working in themselves while doing time.”

Gilbert knew most of them were also survivors of crimes.

“They are brave men to confront their pasts and to accept responsibility for their crimes,” Gilbert said. “It’s more than most people outside prison have the courage to do.”

With teary eyes, Anouthinh Pangthong told the room of nearly 150 people, “I am grateful to San Quentin State Prison’s administration for all the self-help programming it offers, because these programs helped me do the introspective work about my childhood to connect the dots as to how and why I once was so destructive, causing an innocent person’s life to be lost to street gang violence.”

Pangthong acknowledged that he cannot change the harm he caused, but “I can change how I respond today by being of service to my community,” adding, “This is why I am here today as my promise to you and those I hurt that I will spend the rest of my life promoting non-violence.”

Pangthong paused to contain his emotions and ended by sharing that after 21 years behind bars, he was found suitable for parole.

Next, all of the symposium participants formed seven small circle groups.

The circles provided space for each person to talk about or listen to the heart-wrenching stories about what it’s like to be an offender or survivor of crime.

A survivor said, “Throughout the process since the murder of my daughter and granddaughter, my family and I were never asked about our needs. I felt unsupported and utilized by the prosecution office. We longed for emotional support. Instead we felt pressured to secure the longest conviction possible against the person who killed my loved ones, as if this was going to help my family and me find the peace we so desperately needed.

“So my wife and I took this healing dialogue symposium opportunity to see what this process had to offer us to continue finding closure in our lives.”

To paint a picture of their dearly departed, the survivors shared the personalities of those loved ones they’ve lost to violence. They talked about loving their loved ones, their goals in life and their favorite thing to do during family gatherings.

Survivor Nora Agredano later revealed, “As I sat down with the wonderful men from San Quentin and told my story, they listened with intensity, and they were very concerned with my well-being. They took the time to make sure I was OK for the rest of the day.

“I listened to each man’s story and what brought them to this place with intensity. I listen (to) how far each of the men has come to reach a place where they see what damage they had done and their desire to give back to society. Each man has worked so hard to achieve the wonderful man they now have become. I am so proud to call them my friends.”

Despite the fact that survivors and inmates were complete strangers, the inmates poured out their raw emotions without restrains.

“I never met my father, and my mother left me for her boyfriend when I was 4 years old, leaving me behind with my grandparents. I haven’t seen her since,” Gonzalez said. “At 14 years old my grandparents sent me away to live with relatives here in the U.S, where I was never sent to school.

“Growing up I witnessed my grandfather and uncles drink alcohol to mask their feelings and emotions. I followed their steps and embraced their belief system that men control alcohol-use and not the other way around.”

Mariah Lucas later reflected by saying, “I feel like as victims and survivors we are oftentimes set aside when it comes to the criminal justice system – our cares, our needs, and our voices don’t matter to anyone. However, going into the prison and sharing my experiences with other victims and with men who have created victimization and being able to come to a mutual conclusion that we need more action, I felt validated and heard.”

Lucas added, “During the symposium we also came to a mutual agreement that we need a path that we can travel together to remove the block that society has put on the victim-offender relationship so that we can come together and create a more unified journey of healing, and we can destroy the current belief that these sides should stay away from each other.

“Moving forward we cannot look at people as criminals and as victims. We need to look at them as healers, people who want to work together to create a common peace, one we all long for, one we all dream for. At the San Quentin symposium, we were given that opportunity to make those dreams a reality.”

Survivor Jody Ketcheside reflected on the event, “As homicide survivors, we are often asked to share our stories. Sometimes it’s in an effort to educate, sometimes to help legislators understand the challenges and wishes of survivors. Sometimes it’s to connect with the men inside, bringing understanding and healing for all of us, and sometimes it is to create positive change in a system that so desperately needs it.”

The next morning everybody embraced each other with kindness, empathy and loving care.

The best part of the day occurred when small groups reconvened after brainstorming how to best meet the survivors’ needs. A spokesperson was chosen from each small group to report about their suggestions. Astonishingly, the number one suggestion was to begin a healing dialogue —providing communication between the survivors and perpetrators.

Clare Senchyna reflected, “On the second day the inmates in my circle expressed that they hoped us survivors were OK after the day previous, as they feared our trauma might have been re-triggered. I told them how I was reflecting on driving to San Quentin that morning how much lighter I felt, that participating in the circle the day previous had given me that gift, that I know I have every right to feel hate and anger and rage at the person who killed my only child. But that in itself is such a heavy burden to bear, and by spending the previous day with them, that burden was lifted a bit.

“I participated in these circles to help me continue to live, to ease the demons that visited after my son was killed. It has been one of the most therapeutic ways to find peace. Who would have thought? To be in a circle with those who have committed homicide and those who have been on the receiving end, and at moments realizing we could all have been in each other’s shoes. We are all imperfect humans sharing our common humanity. We don’t have that opportunity  much in the everyday world.”

Ketcheside also reflected, “Out of that brainstorming session came ideas for helping incarcerated people access victim services, helping survivors access information to ease their concerns with regard to parole, and an opportunity for so many survivors to be able to talk about how most of us don’t want prisons that are run punitively and our concern with the justice process from the start of the court proceedings.

“In this healing dialogue I was able to express my feelings on how survivors are treated in court and how we are coached to hate the defendant and how unsettling that was for me while I was trying to make sense out of something so senseless. We can’t learn from each other if we are afraid of each other.”

Gilbert reflected, “I was incredibly moved by the conversations we had within my smaller circle. We established an almost immediate trust with one another, perhaps because of our shared experiences or maybe because of the way the day was scheduled. We were able to let our stories unfold in a natural, more organic way, rather than start with the crime. It allowed us to lead with the human side of our stories, which helps us get to know each other as people first.”

One of the survivors, whose son was murdered two years prior to the symposium event, commented that she was skeptical coming into San Quentin. Nonetheless, at the end of the first day, she had changed her mind, saying, “Before coming into this meeting I thought about inmates as being monsters. After hearing your stories, I was able to see your humanity and repentance for the crimes you’ve committed. I was able to feel your emotions which helped me change my perception about inmates.”

At the end of the first day, she shared her experience with one of her daughters who had advised her against coming into San Quentin.

“After I told my daughter about such a powerful experience I had, she was intrigued and would like to take part of this healing dialogue process next time the opportunity arises.”

Gilbert shared that the symposiums are an important step for the outsiders and public safety officials, “to understand that survivors and people who have committed a violent crime are connected by pain. Pain is pain. We need to acknowledge this to start healing and to be a better support system for survivors of violent crime. There is pain on both sides of a crime, and it reaches beyond the immediate families for years, and pain doesn’t end with a prison sentence.”

Suddenly, the survivors and convicted men merged as one in an epic hug with their eyes full of tears while the rest of the attendees witnessed in awe the power of healing in its full splendor.