Darnell “Moe” Washington has walked the path of restorative justice by confronting a fellow inmate who had assaulted his aunt, sending her to the hospital, in a drug-induced rage in 2015.

The person who attacked his aunt was transferred to San Quentin. Washington, relying on his Restorative Justice experience, approached the perpetrator and engaged him in a discussion of his crime. He was able to put the techniques into practice.

“Forgiving someone who committed an atrocious crime against your loved one is hard to do, but the offender will live in your head until you do,” Washington said in the 2016 San Quentin Restorative Justice Symposium.

Washington has worked as a Restorative Justice facilitator for more than four years at San Quentin.

Over the past few years, stories abound about powerful men ― from Harvey Weinstein, Charlie Rose to Matt Lauer ― who have abused their authority for sexual gratification. Women who reject and resist this unwanted pressure have launched the #metoo movement to provide a mechanism of protest.

Given the avalanche of accusations of sexual harassment/assault revealed by the #metoo movement, the San Quentin News decided to sit down with Washington and ask what Restorative Justice could add to the conversation.

Moe Washington: The restorative justice philosophy from THE Little BOOK of Restorative Justice, written by Barb Toews, provides a mechanism to bring the women healing and for men to take accountability for their actions.

SQN: What are the key elements of restorative justice you think apply to the problem of sexual harassment?

Key restorative justice elements focus on Harm and Accountability, Participation, and to Restore and Heal all involved. In the Little BOOK, a chapter talks about the offender, his family and community and also the victim, the victim’s family and community. So when the accusations about Charlie Rose and Matt Lauer came out, I thought this would be a perfect opportunity to practice restorative justice.

SQN: How would you recommend a sexual harassment claim be dealt with?

It is not about one individual. We need to consider the full range of the impact of these wrong acts. In the public eye, you have some of the most popular men in news reporting, their wives, children and community. Then you have their victims, their families and communities. Just imagine how the victim is feeling now? She is afraid to show her face because people may look at her as destroying someone’s career, or question whether she’s being truthful. 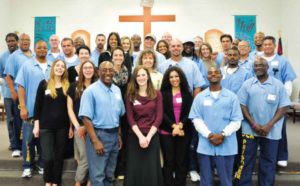 Alliance for CHANGE posing for a group photo

Then there’s the accused. How do his friends, who looked at him as a role model, and talked so highly of him, feel about him now? What about their families? How do the friends and family of the spouse consider her if she stays married? They have children who are in school, so you can only imagine the teasing and torment their children are going through from their classmates. Consider how a community looks at the accused now – would they even want him to be a part of their community anymore?

SQN: How would a Restorative Justice philosophy resolve this situation?

Who has been hurt?

What does she or he need?

Who should be involved in meeting those needs?

What is the best way to repair the harm and meet those needs?

SQN: Will Restorative Justice work with a power imbalance between the parties?

YES. This has worked with gang members, rape victims, people with family members murdered. We have seen it work between African Americans and Klan member, Hutus and Tutsis in Rwanda even where whole families in their hundreds of thousands have been murdered, raped and mutilated.

SQN: What is unique about this process?

If offenders like Charlie Rose and Matt Lauer would be willing to have a face-to-face dialogue with their accusers, giving the victims the opportunity to have their voices heard and to express how they felt violated, and the hurt and pain they have experienced. Then the accused could take accountability for their actions and at the same time explain why they felt empowered to do the things they did. Only then can society get to the root of the problem.

SQN: What is the biggest challenge to implementing Restorative Justice?

The challenge is creating an environment where both parties are willing to come together and meet face-to-face. Often, both the victim and the perpetrator are reluctant.

SQN: How would you respond to those that fear a restorative justice process would only absolve those in power of their guilt so as to enhance their reputation by “manning up” and listening to their victims?

I would say that by not coming forward and publically facing their accusers, they would not feel any guilt. The only way for them to feel the guilt and shame of what they did to their victims is to sit face-to-face with them. They women have held these feelings in for so long and been quite about what happened to them out of fear. I believe that experience will empower victims of power men by requiring these men to publically answer these questions.

This is even more important with powerful men that don’t regularly have to answer to anyone.

As a Restorative Justice Facilitator, I have heard so many victims/survivors say they have some many questions they wanted answered by the offender. After getting those answers, the survivors say they feel able to start on their healing journey. If we never get the answer of why and what lead these powerful men to do these things, how will we ever be able to repair the harm and meet the needs of these victims? How else can we make sure this type of crime doesn’t happen to others?

SQN: How would this bring healing to those impacted?

I believe this process would bring these survivors more healing because the accused will directly hear their voices as well as other men who have committed sexual harassment/assault. They could be an example for other men to come forward and take accountability for their actions, so these women could start on their healing journey.

Because right now the women make an accusation, the men are fired from their jobs and shamed or make an apology over twitter and that’s it.

SQN: What are the goals of the Restorative Justice Group?

This restorative justice approach would seek to restore and heal these women. We have to try something new. So let’s all work together to make this right, America, and not let this turn into another political fight.

If you’d like to contact the program, join or attend a future symposium, send an email to SQRestorativeJustice@mail.com