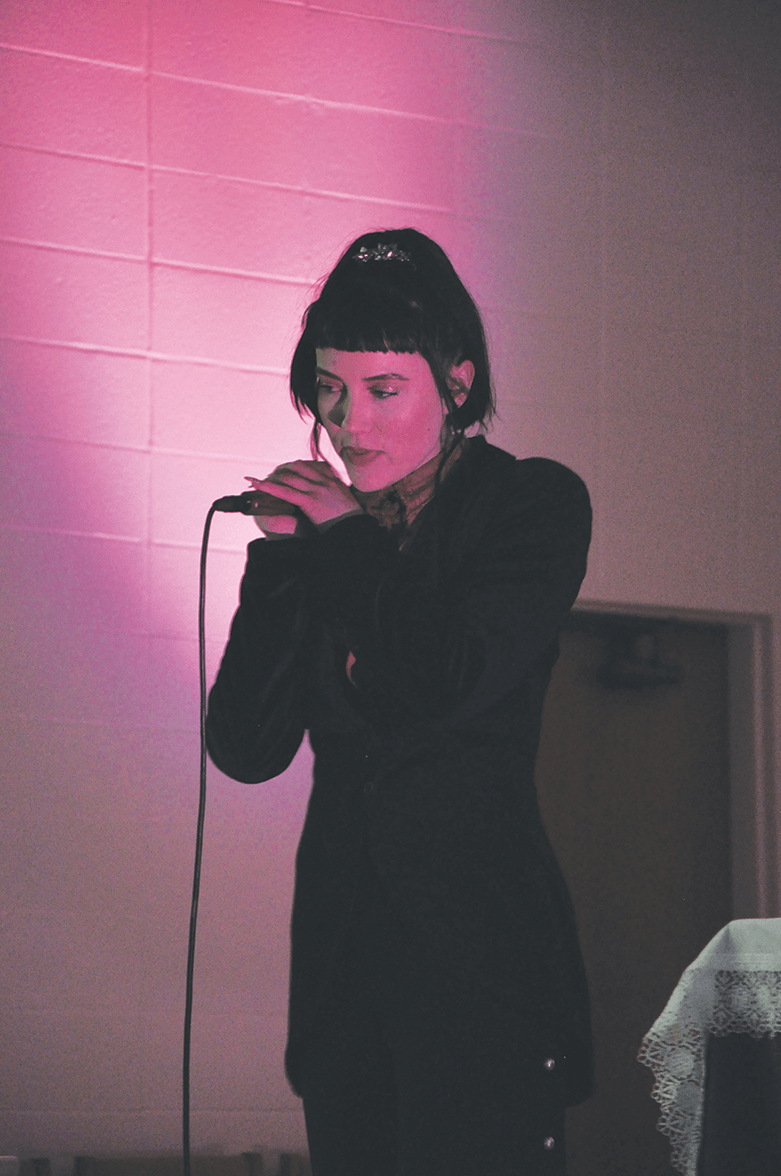 Dressed in black bell-bottom pants with buttons along the side and wearing a black blazer with a shiny brown blouse, King put on a look that, on its face, could have been interpreted as belonging to rock, goth, punk or the pop genre of music. It became obvious none of that was her once the music played and she started singing.

King’s song Run for the Hills opened the early evening performance with DJ Kraig (Frank Tyler) working his digital magic from a table on the side of the stage. He’s also called the “Liquid Giraffe.”

When King sang Angel of Paris, the sounds and drum beats roared from the Catholic chapel’s sound system, taking the music back to the familiar sounds of MTV 1980s fresh, innovative European artists such as the Human League, and Nena. The song “Bette Davis Eyes” by Kim Carnes comes to mind hearing Angel.

“It’s not at all what I expected,” said DJ Kraig, who used a laptop computer, multi-channel mixer, dual-deck CD player and drum machine to mix and arrange music and rhythmic beats for King.

This was his first time inside San Quentin. Coming in, he said he had no expectations because he came in “to provide a gift,” adding that he felt “fortunate” to come in and perform.

King said singer-actress Cher told her to say “hi” to the men at San Quentin. Cher is her mother-in-law. King is married to Cher’s son Elijah Almond, whose father is the late musician Greg Allman.

The audience of more than 120 inmates and outside guests related to King’s song “Perfect Day.” She said this is a true story about going along with your day when “s**t hits the fan.” It too brings about ’80s nostalgia.

“I grew up in a cult,” King said. The name of the cult was Children of God. “They had nothing to do with God.”

King said she grew up in the Soviet Union, “restricted” and not allowed to hear music. When she was a teenager, she decided to turn on the radio. The rest, as it is said, is history.

“Queeny is the name of my grandmother,” King said. Marie Angela is the name that she says appears on her passport. “Nobody calls me that.” King is her last name.

“Living a Lie” was another of King’s songs she performed. If readers remember hearing the ’80s song 99 Luftballoons by the group Nena, then this is that kind of music. King’s song introduced subtle guitar lines in the background mixed in by DJ Kraig.

Kraig said he’s been a DJ since he was a kid. “It was another way to make money.” He started mixing on old-school vinyl records and still knows how to use the pitch wheel on a turntable. He said in high school he bought a Roland 808 drum machine for its sound. These days, like many DJs, Kraig relies on digital technology.

“It’s a freak show, anything goes…It’s how the girls get down and how the boys romance.” The crowd really enjoyed the song “Freak Show” for its sound and lyrics. They clapped to the beat. King said the song is about a club she walked into in London. The scene she described was wild. One inmate asked for the name of the club.

“It’s really hard for me to sing this song,” King said during an interlude between songs. She said it was her father’s favorite song as she directed the crowd to sing along: “Carry me home, home, home…” The music had a low bass drone sound with strings in the background. King sang: “Standing at a crossroad, I want to find my way…Standing at a crossroad, I don’t want to be alone…”.

Following that arrangement, DJ Kraig manipulated King’s vocals on another song to sound like a chorus was behind her as he scratched turntable sounds. His choice of string rhythms was also reminiscent of music from the ’80s. 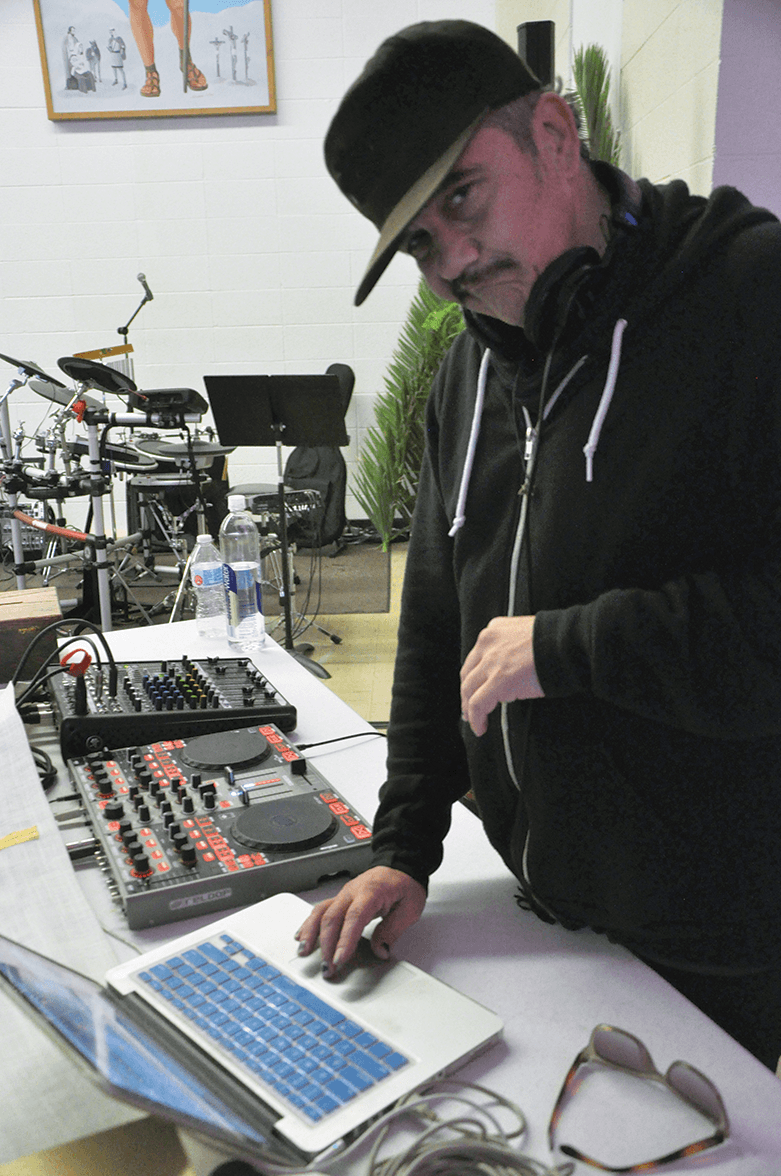 The crowd gave Queeny King and the Liquid Giraffe, DJ Kraig, a standing ovation. Kraig then sampled some of his other sounds for the audience during a question-and-answer discussion.

King said she decided to showcase her songs at San Quentin first—before presenting them to any record label. “I’m looking for someone to rap on a few tracks,” she said.

“I was thinking about the first place to sing after a hiatus,” King said. The inspiration for the duo to come to San Quentin, she said, was that “I had so much fun singing in prisons before.” She said these are some of the moments she used to share with her father, who passed away a short time ago.

One inmate who introduced himself as Robert thanked King for coming in to perform and sharing part of her life with the audience.

Inmate W. “Rico” Rogers, who plays keyboard in the prison’s R&B band, asked King if she could bring Cher to the prison. “I’m going to definitely try,” King said.

Another inmate shouted, “We believe in life after love,” referring to “Believe,” one of Cher’s songs from the ’90s.

“This is great,” said music producer Tom Lapinski, one of the outside guests. He used to bring musicians in to perform at San Quentin from 1977 to 1999. “I want to come in and do concerts again,” he said. “There hasn’t been a (big) concert since Metallica.” He also worked with the organization Bread & Roses from June 1977 to December 1980.

After some urging, encores of “Perfect Day” and “Freak Show” were performed. The men loved it as they sang “It’s a perfect day” in the chorus. DJ Kraig mixed it up using his desktop technology as the crowd sang “freak show, anything goes.” The familiarity of both songs made them come off stronger the second time around as a few inmates got up and danced in front of the stage.

When the performance finally ended, many of the men gathered around King for a chance to shake her hand, speak, pose for pictures and get her autograph on pieces of paper. For one evening in prison, it was a Perfect Day because nothing hit the fan in another Freak Show where sometimes anything goes.