Advocates and families of prisoners have held rallies to protest the deaths and suicides of their loved ones in California prisons and jails.

California’s state prisons recorded eight suicides in the first five months of the year. Also, earlier this year, four prisoners died in nine days at Twin Towers Correctional Facility in Los Angeles County Jail, sparking a clash between protesters and police that momentarily shut down part of a street leading to the main jail complex, according to the Los Angeles Times.

National attention was aimed at the suicide of ex-NFL star Aaron Hernandez in a Massachusetts jail.

The women’s institutions in the California Department of Corrections and Rehabilitation (CDCR) have taken the lead in implementing preventive measures to raise awareness.

“There are a lot of reasons that someone might consider killing themselves. Often it is because they have lost hope for themselves or something happened that throws them into a crisis,” wrote the California Coalition for Women Prisoners (CCWP), a statewide support organization, in a Suicide Prevention pamphlet.

“I am a suicide survivor who has battled depression for many years,” said Brinda McCoy, an inmate from CIW, reported in CCWP’s newsletter The Fire Inside. “Locking up inmates in isolation rooms and prescribing heavy doses of psych medication is both temporary and unproductive.

“I believe we need support groups to help us process our feelings of depression/suicide. Talking about the root causes and alternatives to medication must be considered,” added McCoy.

She described the stigma and despair of having to deal with being placed on suicide watch.

“I (could) never admit thoughts I have about giving up or wanting the pain to end. This only leads to handcuffs and humiliation as I am escorted across the yard in front of curious inmates wondering what I did wrong,” said McCoy.

The CCWP collaborated with prisoner Natalie DeMola, a peer health educator at Central California Women’s Facility (CCWF), to produce the pocket-sized pamphlet to deal with the suicide situations at the women’s prisons. 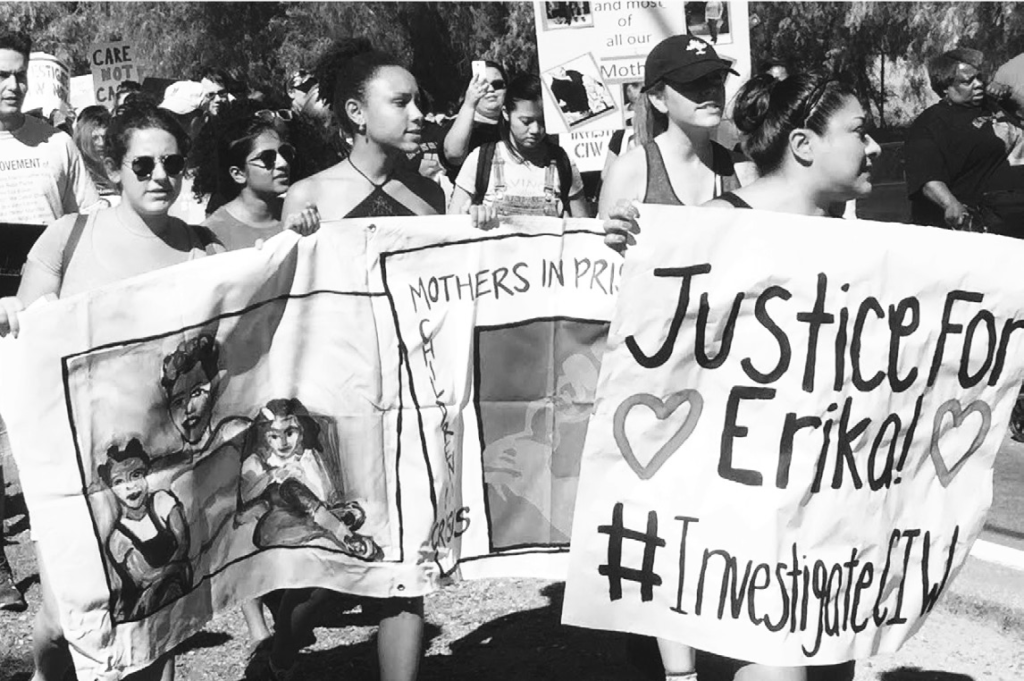 Protesters hold a vigil outside of state prison CIW

Women in CIW have seen 16 suicide attempts since January, even under a new warden, reported the CCWP on March 30.   “It may feel like ending their lives is the only way to stop the pain,” said the CCWP pamphlet. “In those moments you may feel like you’ve hit a dead end or will never see justice or feel joy again. Sometimes we need others to get us through those times.”

The pamphlet lays out things anyone can do if you feel like harming or killing themselves:

• Reach out to your family or friends and let them know how you are feeling.

• Seek advice from staff or religious leaders who you trust and feel can help you.

• Believe in yourself your worth and your ability to make changes. Try not to judge yourself or be ashamed of your feelings.

• Get help from a professional to work on some of what led to your attempt to hurt yourself and that supports you in getting closer to your goals.

Signs to look for:

• Talking or writing a lot about death

• Seeking access to something they could use to hurt themselves (i.e. pills, a knife or sharp object, a razor)

• Speak up if you are worried. Check in with the person instead of waiting for him or her to come to you. If there is a trusted staff member, share your concern.

• Remind them of the things they care about that make them happy.

• Remember: Many people that have thoughts of suicide feel isolated and misunderstood. If you think someone might attempt suicide, let him or her know they are not alone. If you have overcome suicidal thoughts, you can share that with them too.