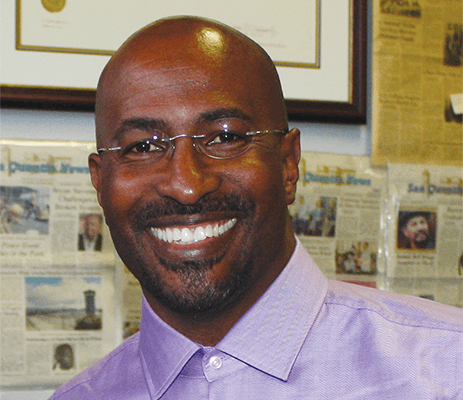 Van Jones – activist, educator and green economy builder – paid a return visit to San Quentin in September and offered words of wisdom. A former adviser at the White House, Jones returned here before starting at Princeton University as a Distinguished Visiting Fellow in both the Center for African American Studies and the Program of Science, Technology and Environmental Policy at the Woodrow Wilson School of Public and International Affairs.
At Princeton Jones will hold a one-year appointment for the 2010-11 academic year, teaching a course in the spring semester focused on environmental politics, emphasizing policies that create green economic opportunity for the disadvantaged.
Jones is a globally recognized pioneer in human rights and the clean energy economy. He was named one of the 100 most influential people in the world by Time magazine in 2009, and is the best-selling author of “Green Collar Economy: How One Solution Can Fix Our Two Biggest Problems,” which explores the social, economic and political implications of the creation of green jobs.
Jones was a primary advocate for the Green Jobs Act, which President George W. Bush signed into law in 2007, and served from March to September 2009 as the Obama administration’s special advisor for green jobs, enterprise and innovation at the White House Council on Environmental Quality. Jones helped shape the Obama administration’s policy for making America’s homes energy efficient. Then he was hounded from his job by right-wing commentators.
Jones is one of the most vivid and spirited speakers alive today. One key to his success has been his larger-than-life personality and his powerful way with words. He has found his niche in public speaking, using uproarious humor mixed with concrete solutions that link what are arguably the two most pressing problems for the United States and the world: climate change and economically under-served communities.

As Jones walked onto grounds of San Quentin for the third time he remarked,” You got me clear last time and now I’ve come back for some rejuvenation. I need some wisdom, I need knowledge. I’ve been through some stuff. It was bad but it gets better.”

He stopped, looked around and said, “I got a chance to be on the other side of the curtain. I’ve been to Oz and back again.”
Then Jones sat down in the Green Life circle and began to share his thoughts. “It’s not like in the old days; they use digital bullets now. You have to learn to put egos aside. You go from working with the guy, helping the guy, then things go boom,” Jones said. “Then you have to fall on the sword, you have to take one for the team.

“It took me awhile to get past the sadness, depression, the mourning and self-hatred. It’s like someone puts a bell on your head and hits it.

‘Best Thing I Did’

“Then you realize that you’re just a pawn in the game compared to what they’re trying to do to the President.
“The best thing I did, honestly, was to come here before going to the White House. Because I had a route. I knew I wasn’t there for myself. I was there for you guys, I was there for people who are really going through something. On Friday I left here, went home, did some work. Sunday I caught the red eye and reported to work to the White House Monday morning.
“When I was there, I was clear as a bell. I had an adventure. There were dragons that had to be confronted, inside and outside. And I’m not saying anything negative about anybody. But everybody is not there for the same reasons. You have a President, he’s there for the right reason.”
Jones said that as a Yale Law School graduate, “All the Bernie Madoffs, they went to school with me. I’m not fooled by the system. I know who the real criminals are. We’re all fighting for our humanity a lot of time. When all the illusion, delusion and pretense are done…you have to actually deal with yourself. That gives you authenticity and it makes you stronger.”

The Green Life program at San Quentin uses peer education, life stories and eco-literacy as tools for individual and community transformation.
According to program members, by awakening to our roots in earth and connection to each other, Green Life integrates practical life skills while fostering entrepreneurship and economic self-sufficiency. The goal is to build a global movement toward environmentally conscious living.
Jones said he considers himself to be an honorary member of San Quentin’s Green Life program. Other persons essential to the group’s success are Laura Bowman Salzsieder of San Quentin Community Resources, and Ted Roberts, Principal of the Education Department, plus those who teach the course in Social Psychology facilitated by the Patten University Prison Project, Karen Martin, Ph.D. Candidate in Public Policy at Stanford University, and Jennifer L. Eberhardt, Assistant Professor of Psychology, Stanford University
The following associates of Van Jones and facilitators of The Green Life also participated in the discussion: Pandora Thomas, Global Exchange, Director and Curriculum Manager for the Environmental Service Learning Initiative and eco-literacy instructor; Cynthia Ong, Executive Director, LEAP; Konda Mason, filmmaker, producer and Kripalu yoga teacher; James Hanusa, MBA, Thunderbird School of Global management; Ambessa Cantave, musician and activist; Aaron Ableman, musician and educator; AshEl Eldridge, artist, educator, organizer and spiritualist; Rose Elizondo, Angela Sevins and Joanne Connelly, facilitators of Green Life.
For more on Van Jones and Green Life, use the website, www.sanquentinnews.com, to access the issue of Sept/Oct/Nov 2009.