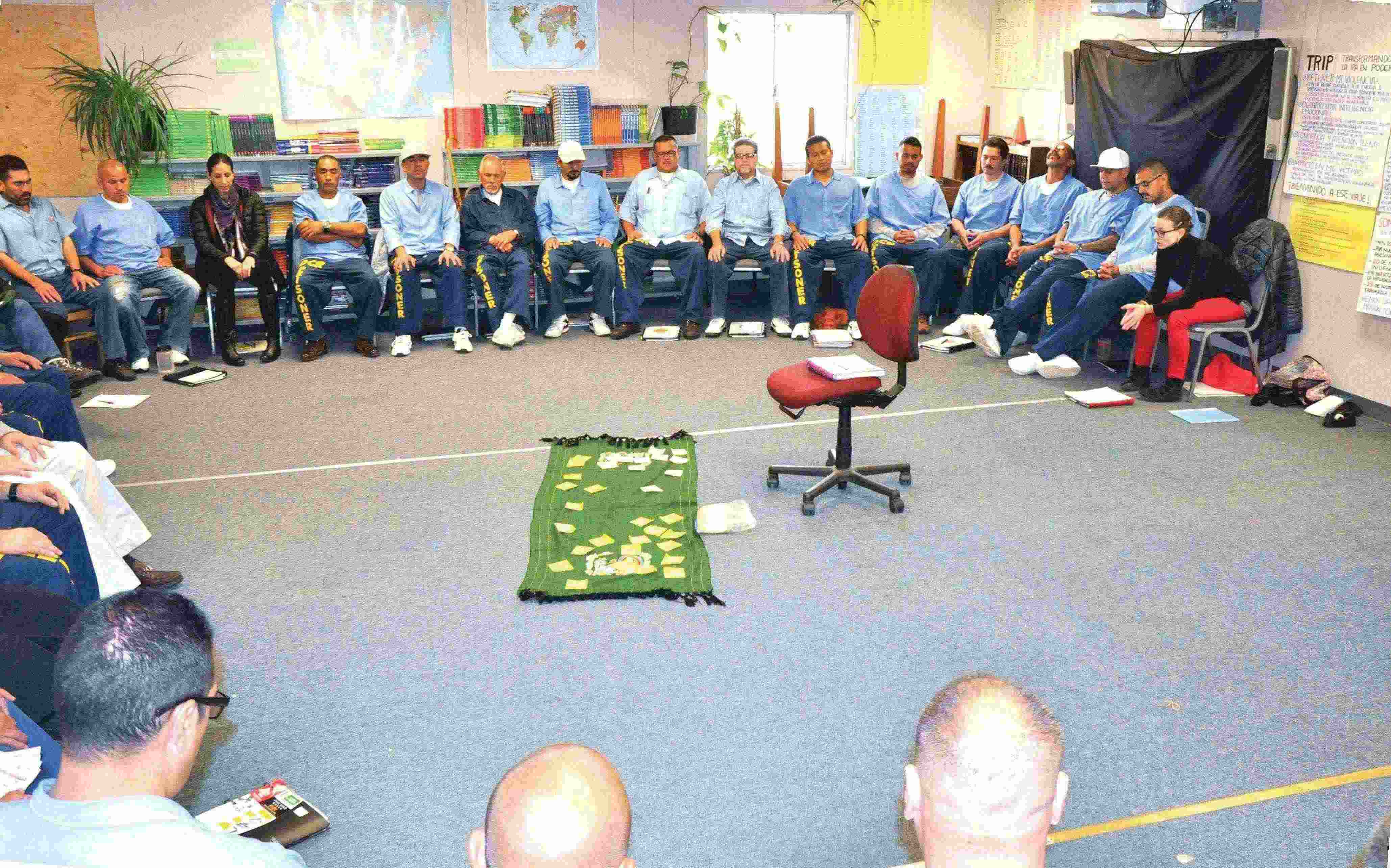 Facilitators and inmates opening up the group with a grounding meditation

It’s 1:30 on a Friday afternoon, and Alcoholics Anonymous is set to begin inside of the Addiction to Recovery Center at San Quentin.
“Anonymity makes it comfortable for people to talk,” explains AA program director Carl P. “What is said or talked about in AA remains in AA. It’s the principle of all our traditions, because of its anonymous founding.”
The core philosophy of AA is to place principle before personality, according to Carl P. His goal is to provide incarcerated men with a way to examine their relationships, how alcohol affects them, and through spiritual awakening gain the courage to make a change.
As a principle, volunteers and sponsors are required to attend meetings to offer those in recovery moral support and the guidance of someone who made the change.

Incarcerated AA Chairman Greg “White Eagle” Coates said he has been clean and sober since March of 1973. He also teaches the core philosophy of AA at White Bison, a Narcotics Anonymous Group rooted in spirituality and Native American Culture at San Quentin.
“I only went for the coffee and donuts,” said Coates, recalling his first AA meeting.
In the 12 steps to recovery from an addiction to alcohol, the first step is the most important one, says Coates.
“Admit that we are powerless over alcohol, and our lives have become unmanageable,” Coates said. “The first step is the only step you can do 100 percent of. You can’t quit for your wife, your kids, you do it for you.”
Coates watched all his male relatives—his dad, his uncle and his grandfather—die from alcohol. Coates himself almost lost his life because of alcohol.
“I was drunk driving and went through a windshield after hitting a eucalyptus tree,” he said.
AA has contributed directly to his rehabilitation. After being in prison since the 1970s he was granted parole after 39 years because of his commitment to sobriety.
AA Sponsor Don R. has been involved in AA recovery for 32 years. He been sober 27 years, has a sponsor, and also is a sponsor to five others.
“I’ve seen miracles happen like what has happened to Eagle,” Don R. said. “I’ve seen families be put back together from fathers getting sober and mothers getting sober also. I’ve seen men go to AA who couldn’t read or write and get an education.”
It’s an addiction and recovery group for those who traded everything near and dear for another drink according to Don R. who stated this with conviction, “And even if we don’t get our family back we still learn to stay sober.”
AA counseling is available six days a week in several locations in and around the prison.