Pope Francis declared executions are an attack on human dignity and the church would work with “determination” to abolish capital punishment worldwide. The Pope also made official changes to the Catechism of the Roman Catholic Church, according the New York Times.
The Catechism is the book of doctrine for 1.2 billion Catholics and is studied by adults and taught to children. Ending the death penalty is among the Pope’s main goals, along with protecting the environment and caring for refugees and immigrants.
Most countries, including those with significant Catholic populations, have already abolished the death penalty, according to Amnesty International.
However, in the United States, where capital punishment is still legal in 31 states, a majority of Catholics support the death penalty while also supporting the end of abortion. The Catholic Church’s new stance aims to change this view on capital punishment, which the Pope once called fostering “vengeance.”
“It becomes binding for bishops to defend life from the initial state through all phases to the very end,” said Mario Marazziti, coordinator of the global anti-death penalty campaign of the Community of Sant’Egidio in Rome. “Even for those who are guilty.”
The changes in doctrine could put Catholic politicians in difficult positions, especially Catholic governors like Greg Abbott of Texas and Pete Ricketts of Nebraska, who have presided over executions.
John Gehring, director at Faith in Public Life, a liberal-leaning group in Washington, said, “If you’re a Catholic governor who thinks the state has the right to end human life, you need to be comfortable saying you’re disregarding orthodox church teaching. There is isn’t any loophole for you to wiggle through now.” 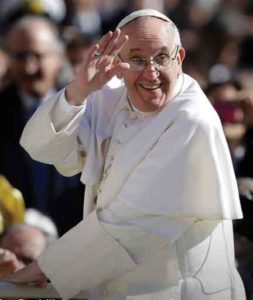 This ruling could also complicate the lives of American judges who are practicing Catholics, including U.S. Supreme Court Chief Justice John G. Roberts, Justices Clarence Thomas, Samuel A. Alito Jr., Sonia Sotomayor and, if approved, the latest court nominee, Brett M. Kavanaugh.
Pope Francis’ new doctrine was described by Chester L. Gillis, professor of theology at Georgetown University, as “part of the regular teaching of the church” and “binding.” But this does not mean Catholics who think differently than the Pope will be denied sacraments.
“There are lots of other teachings in the Catholic Church that not everybody abides by,” Chester said. “Is practicing birth control a mortal sin? If true there would be a lot of couples in mortal sin.”
Vatican News reported the revisions would affect paragraph 2267 of the Catechism.
“The dignity of the person is not lost even after the commission of very serious crimes,” Pope Francis said in 2017. “The Church teaches, in the light of the Gospel, that ‘the death penalty is inadmissible because it is an attack on the inviolability and dignity of the person. And she works for the determination of its abolition worldwide.’”