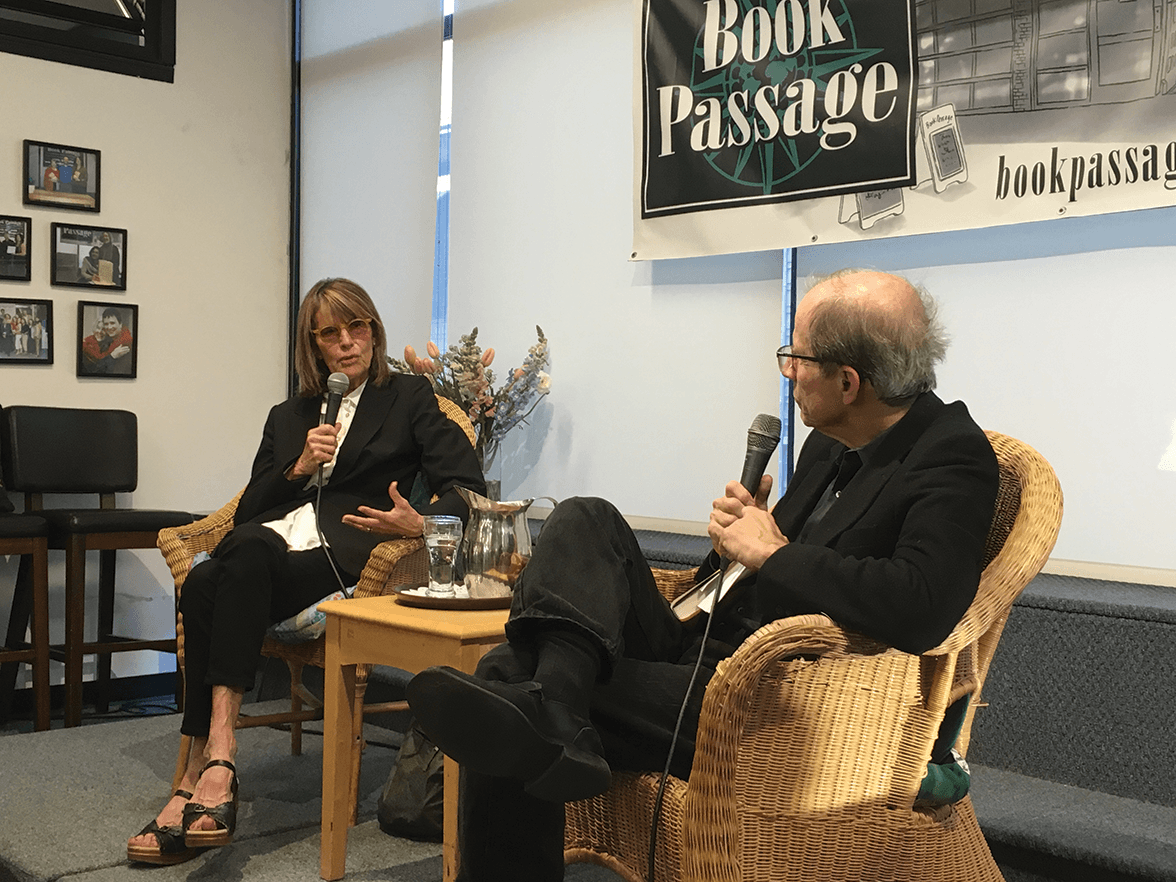 Author Nikki Meredith being interviewed by Michael Krasny, the host of the NPR Forum

It took Nikki Meredith more than two decades of prison visits, trips into the California desert, and prolonged research to knit her memories, reactions, opinions together and write the words that describe the crime and the punishment in The Manson Women and Me; Monsters, Morality, and Murder (2018).

What makes The Manson Women and Me a compelling read is the close scrutiny Meredith applies to investigating the mindsets, before and after, of Leslie Van Houten and Patricia Krenwinkel, two of the three women at the center of the “Manson Family” crimes. Meredith also provides a clear look at the women 40 years after their crimes. Susan Atkins, a third woman involved in the crimes, appears more briefly in The Manson Women and Me.

Meredith discusses her own life in the context of the culture and upbringing of that time, adding an historical and personal layer that makes the narrative relatable. While a student at Hollywood High School, Meredith joined a sorority-like social club that included a girl who years later became a trusted recruiter for the Manson Family. Another high school acquaintance became an attorney on the prosecuting team at the Manson trials.

Meredith’s own movingly naïve, 1950s perception of how women should handle abusive relationships was interjected into the story, causing readers to think about the 1960s, when the crimes took place, and how much western masculinity influenced Van Houten and Krenwinkel.

Meredith is candid about her brother’s teenaged history with the criminal justice system, and writes about her own experience with high school peer pressures, something that all readers can empathize with — social status being vital to the self-image. However, when Meredith writes of the challenges she faced in her own life with the similar challenges of the Manson women, an uncomfortable question emerges: how could these mid-century, middle-class women commit these gruesome murders?

To address the question, Meredith cites psychiatrist Robert Jay Lifton’s reference to the Germans during the Holocaust:

In the end, journalists, psychologists, law enforcement, and the public might agree that a cunning psychopath manipulated the three women, but as Meredith points out, “they did choose to be with him.”

While I believe that Pat and Leslie were subjected to extremely manipulative techniques, it’s still astonishing that the socialization of a lifetime was stripped away in a few mosnths and that it took more than five years for their basic humanity to re-emerge.

“I think that one of the things missed is that Pat and Leslie believed they were important to the world. They were looking for a cause greater than they were, like most of the Jihadists believe that by killing infidels they are making it a better world,” Meredith said on a KQED interview last April. “Manson had convinced them that wealthy families like the Tates, represented conventional society that represented evil in the world.”

The Manson Women and Me is about understanding the totality of human nature—empathy, and the lack thereof, come up in many of its chapters.

Meredith doesn’t hold back when describing the horrific and gruesome details of the Tate-LaBianca murders.

She researched the annals of history, comparing the Manson murders to genocides in Rwanda and Germany to as well as the cult suicides in San Diego and the Jihadist couple’s killings in San Bernardino.

An arduous journey of judgments, comparisons, and opinions are featured in The Manson Women and Me as the victims’ families and prosecutors seek what they consider a punishment that fits the crime—to never be let out of prison.

After reviewing more than 60 books for San Quentin News, The Manson Women and Me has extraordinary interest for me. I know Nikki Meredith and what I enjoy most is her commitment to the understanding of human nature and our conversations centered on philosophies, politics, and prisons.

She’s an adviser for San Quentin News, and has been helping me with book reviews for about the last two years—although not this one.