A new generation of women activists has arisen. Their calling card is the hash tag #Nevertheless, She Persisted.

These women are challenging the male-dominated political and economic system and breaking barriers. The phrase “Nevertheless, she persisted” was lifted from the US Senate’s recent decision to silence Sen. Elizabeth Warren (D-Mass) during a debate.

Trailblazers include Tamika Mallory, Carmen Perez and Linda Sarsour, co-organizers of the Women’s March on Washington in January. They stood before huge crowds on the Washington Mall and delivered powerful speeches.

The three women appeared at a March 8 “A Day Without a Woman” protest in New York City, where they were arrested.

The New York protest, a part of International Women’s Day, called for equal pay, reproductive freedom, immigrant rights and an end to sexual harassment and gender discrimination. Many businesses and schools around the nation closed their doors in solidarity.

Another young activist is Bree Newsome, the woman who climbed the South Carolina State House flagpole and took down the Confederate battle flag in 2015.

Newsome was arrested and charge with defacing monuments on capitol grounds, but she made national and international headlines for her action. The charges were ultimately dropped, and a bill was passed to take down the flag.

“The space that exists for many of us, as a young Black girl, is so extremely limited,” said Newsome, speaking at Spelman College in 2014. “So that you really can’t go very far without being an activist, without being defiance of something.”

Early on, Newsome was named one of the “20 Coolest Girls in America” in 2003 YM magazine.

She created a Facebook page following the massacre at Sandy Hook Elementary, in Newtown, Conn., in 2012.

“I started this page because, as a mom, I can no longer sit on the sidelines. I am too sad and too angry,” Watts wrote on the organization’s Facebook page. “Don’t let anyone tell you we can’t talk about this tragedy now—they said the same after Virginia Tech, Gabby Giffords, and Aurora. The time is now.”

After the post, Watts talked via Skype with five women in Brooklyn, NY, and they formed the group’s first chapter.

Since then “Moms Demand Action” teams have sprung up in all 50 states with nearly 200,000 members. The organization has compelled more than a half-dozen national restaurant chains, internet companies, and retailers to take a stand against lax gun laws, according to a Mother Jones article.

Fazlalizadeh gained attention in 2012, with her “Stop Telling Women to Smile,” a poster campaign using street art to speak out against street harassment of women.

The original posters were displayed in Brooklyn, NY, where each poster featured a portrait of a woman, with a caption such as, “My outfit is not an invitation” and “No, you can’t talk to me for a minute.”

The campaign was based on interviews with women about their experiences of public sexual harassment and giving the women the opportunity to fight back against their harassers, according to Wikipedia.

Fazlalizadeh was able to run a successful Kickstarter campaign to take “Stop Telling Women To Smile” to different cities.

Fazlalizadeh created an oil painting of former Pres. Barack Obama featured in the book Art For Obama: Designing Manifest Hope and the Campaign for Change.

Pettigrew, 28, was forced into sex trafficking at age 10, and since then, she became a dedicated advocate so other girls wouldn’t experience the same fate, reported Extraordinary.Org.

Neglected by drug addict parents, Pettigrew had been transferred across 14 different foster homes, until she was lured by a man who offered her a permanent home.

All these women have persisted to bring awareness to the American public and the world.

The activist Mallory is known for her fiery speeches and her outspokenness for social justice, health care, gun violence and police misconduct. Mallory also worked as a national organizer for the 50th anniversary of the March on Washington.

Sarsour is a Palestinian-American Muslim born in Brooklyn and the mother of three. She has been in the forefront of major social justice campaigns in New York and nationwide. She co-chaired the March2Justice, leading 100 marchers from Staten Island, NY, to Washington, DC.

Perez has worked inside of prisons and juvenile detention centers in California and New York providing cultural, spiritual and educational events. She organized “Growing Up Locked Down,” a conference on juvenile justice. 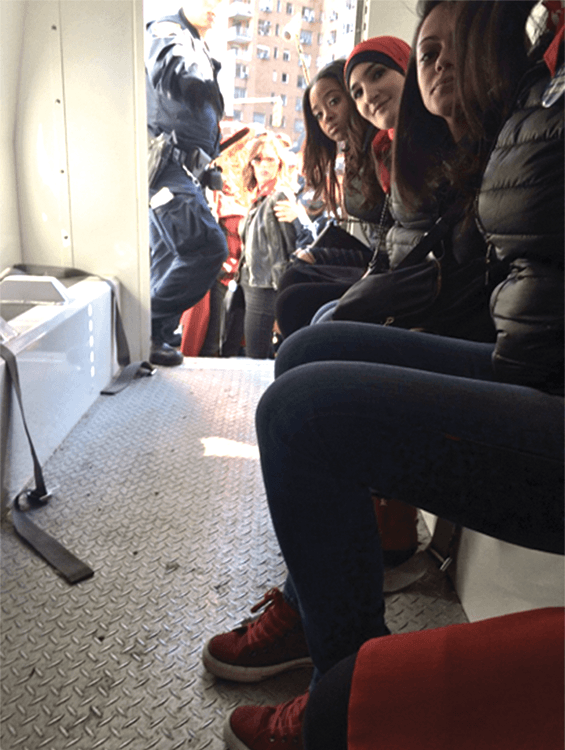 Tamika Mallory, Linda Sarsour and Carmen Perez arrested in New York during “A Day Without a Woman” protest

She has crossed the world promoting peace through civil and human rights.

During the Washington protest, women rallied near the White House against the “global gag rule” banning federal funding for any organization overseas that discusses abortion as a family planning option.

But Rebecca Wood, 37, who brought her 4-year-old daughter, said her complaints were broader. “I used to list so many things on a sign,” she said. “Now I have so many concerns, I just have a sign that says ‘RESIST’” according to a New York Times article.

A man who offered her love turned her into a prostitute and sent her roaming the streets, wearing mini-shorts and pink sneakers, the article noted.

To keep her submissive, he physically abused her and kept her dependent with the offer of a place to stay. At age 17, she was rescued by a welfare worker and ever since has been working with several children’s and women’s welfare foundations to rescue victims of sexual exploitation and abuse. In 2011, Pettigrew was named one of the Glamour Magazine “Women of the Year.”