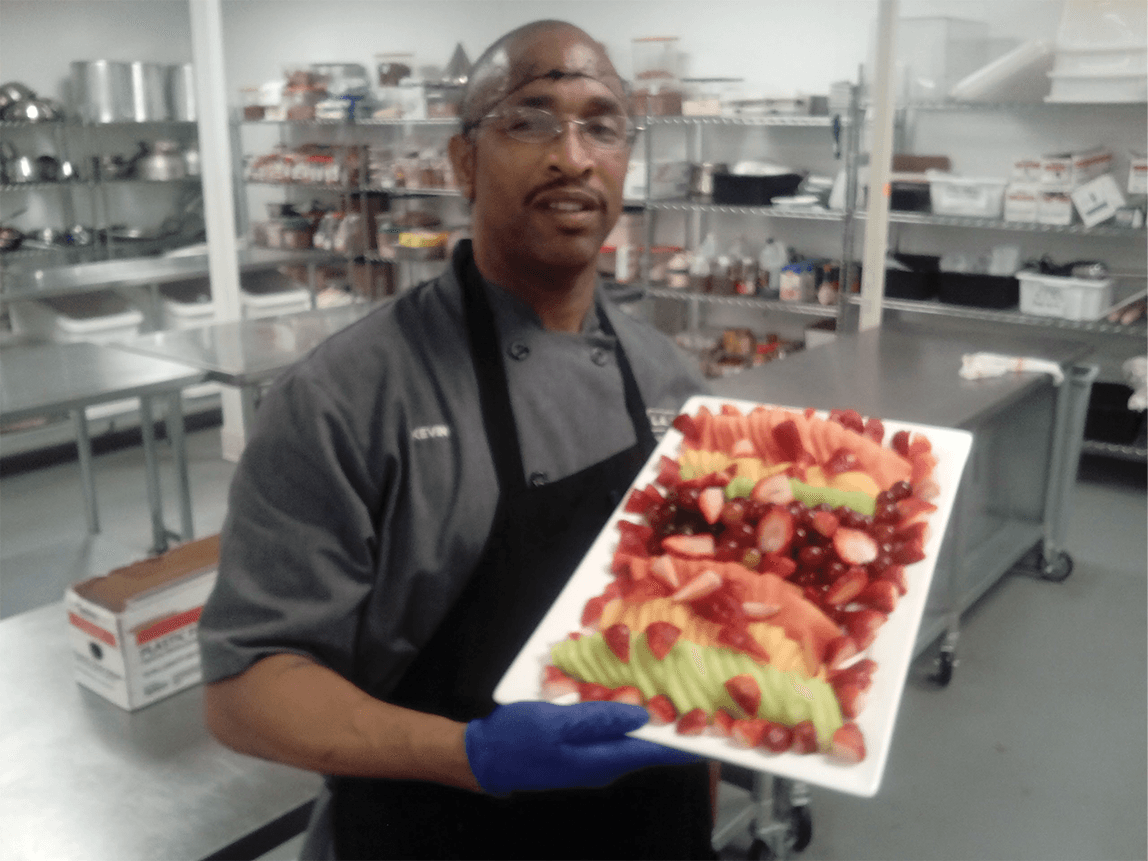 Kevin Williams in the L.A. Kitchen

After serving 31 years in various California state prisons, Kevin Williams, 52, was finally paroled and found his way to a job-training program namedL.A. Kitchen to pursue his passion for cooking. Williams now has a job on the outside and a title, Strong Food Kitchen Assistant.

Williams is not alone. Other former prisoners are making major strides becoming chefs at L.A. Kitchen culinary school in Southern California. Some even had the privilege of preparing dinner at the Governor’s Primetime Emmys Ball last September, according to a Food and Wine article.

“I went to prison at 17 years old and got out at age 49,” said Williams. “All through my time in prison I worked in the kitchen, and when I got out, I was a cook.”

In 2015, Williams came across an L.A. Kitchen memo offering a free 16-week program.

“They had this program feeding people on Skid Row, and I wanted to be part of that,” said Williams.

Robert Egger, entrepreneur and philanthropist, founded the culinary program in 2013.

L.A. Kitchen makes use of imperfect produce, transforming it into healthy meals and sending the finished product to shelters, theRonald McDonald House, and Skid Row.

“We don’t believe food nor people should go to waste,” said Williams.

The program helps train formerly incarcerated adults, young adults who have outgrown the foster system, and those who are homeless, said the Food and Wine article.

“We provide support to all of our students,” said Zaneta Smith, L.A. Kitchen’s associate director of clinical and student services. “I am the social worker on site. We provide short-term counseling that really helps. When individuals are released they want to reintegrate with family. If they were a lifer, don’t have a resume, we provide them some services for that.”

“We provide support to all of our students”

Williams said he spent the first 10 years of his incarceration trying to make a name for himself. “I had a lot of fights and got in trouble,” said Williams. “Then I got my GED. That was a good feeling.

“That was a whole turnaround for me. I learned a lot of trades, but it was hard because people still wanted to see me as the hard-core gang member,” continued Williams.

Williams said he started to address his anger issues and the gang problems once he saw people paroling. He added that he has been out of prison close to three years and has had no issues with law enforcement or drugs.

“Coming to L.A. Kitchen is like a whole new family. I graduated in class 4, and I was voted class MVP because I helped a lot of the younger people,” said Williams.

He learned knife skills and sanitation. He started off as a dishwasher, then got hired while doing his internship.

“My goal is to help the youngsters. That’s my plan” added Williams.

The Emmys dinner was held at the L.A. Convention Center and featured 10 L.A. Kitchen’s graduates. Patina Restaurant Group catered the event and partnered with the L.A. Kitchen program to bring the formerly incarcerated people into its kitchens.

The team was under chief instructor and chef Charlie Negrete, noted Food and Wine.

No one watching the immaculate food preparation process could ever tell which members had less-traditional industry background, Eggers said, according to the article.

Ahna Straube contributed to this story