The California Correctional Institution (CCI) Mental Health Department sponsored an unusual event once again on Aug. 3. Last year, this group won an ethics bowl against California State University, Bakersfield. This year they focused their talent and energy on prison reform. Rarely are prisoners asked their opinions on what might work in their rehabilitation process, but CCI asked, and the inmates responded by creating a research-based presentation to answer this question. In attendance were Warden Joe Sullivan, Health Care CEO Rhonda Litt-Stoner, Chief of Mental Health Dr. William Walsh as well as other institution staff.
The original question posed to this group of inmates was, “If you were given the position of warden and told to create an effective prison for change, what would you do?”
At first, the concept perplexed some of the inmates, as they had difficulty wrapping their heads around such a broad topic, but then they started considering why they have changed and what has helped some inmates change while others do not change. They eventually divided into several groups of three or four to address different topics. A few of the topics researched were: increasing the mental health programs to include every inmate, addressing addiction more aggressively, changing the sterile environment of our prisons, increasing funds for transition into life after prison as well as more opportunities for correctional officers to train and be a larger part of the rehabilitation program. The inmates spent six months gathering data from the library, getting input from their families as well as from the group leader, Dian Grier, LCSW. They studied foreign prison systems as well as other prison systems within the United States in order to determine what works and what doesn’t. 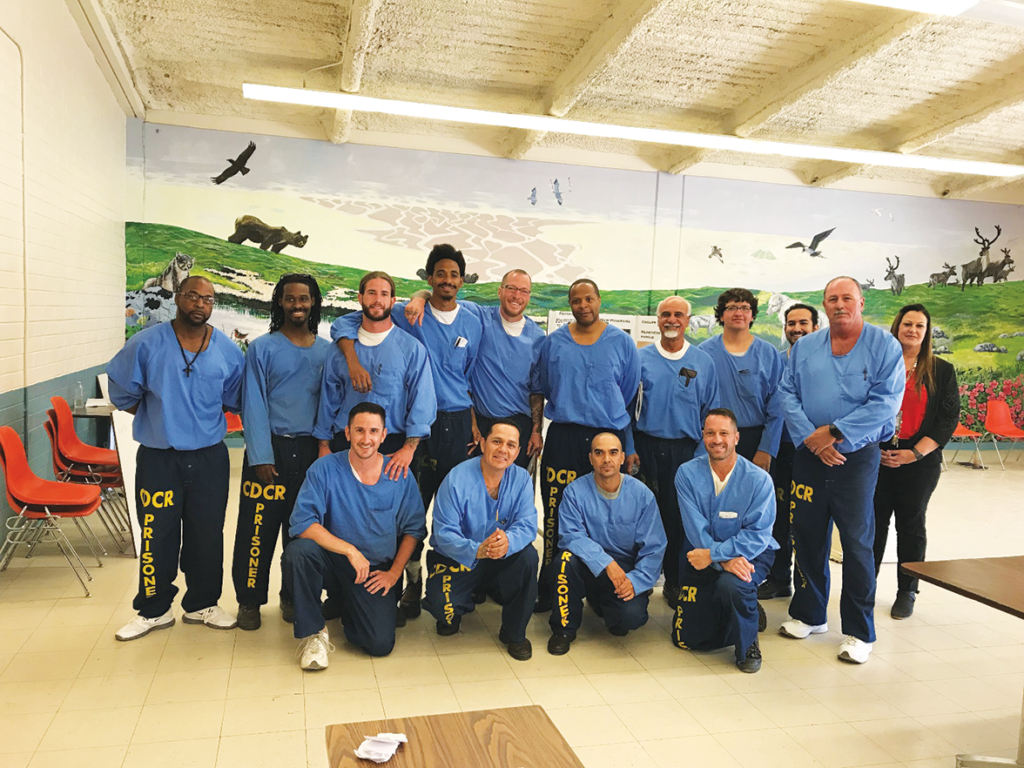 The presentations were well received by staff. According to Litt-Stoner, “CCI’s Mental Health Department has done it again. It never ceases to amaze me, the raw talent possessed by the inmates and the staff’s ability to draw it out through unconventional methods.  It was obvious that the gentlemen put a lot of research and hard work into their projects, all bringing a different perspective on prison reform. It will take these types of innovative approaches to continue to invoke their innate abilities and to teach them conversation techniques to use when addressing conflicts without resorting to violent means. Kudos to Dian Grier and the entire Debate Team.”
Innovative programs such as this debate team are an integral part of a pilot program at CCI that is being run through the Mental Health Department. These types of unusual groups pique the inmates’ interest and some continue to conduct research for many more years after being a part of these groups. According to Grier, the creator of these programs, when inmates are given a chance to participate in groups that interest them, the benefits are immense. The inmates learn social skills, gain confidence and learn to work with others in a meaningful way. Often issues of race and other types of judgments fall to the wayside as they learn to respect one another and communicate in a way that creates true connection to others
The speech regarding correctional officers was cited as being outstanding. One audience member, Jennifer Peters, commented that this speech, along with others presented, showed how being a part of Grier’s groups and the debate team have helped them learn valuable traits associated with prison reform, such as how to better empathize with others. Peters added, “The hard work put into these speeches was unmistakably a job well done.”
The speeches that touched on reform included ways to keep staff and inmates safer as well as how to increase communication and understanding for both inmates and correctional officers. According to Ryan Metier, author and speaker on “Correctional Officers and Inmate Reform,” his first attempt at his speech consisted of pointing out flaws rather than learning to understand and empathize with the difficult challenges correctional officers face. As he continued to work on the speech, his thinking and his view on correctional officers shifted into finding solutions and common ground—a far more effective approach than engaging in the “blame game” or looking at the problem from one perspective.
Metier states, “Through the guidance of Ms. Grier and insight from other inmates and other correctional officers, I have learned to fully listen to both sides of any issue and can set aside any judgments I may have had. This way I have learned to be truly empathic. Because don’t we all just want to be empathetic and accepted? That’s why I’m so passionate about this topic, because I’m passionate about human kindness”
Mental health group sessions currently include Debate and Speech, Drama and Creative Writing and Speaking. The plan is to continue these group sessions at CCI and continue to be innovative in the approach developed to assist inmates in their rehabilitation and help them develop a path to successful re-entry into society upon release.
By Dian Grier
Contributing Writer
PPI’s “Correctional Control: Incarceration and Supervision by State” is the first report to aggregate data on all types of correctional control nationwide.

Officers Being Rewarded For Showing Restraint