To enrich your life, “clear out the old and bring in the new,” Titan Gilroy said to more than two dozen inmates getting ready for a new vocational training course.

“Learn these skills if you want to honor your community and your family,” Gilroy added while pointing at a shop full of high-tech Computer Numerical Control (CNC) machines. He spoke while standing in the machine shop of San Quentin’s newest Career Technical Education (CTE) vocational program, called Titans of CNC Academy.

“It was about two years ago, Titan and Mike pitched the idea to me,” Davis said. “All I had to do is say, ‘Do this.’ It’s the hard work of the volunteers, inmates and staff who got us here.”

Davis pointed out that programs like Titans of CNC Academy give inmates the skills they need to stay out of prison and drive down recidivism rates, which saves taxpayers money.

“There are 132,000 incarcerated men and women in the state’s prisons,” Valdez added. “Out of that, 70 percent will go home someday. That means about 90,000 are getting out. These skills make them a positive force in the community. These programs allow them to take advantage — to look at themselves in the mirror, identify their rough edges and change them.”

Choate chimed in, “This pilot project will allow us to take our success to three prisons that currently have machine shop programs.”

Gilroy gave a tour of the shop while wearing his traditional black t-shirt that sports a soaring eagle and Titans of CNC in big white letters on its front and “Made in the USA” on its back. Two years ago, he assembled a team of experts and recruited several inmates to set up the shop. The grand opening was May 17. 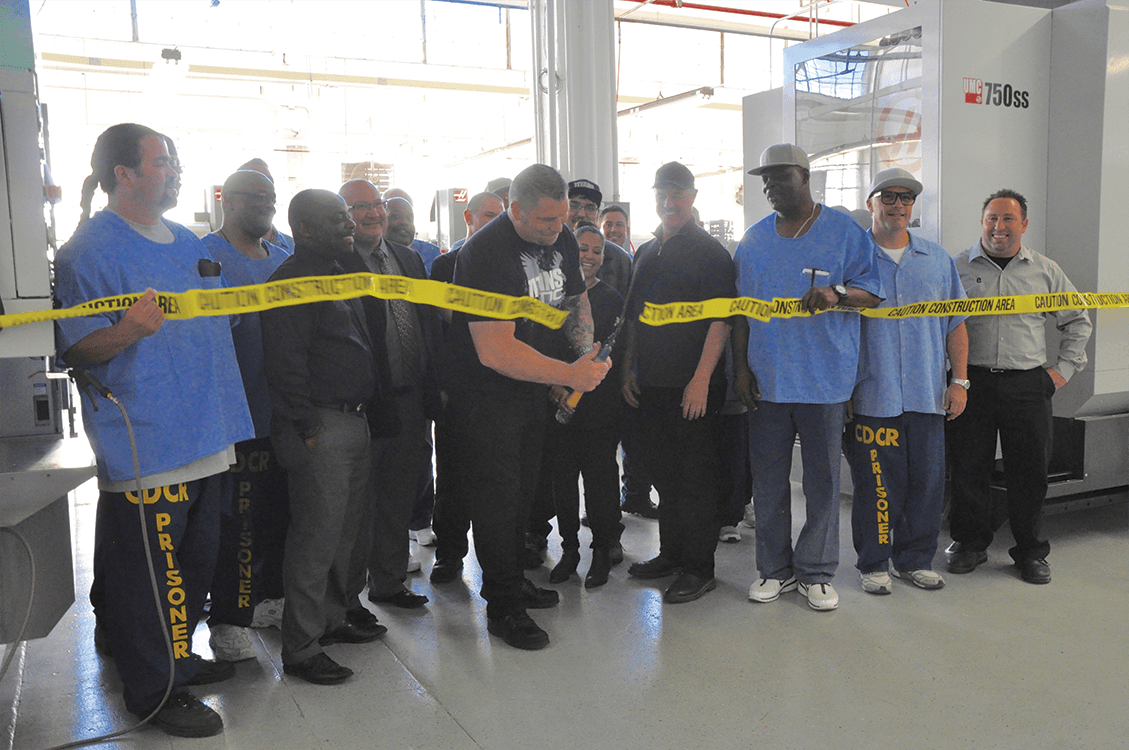 “The entire project has been amazing. Besides my family and employees, this is the best thing I’ve been involved with my entire life,” Gilroy said. “I was one guy coming out of prison and wanted to come back,” he added, “This restoration is going to happen. There are things that we need to conquer. We need to get rid of the darkness and dust and build this facility.”

Titan said he was impressed by the level of dedication shown by the students, particularly inmate Carlos Smith.

“Carlos was over there programming when I came in,” Gilroy said while pointing at the rows of donated laptop computers for the students. “Out there, they say you can’t program until year two. But guys like Carlos are doing it within months. We are here so that you can learn a skill to get a job and take care of your families and kids. It’s about serving society and families and taking pride in that.”

Valdez said he brought the band members to the grand opening as an inspirational gesture to the inmates and for encouragement.

Maxx Cabello Jr. said he grew up from humble beginnings on the streets of San Jose.

“Being in this machine shop inside a prison is an aspect of life that I would normally never see,” Cabello said. “It could have been easy for me to make one bad choice, and I knew people who did make one bad choice — that has always stayed with me. So, rehabilitation and all the programs are amazing and important to do.”

Alex Cabello, Maxx’s older brother, said, “Coming inside San Quentin is satisfying. There’s an educational atmosphere in the machine shop.” The 38-year-old bass player added, “It’s definitely more than I expected — the shop has great opportunities for the inmates.”

Drummer Eric Loera said, “I always see the prison from the outside. I didn’t come here to judge people. We’re all human. Music brings people together.” He added, “I wasn’t expecting to see such a clean shop.”

“Today is another extraordinary day in San Quentin. The men in blue reconstructed this place from a place indescribable to a model of what vocational training is today,” Robinson said. “This big guy came in with his black shirt and big truck, shaking and rumbling, with this idea of reinventing machining inside a prison, and our operations got modernized for people to leave here with hope and opportunity to live the American Dream.”