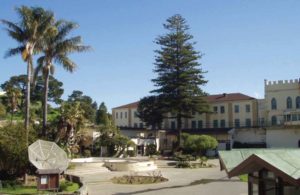 A stream of more than 200 blue shirts flowed into San Quentin’s Garden Chapel June 23 for the Third Annual Gospel Music Workshop. As the men-in-blue took their seats, an unrehearsed Christian rap performance by inmate Calvin Johnson brought the younger members to their feet.

“I was asked to sing something,” Johnson said after he entertained the head-bopping audience of black, white, Mexican and Asian inmates. “When God calls you, just answer the phone.”

Joining the men-in-blue to sing and worship were members of New Faith Cathedral as well as evangelist Paula Bates, Elder Rash and Sister Linda Jackson.

The inmate worship team, led by Chris Harris, took the stage and sang hand-clapping inspirational hymns, including, “Everything’s Going to be All Right” and “I Don’t Mind Waiting.”

Sister Jackson followed the worship team’s performance to sing a finger-snapping gospel. Many of the men stayed on their feet, bobbing heads, smiling and then breaking into rhythmic clapping.  She later sang, “Jesus, I Love You.”

Greg Dixon, with a guitar slung over his shoulder, played keyboard, as Paula Bates sang, “I Got a Reason to Praise the Lord.”

Charles Mully holding a prayer in the Protestant Chapel

“Make a joyful noise for the Lord” Elder Derrick Holloway said, reading from the Bible.

Pastor Mardi Ralph Jackson then led the congregation in a prayer.

“Is there anyone here for the first time?” Carl Saldano asked as a welcoming.

As the newcomers raised their hands, ushers and other people attending services gave them a welcoming handshake.

Before singing, “There Is None Like You,” Elder Bean gave an inspirational sermon and closed by telling the inmates, “Do not lose your joy.”

The next day, Johnson sat on the prison yard and reflected on his experience of attending church and how it relates to music.

“It’s good to participate in self-help groups and sharing your experience,” Johnson said. “For me, that’s what the music is about.

“Working hard and being diligent is a new experience for me. My hope is to get more celebrated Christian rappers to perform at San Quentin for inspiration and to give experiences that could help others who are searching for themselves.”