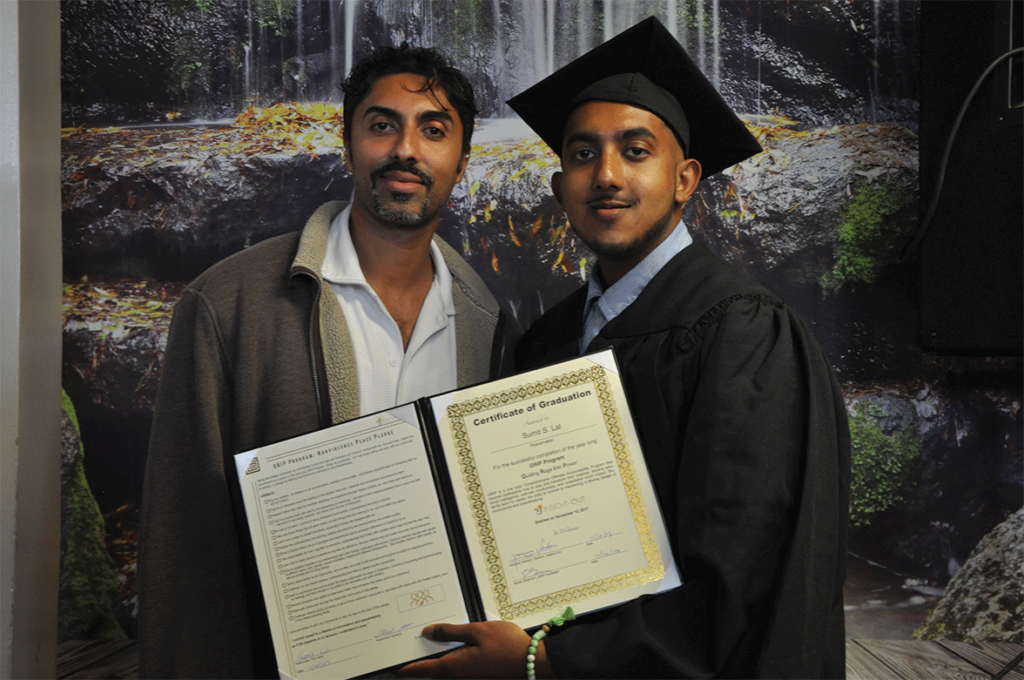 Graduate Sumit S. Lal with family during the GRIP graduation

Families braved fog and rain to watch their loved ones graduate from one of San Quentin Prison’s most highly touted self-awareness programs.

A week later, the sun reflected off the ocean waters as another round of men graduated from the same program.

Phyllis Smith, who traveled from Atlanta, said the program gave her son, Harry “ATL” Smith, 28, what he could not find in his childhood experiences.

“Harry lost his father at 3,” Phyllis said. “He’s had uncles and such, but he’s always looked for someone to show him what it means to be a man. The television only gave him bad images. It made him think being a man meant making a lot of money.”

The program is called GRIP (Guiding Rage Into Power). It is a 52-week comprehensive offender-accountability program that takes incarcerated men on a journey deep inside themselves.

Participants learn how to use practical approaches to heal wounds that, more often than not, came from leading violent and fractured lives. The goal is to learn how to feel connected, responsible to others, and part of a world beyond their own needs—and beyond their past mistakes.

GRIP has graduated 364 men in the last five years — 98 of them have been released to the community — and none has come back to prison.

“The Navajo describe an offender as he or she who acts as if they have no relatives. In other words, if you’re not bonded, you’re not accountable,” said Jacques Verduin, GRIP executive director. “So, the GRIP Tribe provides the member their relatives.”

Each GRIP class is identified as a Tribe. “It’s kind of like a gang, but we flipped it for constructive purposes.”

Tribes get their names by combining all the time the inmates have spent incarcerated, plus the amount of time it took to commit their crimes. Other factors also play into the naming process but have less impact.

“We have five tribes graduating 150 men this year who have served a combined 4,008 years,” Verduin said.

“Growing up without my father killed me inside—deeply. I blamed my father for not being there.

“For most of my life, I was cut off from my feelings. I felt like my lifestyle and crime was my badge of honor. I wanted to hurt my father and for him to hurt like me.

“But today I forgive my father for pain and hurt that he gave me.”

“I felt so much guilt for not being there for my son’s funeral,” Washington said. “I became upset with myself.”

He then explored the grieving process for the parents of the person he murdered, like the experience of a mother seeing a dead son. Washington said that empathy gave him an understanding of a mother’s pain.

“I had to hold myself accountable,” Washington said.

Washington has since worked in a Restorative Justice workshop to bring offenders and crime survivors together for healing purposes. 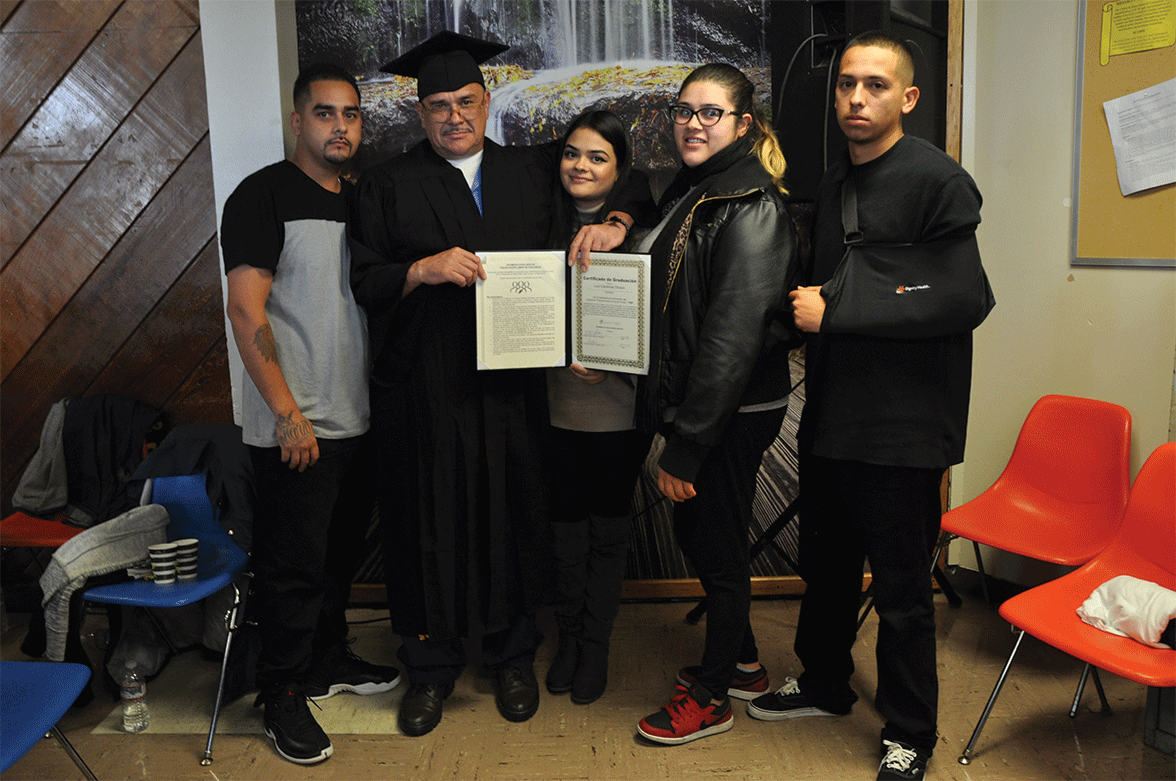 Graduate Kevin Neang, 23, is into his sixth year of incarceration. He’s scheduled to get out of prison in 2020 and plans to live in San Francisco.

“I haven’t accomplished anything since the eighth grade,” Kevin said, sitting with his mother, Annie Vinoukkun, and sister, Sam Neang.

GRIP was the first program he has taken in prison.

“The ‘safe container’ really worked for me so that I could share and have the courage to be vulnerable,” Kevin said. “I could face my shame and know that I am not what I did. I could have remorse.”

Kevin’s sister and mother could see the changes he has made.

“He’s my youngest brother; now he’s like our oldest brother. The whole family feels like that,” Sam said.

Kevin’s mother added, “Our whole family revolves around my young baby boy. He brings good vibes to the family.”

“The robe hung in my office wall for a year. I was grateful. This robe is symbolic of Muhammad Ali to speak his mind.”

Kevin said that now he has an understanding of victim impact.

“I was able to see what my actions did. I know that I will never commit any more harm,” Kevin said. “It’s official — as of today, I am a peacemaker!”

“It was very emotional for me. He’s my little brother,” Turner said. “I’m 14 years, 6 months and 9 days older than him. When I knew that I was going to make it to San Quentin to see my brother, everything just fell into place.”

Parratt called the program The Cream of the Crop.

“One month ago, I had a heart attack and then I found out I have diabetes,” he said. “On top of that, I had prostate cancer. It has been in remission for a year.

“The program taught me how to stop, observe and process things happening around me,” Parratt said. “I learned how to get rid of negativity and stay peaceful. I wanted my sister to see the changes in me.”

“This wasn’t easy getting here,” said Guss Edwards, who is in his 34th year of incarceration. “I did eight and a half years in solitary confinement. But, thanks to the hunger strikes, I’m here today.”

He said GRIP allowed him to face his inner demons.

“When I got to my parole hearing, all the spirits of facilitators were in the parole hearing with me and the commissioner said, ‘You are no longer that person who committed that crime on June 24, 1977. You are no longer a danger to public safety.’ I was granted parole,” Edwards said and was greeted with audience applause. 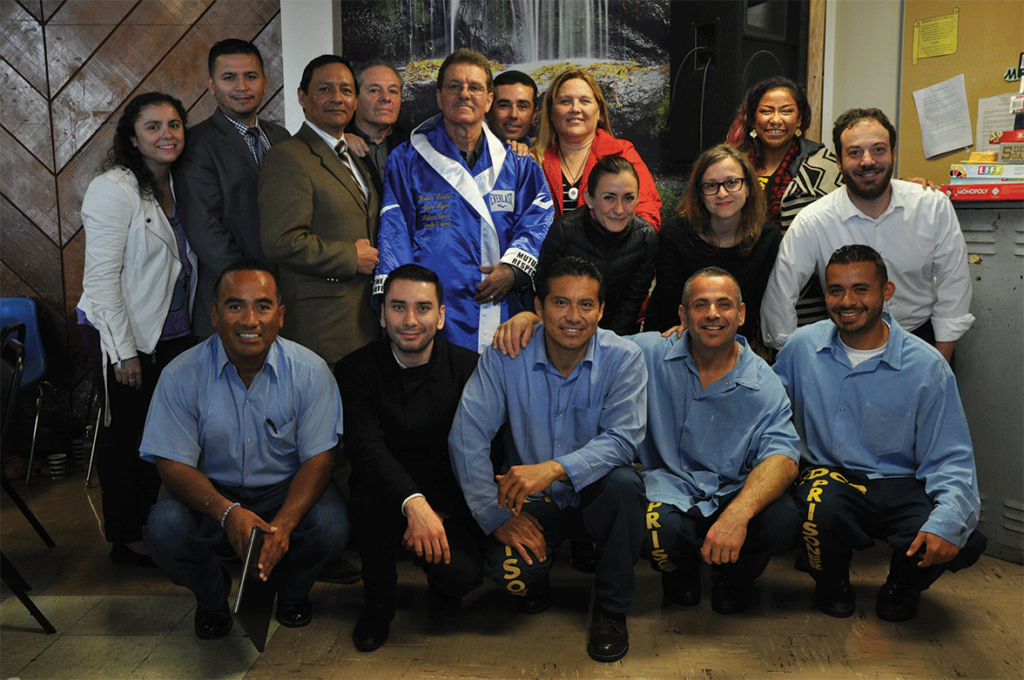 The Spanish Grip class with the Mexican Consul at during
graduation

Each year, a GRIP participant or facilitator is honored with a boxing robe engraved with Muhammad Ali’s name. It is awarded on an annual basis to somebody who “against great odds, came out on top.”

Melissa Davis, a Marin County probation officer who teaches a GRIP domestic violence course and is a survivor of crime, received it last year.

“The robe hung in my office wall for a year. I was grateful. This robe is symbolic of Muhammad Ali to speak his mind,” Davis said.

She handed the robe to Nicolas Garcia and Carmen Vargas in honor of their brother, Arnulfo T. Garcia, a GRIP facilitator who earned his way out of prison after nearly 17 years but died in a car accident two months later.

“Arnulfo was a peacekeeper and peacemaker and editor of San Quentin News. It is my honor to award this to Nick and his family,” Davis said.

“It’s a good feeling to accept the robe for my brother,” Nick said. “I’m very emotional, because I feel the presence of ’Nufo in the room. I feel the sensation in my heart, because I also feel the love from everyone who loved my brother. I’m here to honor you and the work you’ve done.”

Susan Shannon recognized Nov. 17 as the day that marked the death of Tony Miles, brother of facilitator Vaughn Miles.

Shannon wanted Vaughn to teach a grieving class. Vaughn was reluctant, but after Tony was killed, Vaughn became one of the most effective teachers of grief and loss, Shannon said.

“He’s helped hundreds and hundreds of men on the inside to learn how to grieve,” Shannon said. “Strangely, because of Tony, many people have benefited, through Vaughn, the lessons of grief and loss. I would like to, in honor, make Tony a lifetime member of GRIP.”

“Taking full responsibility is the first step of true manhood,” Jackson said. He learned that by reading the book.

Jackson told the graduates that they are in control of their humanity and that they must challenge their old belief systems and show love to everyone.

“A man understands the pain and damage — the suffering that he’s brought to his victims and families. In our true manhood, there is no denial or shame about recognizing that,” Jackson said.

“It was good for my dad to see the work that I do,” Thomas said. “He’s always apologetic for not being there for me as a kid.”

Buckner said that GRIP could be applied to “every facet of your life,” adding, “I see my daughter as an exceptional person.”

Ayoola Mitchell sat on a survivor’s panel for one of the graduating tribes.

“It’s not a normal society where people are so disconnected and don’t understand it’s damaging,” Mitchell said. “The healing of our country and culture begins with the work that you are doing in that GRIP room.” She added, “You can’t put people in a box and not believe that it is not our problem.”

“Nobody is born in a vacuum. No one is born bad,” Mason said. “I will never be able to find all the unhealed persons, but there are places to engage. There isn’t anyone who couldn’t benefit from dealing with past traumas — the military and police could benefit. Restorative Justice is the way to turn it away from violence and get to healing.”

Glenn Hill served 41 years behind bars. He’s been out of prison for about a year.

“I was free a year before I got out of prison,” Hill said. “GRIP has helped me stay out. When somebody bumps into me on BART, I don’t get mad; I just get out of the way.”

Graduate David Dorsagno combined all of the GRIP acronyms, such as STOP, Q-TIP, ID Moment, etc., to create a lively spoken-word piece, explaining how the program keeps participants on the straight and narrow.

Chaplain Mardi Jackson’s benediction praised GRIP as “a program that is impactful in ways that are tangible,” adding, “what a vision Jacques has for you all.”