Dr. L. Marez could probably teach just about anywhere, but she returned to a place she loves to teach — San Quentin State Prison.

She said she has taught at every level from K-12 to university. She even taught courses on teaching elementary and secondary math, classroom administration and management and educational psychology. In 1999, she won a Nummi’s Most Promising New Teacher of the year award while teaching at Thornton Junior High School. In addition, she has a doctorate in Organization and Leadership. Despite her creditials, she’d rather teach in prison.

“(Teaching in California’s public K-12 system) was like pulling teeth because so many of the children didn’t want to learn,” said Marez. As a former Air Force Captain in charge of engineering for the nation’s Consolidated Space Operations Center, Marez wanted to encourage young people, especially students of color, to pursue careers in math and engineering. However, after nearly 10 years of teaching, it became difficult for her to inspire kids within the public school system.

While searching for deeper meaning, Marez ran across an article about a woman who taught inside a prison.

“It talked about (incarcerated people) really wanting to learn. She didn’t have a classroom, 12 students shared one book, and she even taught in a shower room, but all the men wanted to learn. They didn’t care how or when.”

Dr. Marez realized if she wanted to continue teaching, she would have to go where people wanted to learn — prison. 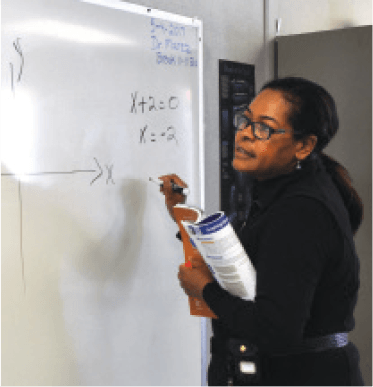 Dr. L. Marez demonstrating how to solve a math problem

She had never been inside a prison but decided to take a leap of faith. She searched the state jobs website and applied for a position as a teacher “behind the wall.” When the state didn’t get back to her right away, she went to teach at a Catholic school. Then there was an offer from California State Prison – Solano, but she passed, hoping to hear from San Quentin. In 2008 San Quentin called, and Dr. Marez got the job.

“I thought ‘I’m going to a place where angels fear to tread’ but I remembered Jesus’ words, ‘…when I was in prison, you visited me,’” Dr. Marez said.

Once hired, Dr. Marez found out that students who don’t have a GED or high school diploma were forced to go to school under an old prison rule that was resurrected and enforced under Gov. Arnold Schwarzenegger.

“I ended up with students that didn’t want to come to school,” Marez said. “They fuss and curse. Rather than demanding, I would ask what was their experience like when they were last in school. Some students shared they were told they were dumb; some didn’t want others to know they couldn’t read. I learned that you have to cut through all of the vibrato first before you attempt to give anybody any work.”

Two years after landing at what she calls the best job she ever had, furloughs and layoffs started throughout the California Department of Corrections and Rehabilitation (CDCR). In 2010, Marez ended up reassigned from teaching in San Quentin to working as Associate Governmental Program Analyst — a non-teaching job — in Sacramento.

“I didn’t have enough seniority to stay teaching,” Marez said. “We got put in all kinds of jobs that were not related to what we came here for — to teach.”

In 2012, CDCR started calling people back to teach, and Marez ended up at Soledad, 125 miles from her home. Then she went to work as a probation officer for more than two years so she could be close to home. Next, she taught at Salinas Valley State Prison, a maximum-security facility.

“I didn’t give up my home here because I was hoping to one day to return back to SQ,” Marez said.

In March, San Quentin hired her again to teach the Voluntary Education Program.

“She reminds me of the movie Hidden Figures,” said Achilles Williams, 67, who has been incarcerated for 21 years and assists Dr. Marez. “A guy came in with a quadratic equation that he copied down wrong, and she still figured it out.”

Dr. Marez said, “I’m back home, and I’m just trying to get these guys ready, because they’re going home. It’s not just about decimals and percents. An educated individual is a civilized individual. When they say education offers hope, in my humble opinion that’s what we are really here for.”