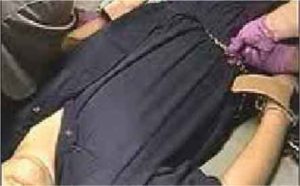 Poor people and people of color have fewer resources to deal with mental and physical health problems when released from prison, The Atlantic reported.

Instead of having measures to help the vulnerable manage their well-being, society punishes those battling addiction and mental health issues with more time in prison, exacerbating the problems further, the story stated.

This is highlighted in Homeward: Life in the Year After Prison, a new book by Harvard University researcher Bruce Western.

Western led the Boston Reentry Study, which surveyed 122 people released from Massachusetts Department of Corrections facilities around Boston between 2012 and 2014, according to The Atlantic .

Along with his co-researchers, Western studied the subjects for a year following reentry, seeing many of them go through unemployment, homelessness and mental illness or even going back to prison.

“So much happens in those first 30 days, and there are so many other kinds of stress that they’re dealing with,” Western told The Atlantic.

Most of the study’s participants were in poverty six months after release. Full-time employment was rare, and although 43 percent found work of some kind within two months, most relied on family support or government assistance for survival.

The study also showed a racial disparity where Latino and Black participants with strong support networks were less likely to obtain jobs than their White counterparts who had little to no support network.

Along with poverty, Western found that “human frailty” was possibly the central feature of incarceration. He defines the term as “the mental infirmity and the physical problems that accumulate with people under poverty.”

“The general finding is that physical health tends to improve in prison and then dramatically decline after people leave prison,” said Western. “This is mostly because they’re better able to manage chronic conditions while they’re in prison, and they’re able to stay on their meds and so on.”

Two-thirds of the population surveyed had a history of mental illness or addiction. Fifty-four percent reported a history of drug and alcohol abuse, and one-third reported arthritis, chronic back pain or other disabilities.

The Medicaid program in Massachusetts automatically enrolls program participants upon reentry and provides low or no-cost mental health services, but many formerly incarcerated people will not seek preventative help.