While playing keyboard AJ Gonzales sang “Roses Instead,” as an audience of prisoners and community members made their way inside San Quentin’s Catholic Chapel on Dec. 29 for an open mic event.

“San Quentin is the biggest program hub I’ve seen, since I’ve been in prison,” said Gonzales, 38, who has been in and out of prison and is scheduled to get out in about a year.

A month ago, Gonzales settled in here by way of San Quentin’s reception center.

“There are so many opportunities that you can take advantage of, if you want to be a changed man,” he said.

Lemar “Maverick” Harrison featured Gonzales on a hip-hop gospel “Oh Lord,” a song about the trials and tribulations of adulthood. 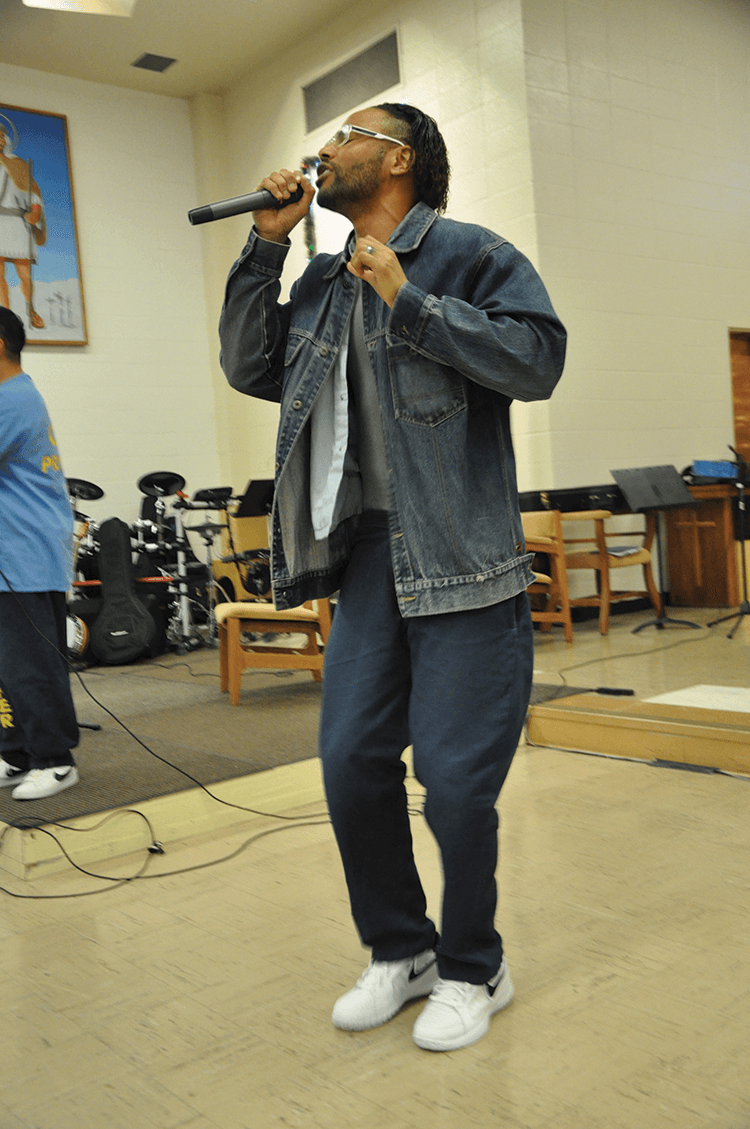 “I will call upon your name – to keep my head above the rain,” Gonzales and Harrison sang in the chorus.

Jason “Alias” Jones and Eric “Maserati-E” Abercrombie also featured Gonzales in “Can’t Keep Me Down.” The audience stood to the upbeat hip-hop piece and joined in the chorus, “You can’t keep me down.”

“I can’t sing. I can’t dance. I can’t do anything but put a video together,” Asey said. “Hopefully it will give you guys some inspiration.”

The video, narrated by Nelson T. Butler aka Noble, described the self-esteem-building power that getting a college education gave him while incarcerated.

“There’s no better feeling in the world,” Butler said.

Radio producer Louis Anthony Scott’s speech, “Value of Education” explained that earning a college degree from Patten College at San Quentin is an effective way to cut down recidivism rates.

Scott said that correspondence courses didn’t work because when he needed help there was no one there to answer his questions.

He credited his ability to structure radio stories to learning from the college program. He went on to talk about the award-winning journalists in the prison’s media center.

“We are men-in-blue competing against outside journalists and we are winning,” Scott said to an applause.

Mackey Michael’s “60 Bars or Better” was a rap with a deep bass sound that kept the audience on its feet clapping. One inmate got up dancing in the aisle and got encouraging applause.

Pangthong told the audience to “Turn to your neighbor and ask what you’re looking forward to in 2018?” The answers varied from “going home” to “seeing my mamma” to “more money” to “more visits.” One person even wanted “to get to a fire camp.”

His “This Will Definitely Not Be as Funny as Last Year” made fun of Chinese culture as well as Chiu’s struggles in coping with prison life.

The dance moves by Markelle Taylor brought laughter, then applause, followed by whoops and hollers, concluding with a standing ovation.

Chris Marshall, Nate Collins, Juan Carlos, and Edmond Richardson performed “Uninvited.” The skit took place at a train station. It was a spoof, full of racism and sexism. It tackled mass incarceration, immigration, slavery, and xenophobia. 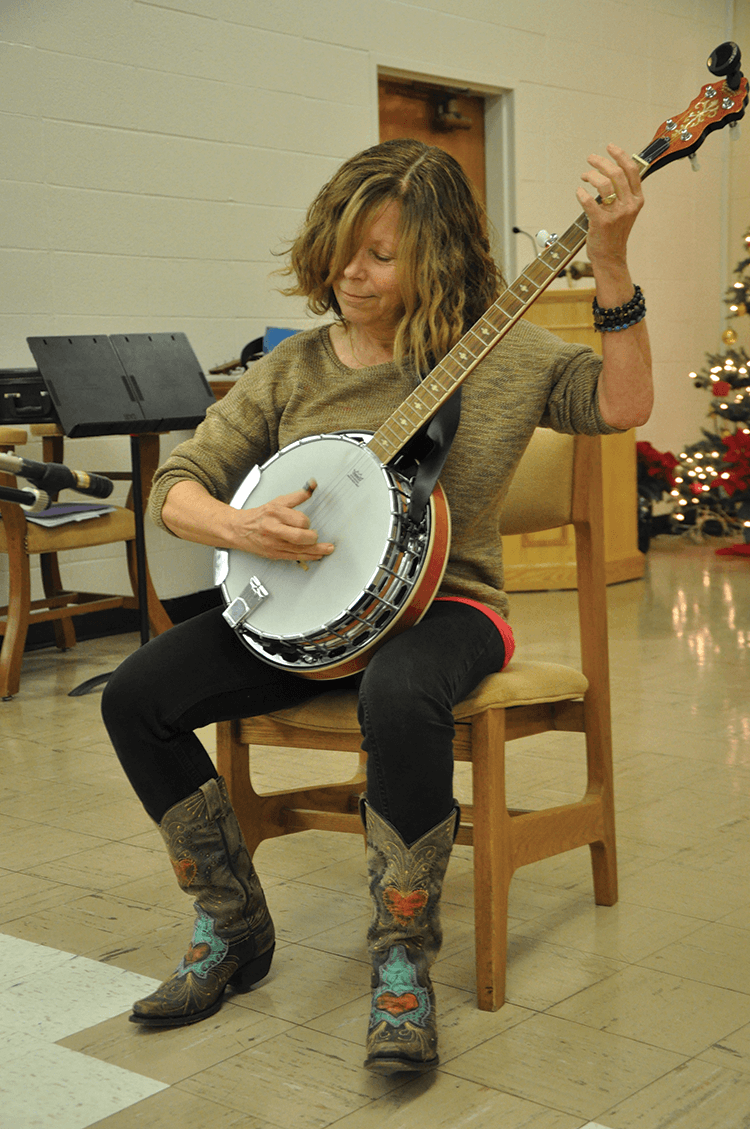 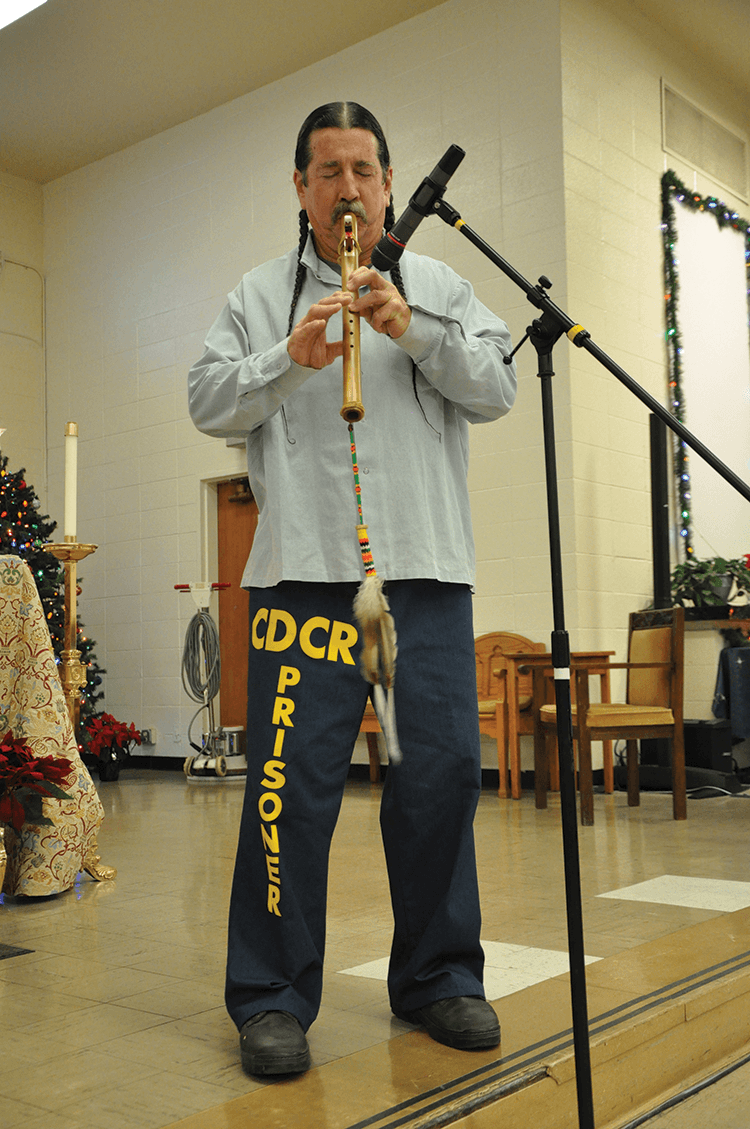 Curtis “Rabb” Askins made fun of success and capitalism as he read,” He Got It Made.”

His parody is about the advantages of being homeless.

The sharp criticism lampooned the pressures of finding happiness in a consumer-based society.

Fateem Jackson read “Finding Rapture.” Jackson spoke about his life’s journey in search of bliss and peace and happiness.

After the North Bay fires, Stanley Baer was inspired to write poetry.

“After seeing the faces of the people who died this year, I wrote this one,” Baer said before reading “Embers, Fire, and Flames.”

Aaron Taylor and Abercrombie performed “Children of the Sun” on their guitars. The audience chimed in by clapping to the strumming of Taylor’s guitar, while Abercrombie accompanied on lead.

It was the first time performing before a live audience for Daniel Plunkett as he sat with a classical guitar and played “Greensleeves” arpeggio.

Gregory “White Eagle” Coates on flute and Susan Hirsch on banjo played a duo as an interlude to the show.

Seth “Venus” Rountree talked about meeting a Shoshoni relative of Sacagawea about 30 years ago.

The meeting taught her about her culture, leading back to the 1800s and the Lewis and Clark expedition.

Michael Moore read a short story, “The Rise and Fall of Freedom and The Wall.”

The story described how he escaped the woes of prison life, crammed into a housing unit with 800 men.

Moore talked about what it is like to walk to the prison yard.

“I’m certain people walk like they drive,” Moore said, hoping in the rush that no one would walk on his heels.

The story descriptively talked about a “bottleneck” as people made it to the yard, comparing it to freeway traffic.

Chan Park read “A Space Within Me.” He said learning English as a second language, and coming from Korea as 5-year-old boy, was a culture shock.

“Strange-looking people would come up to us, and I didn’t understand a word they were saying,” Park said. He added, “First grade was all joy. It didn’t matter if a person was Black, White, or Mexican.”

Anthony “Habib” Watkins read “An Ode to my Father,” which praised his father as his hero and role model.

“He gave so unselfishly,” Watkins read, “Every time I look in the mirror, I see you…there’s no precious jewels that could compare to you.”

Gonzales later said in an interview, “I’ve gotten older and my thinking has changed. I now realize that if I don’t change, I can be stuck inside here forever.” He added, “I have parents and a wife who I would like to reunite with.”