San Francisco District Attorney George Gascon’s attempt to reform law enforcement is generating an all-out battle with police officers and deputy sheriffs, the San Francisco Chronicle reported.
Gascon is a former career cop, who ascended to become the city’s top prosecutor. He finds himself in an ugly dispute with Police Chief Greg Suhr and the police officers’ union. This animosity stems from how he proposes to set priorities for fighting crime in the city, according to the Chronicle.
The rift escalated when Gascon lambasted the Police Officers Association early this year in a statement to a blue ribbon panel of retired judges he used to investigate corruption in the San Francisco Police Department, the story said.
Gascon described the city’s law enforcement community as “an old boys club.” These remarks upset the rank-and-file, and many cops were angry about Gascon coming in and they never have let him forget it, the story continued.
“You have to understand, if you sit in my place and you see the trajectory of all this stuff, it’s been one thing after another,” Gascon said of police criticism. 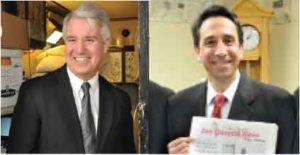 Vivian Ho, who wrote the story, said the union representatives blasted back at him, denying that there is racism in their ranks. However, they accused Gascon at a dinner in 2010 of “making racially insensitive remarks.”

Retired police officer Chris Breen accused Gascon of making disparaging statements, after Gascon consumed a great deal of red wine, about Black officers he worked within the Los Angeles Police Department. This caused an African-American man seated nearby to ask him to quiet down because he was offending his family. Gascon denies the allegations.
To complicate matters, the Gascon recently charged three San Francisco deputy sheriffs with staging “a fight club” for jail inmates. That prompted the deputies’ union to join its police counterpart in accusing Gascon of padding his resume for higher office, Ho wrote.
Gascon told the reporter, “If I really wanted to look at future electability, would I be pissing off every single police union in the country and certainly in this state? If you’re looking for a position in the state, you want their support.”
This confrontation has created uproar in the city’s law enforcement community. “It’s not surprising that many cops feel that they’re being painted by a broad brush,” said Tony Ribera, a former San Francisco police chief and director of the International Institute of Law Enforcement Leadership at the University of San Francisco. Others applauded Gascon’s scrutiny at a time of heightened concern over racial profiling and police brutality, according to the story.
According to Ho’s story, “A prime source of friction emerged when Gascon co-authored Proposition 47, a ballot initiative that reduced six nonviolent felonies to misdemeanors. It passed in November 2014, and supporters and opponents are increasingly debating whether it’s helping people or spurring a surge of property crime.” The police union is sponsoring radio ads attacking Gascon for his practices.
Ho revealed that Gascon faces discord in his own office where he took control of that department after never prosecuting a single case.
There are some prosecutors who opposed their boss’ support of Proposition 47. Some think it was political grandstanding at the cost of their ability to do their jobs. The story said, “Their boss’ growing police reform efforts hold the potential to further complicate their relationships with police detectives and other officers, whom they rely upon to testify in court.”
At trial, police officers must disclose information that affects an assistant district attorney’s ability to prosecute the defendant. The competency of police and prosecutors to work together day-to-day has been bruised by “a lot of generalizations about the police department that are not fair to the rank-and-file,” said Ribera.
County Public Defender Jeff Adachi said, “You have the district attorney and the (police union) arguing about racism when five years ago, they wouldn’t even acknowledge it; that’s progress.”