Under the coaching of 1000 Mile Sponsor Frank Ruona, improved running helped 20 out of 21 men complete a 13.1-mile race around the San Quentin prison yard.

“Ronnie was the only finisher the first two races,” Ruona said.

Since then, Ruona has helped the men improve, and it showed at the July 28 half-marathon race. 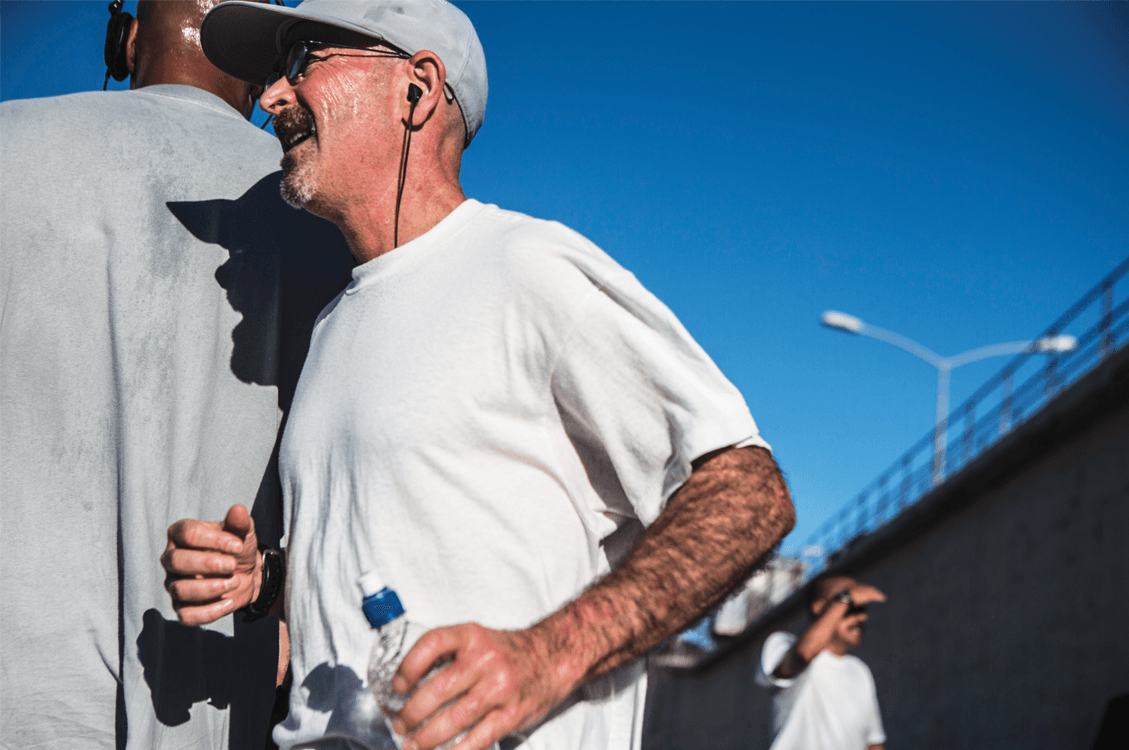 While Markelle Taylor took first place with a time of 1:24:08, Levin accomplished a personal best time of 1:46:58 for seventh place.

Chris Scull dusted his training partner Eddie Herena to take second with a time of 1:34:52.

“I taught Chris how to eat, and he ate my lunch in this race,” Herena said.

Michael Keeyes came in eighth at 1:47:01 and set the 70-year-old half-marathon record, as the first finisher in the club at that age.

Ruona became the 1000 Mile Club sponsor in 2005 after Laura Bowman Salzsieder, the former community partnership manager at San Quentin, called out to the Tamalpa Runners Club for someone to sponsor a track club inside the prison. When no one else volunteered, Ruona agreed to do it. He’s come into the prison almost every week since.

“I approached it like it was a club I coached on the outside,” Ruona said. “I took the attitude that they’re runners. We did workouts same as the outside.

“I enjoy it. We have an usually good group of guys here. It’s as good a group as I’m gonna find whether coaching here or on the outside. They work together as a team. They encourage each other.”

“He come in and everything come together. He keeps us disciplined”

Other volunteers came on board after Ruona. First there was Mary Flagan and Mike McManus. When Flagan couldn’t do it anymore, Diana Fitzpatrick took her place.

Next Kevin Rumon, another member of the Tamalpa Runners Club, came on board.

“You are basically volunteers for us,” Rumon said. “All of us are a flawed people. You guys have a perspective I don’t have. At the least, I can walk out of here.”

Since then, many other volunteers have come on board, including professional runner Dylan Bowman, who won the Istria Ultra Trail Race in April; Tim Fitzpatrick, Diana’s husband; Jim Maloney; and others, including 1972 Olympic Gold Medalist Eddie Hart.

“I appreciate the volunteers coming,” Keeyes said. “He [Frank] and the other volunteers are the glue that holds the club together.”

Incarcerated 1000 Mile Club Member Ralph Legions used to run with Hart and told Ruona about him.

“I contacted Eddie, and he agreed to come in,” Ruona said.

That was back in 2014, and Hart has held a track meet in the prison every year since. At each meet, Hart gives running advice.“It’s amazing,” Wickerd said. “Eddie Hart’s my inspiration.”

Ruona himself brings years of experience to the club. He’s run more than 78 marathons and 38 100-mile runs, and USA Track and Field recognized him as the number one road runner in the nation for ages 55-59. On Friday mornings, he can be seen running around the San Quentin Lower Yard with incarcerated club members.

“He’s our chieftain,” club member Tone Evans said. “He comes in and everything comes together. He keeps us disciplined.”

Ruona continues to coach the club despite battling heart problems. On July 20, he had surgery to correct an atrial flutter. That marked the second time Ruona underwent the two-hour procedure to correct his heart rhythm. The last time was in 2002, and it lasted 15 years before the problem reoccurred.