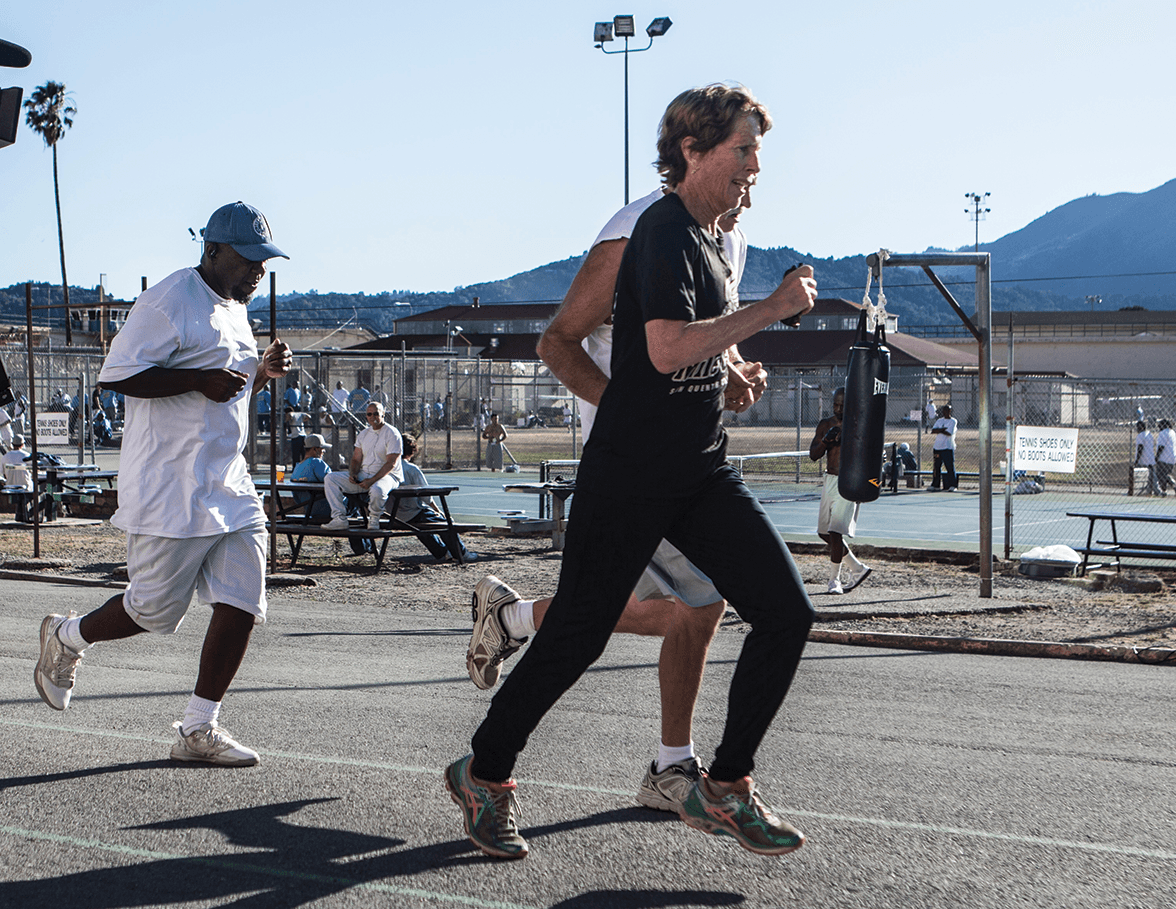 A night of training runs for the 1000 Mile Club at San Quentin turned into an opportunity to honor coaches Diana Fitzpatrick and Dylan Bowman for their accomplishments and dedication to the program.

After serving three and half years as a volunteer for the 1000 Mile Club, Bowman, a professional ultra-runner, announced he was moving back to his hometown, Denver.

“Dylan, you were huge to us,” Tony “Barefoot Tone” Evans, a club member known for running 40 meter races barefooted on concrete, said. “We hope to see you back at San Quentin. We love you, man.”

Between professional races, Bowman shared his time and knowledge with incarcerated runners. The 32-year-old sponsored by North Face and Red Bull has won three out of his last four ultra-marathons — Croatia, Japan and San Diego.

He said he runs 100-mile races because “it’s really hard and it teaches you how to deal with problems in real time with poise and dignity.”

Bowman said he volunteered at San Quentin because “running has given me so much that to be here, to use my craft for good, makes me feel like I’m giving back.”

For club member Troy Dunmore, Bowman’s mentorship has made a huge difference.

At the 2016 San Quentin Marathon, Bowman kept track of Dunmore’s laps. Dunmore didn’t think he would make it through the marathon.

“After mile 20, he (Bowman) really pushed me,” Dunmore said. “He motivated me to get through it. I’m going to miss him.”

On June 25, Bowman’s last day, the club members ran a few miles of training exercises. Afterward, Bowman reflected on what he got out of coming into the prison about twice a month.

“Coming in here helped me understand my privilege as a straight white male from a good family. A lot of people aren’t as fortunate; they’re not bad people, just bad circumstances. That doesn’t excuse crime, but I have respect for the fact that not everybody has equal protection. Yet you guys still get up every day and make a positive impact. That’s what you guys have given me.”

“He motivated me to get through it. I’m going to miss him”

He also said, “No matter where you are in your life, you can always get better and running is a great way to do that. It gives you a platform to give yourself confidence, fitness, improve in other areas of your life, be happy with who you are and be optimistic.”

Fitzpatrick, 60, is a two-time local Dipsea Race champion. This year she came in fifth. She was congratulated for completing the Western States Endurance Run — considered the world’s oldest 100-mile trail race — in 23 hours and 52 minutes. 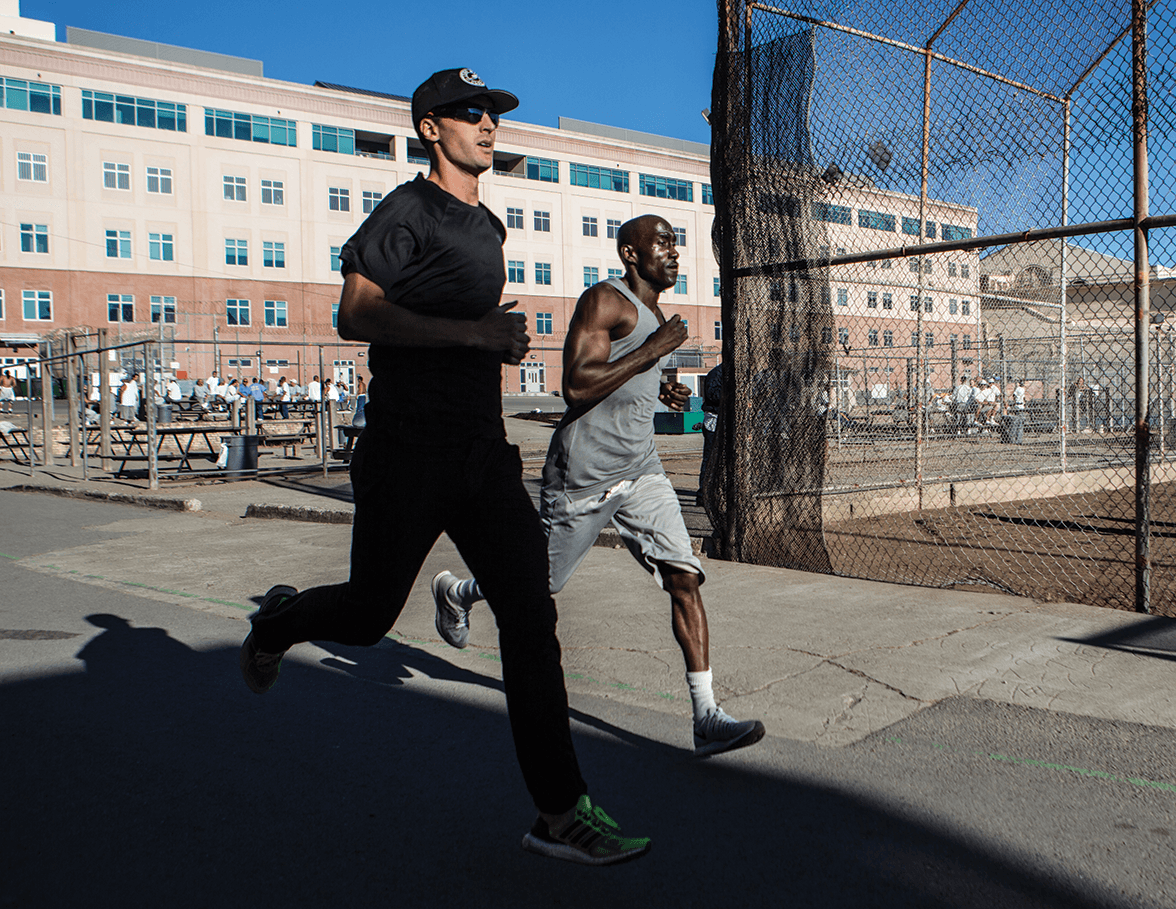 “Diana shows you are only as old as you feel,” 54-year-old club member John Levin said. “That inspires me. Regardless of my age, I’m going to continue to push myself.”

Fitzpatrick started running the June 23 Western States race at 5 a.m. At times, the temperature reached 98 degrees. Fitzpatrick described putting chunks of ice into her vest, shirt and hat as a cooling system.

Kevin Rumon, another 1000 Mile Club coach, ran the Western States race with Fitzpatrick, but he tapped out after 62 miles. Though he didn’t finish the run, Rumon still completed the equivalent distance of two marathons.

Fitzpatrick received a silver buckle for completing the course on trails from Squaw Valley Ski Resort near Tahoe all the way to Placer High School in Auburn in less than 24 hours.

“It’s a nice big silver buckle,” Fitzpatrick said with a smile. “(Running the race)is incredibly emotional. The things you have to go through—the trails, the heat, the footing—it pushes you in a way mentally and physically like nothing else does.”

Fitzpatrick credits her running community for the 100-mile completion.

“It was a team effort,” she said to the club. “I think about all the people that helped me train and my community of runners — you guys.”

Dunmore sees having coaches Fitzpatrick and Bowman as a blessing.