California’s crime rates are falling, according to recent reports by Attorney General Kamala Harris and a research group. 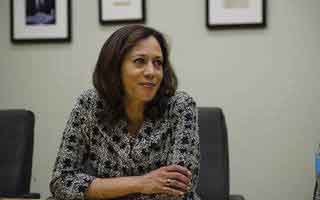 The state’s crime rates have been declining since 1980 (before the Three Strikes Law) and is now below the national rate, according to a September 2012 report called Crime Trends by the Public Policy Institute of California.
Violent crime increased between 1960 and 1992, but is now on the decline, according to federal criminal justice agencies. Property crime, however, dipped to its lowest since 1960, but is now on the rise.
“Had the state begun considering ways to reduce the prison population years ago, based on the evidence, we wouldn’t be where we are today,” the report concludes.
Here is a breakdown of California crime rates, as reported by the attorney general:

California made two changes in its laws that affected arrest and crime data:
–The limit of felony theft was raised from $400 to $950, resulting in a decline in felony theft arrests and the increase in misdemeanor theft arrests.
–Some misdemeanor marijuana statutes were re-classified as infractions. This led to a decline in misdemeanor marijuana arrests.
“I find it revealing that research data shows that crime rates have been on the decline since 1980; given the fact that law enforcement and politicians justified the Three Strikes Law by insisting that crime rates were up,” said R. Simpson of San Quentin’s H-Unit dorm housing.
“I am unaware that crime rates have been on the decline since 1980. I think too many people were sent to prison for minor issues, when the courts could have used alternatives to incarceration,” said R. Davenport, a resident of San Quentin’s Donner Block.