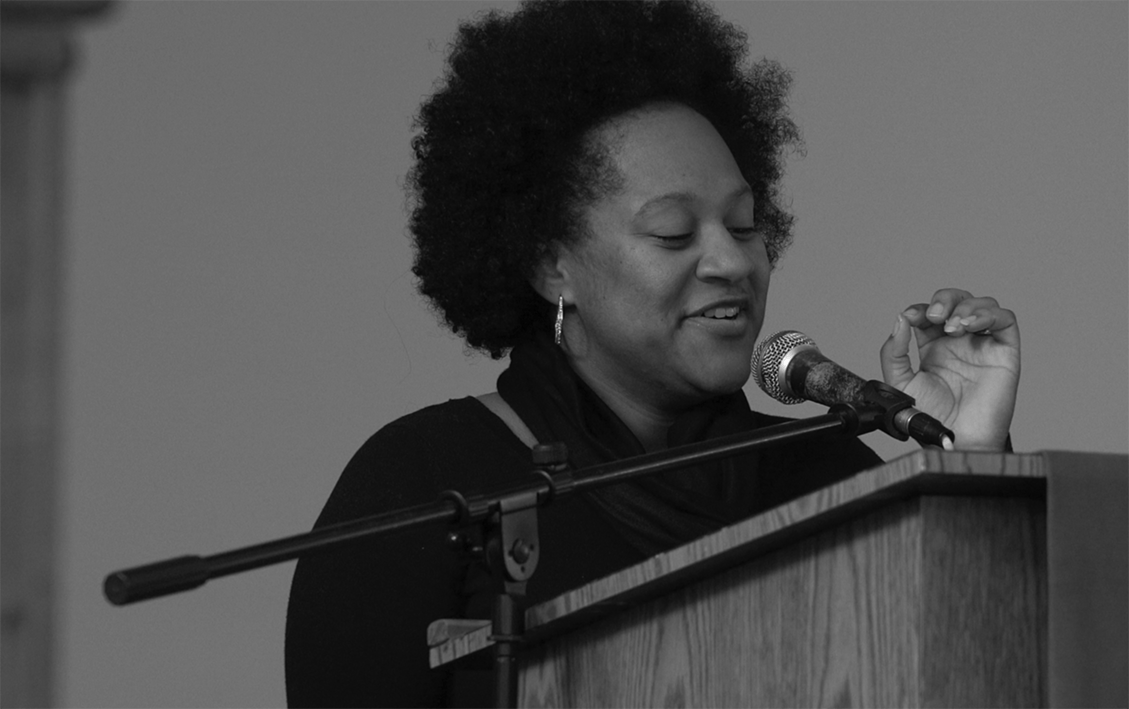 “I don’t know Bill Clinton, but I know it’s important to spend time on the inside,” Thandi Harris, a guest speaker living with HIV, said. “It’s an opportunity to bring a message here, to address the stigma of being incarcerated and having HIV and what can be done on the inside and outside.”

One goal addressed was getting people past the stigma so they can be tested and benefit from medical treatments that allow those with HIV to live a normal life.

“The stigma’s real,” Harris said. “People with diabetes don’t have to worry about what their friends think; they just take their medication.”

Blue sat in the first row of the audience, waiting until the end of the event to perform.

“This is a wonderful celebration of life, of people living with HIV, of medical advancements,” said Jessica Osorio, interim director of Contra Costa County Health Services’ HIV/AIDS/STD program, coordinator of the event.

He expressed concern that on one hand, most people believe we can eradicate the disease in our lifetime, while on the other, the fastest-growing new AIDS cases are 18-25 African American men.

Dr. Nicholas Moss of the Alameda County Public Health Department followed him to the lectern.

Both expressed that with the latest advancements, anyone who seeks treatment can live.

“You can survive, have a normal happy life, have kids, protect your loved ones and keep the disease undetectable,” Moss said.

Taking a medication called Pre-Exposure Prophylaxis or “PrEP” before sex can prevent getting the disease. You must take PrEP every day to work, and it does not prevent pregnancy or other STDs.

“One pill a day will keep you healthy and protect your loved ones from getting infected,” Moss said.

Many people don’t seek treatment because they fear getting tested. There are more than 1.1 million people in the U.S. living with HIV, and one in seven do not know they have it, according to a Contra Costa Health Services flyer.

San Quentin resident Andre Yancy believes the reason young Black men make up the fastest new group of AIDS cases is because they fear the stigma.

Yancy, now 55, was diagnosed with HIV in 1996. He tackled the stigma head on by speaking about it openly. He said that encouraged three others, who never spoke about their status before, to come forward.

He recalls how horrible the medications were back in 1996. He had to take six pills, three times daily, and they made him restless. Now he takes three pills once a day, and, although the toxic drugs could have side effects that affect the liver and kidneys in some people, all they do is make Yancy hungry. They also reduced his HIV status to undetected.

“I am still stereotyped because some people are not educated,” Yancy said.

Harris, of PWN and WORLD, delivered testimony about how people close to her reacted when she disclosed her positive HIV status.

“I told my mother and thought she would abandon me,” said Harris, during her first visit to San Quentin. “But my mother was totally accepting and reminds me to take my medication.

“It took a year to tell my father. He was devastated. First time I saw him cry. He really doesn’t want to hear about my status. He can’t accept that. You have to be brave to disclose. I trust my gut and choose wisely. I wouldn’t disclose if I didn’t feel comfortable. I feel comfortable. Being here helps me.”

Spoken word and musical performances closed out the event on a high note.

“Isolation makes us suffer … let’s stop the judging … it takes all of us to fight it, so let’s unite and fight it,” Jackson said, referring to HIV.

San Quentin resident Timothy Warren sang, “I Need You to Survive,” directly to Harris, after thanking her for the bravery it took to disclosure her status in public.

Special guest Blue, performing at the San Quentin World AIDS event for the third straight year, closed out the celebration.

The Bay Area Black Music Award Spoken Artist of the Year from 2014 to 2017 and author of Destination Unknown did a piece that combined motivational speaking with her art.

“When your energy begins to fade…remember how dismal life looked,” Blue said. “Remember you can always find something to anchor you … just don’t give up … perseverance can’t fail those who decided to prevail.

“You can request a test as often as you wish, and you don’t have to tell the doctor why you feel you may be at risk.”

“Don’t be afraid. Go get tested,” Yancy said. “This is something you want to know about. If you’re not taking the right treatment, you could lapse into full-blown AIDS and not exist anymore. Don’t worry about anybody laughing at you—if you have any fears come seek me on the yard, no matter what race, and I’ll encourage you, uplift you and come with you to get tested.”