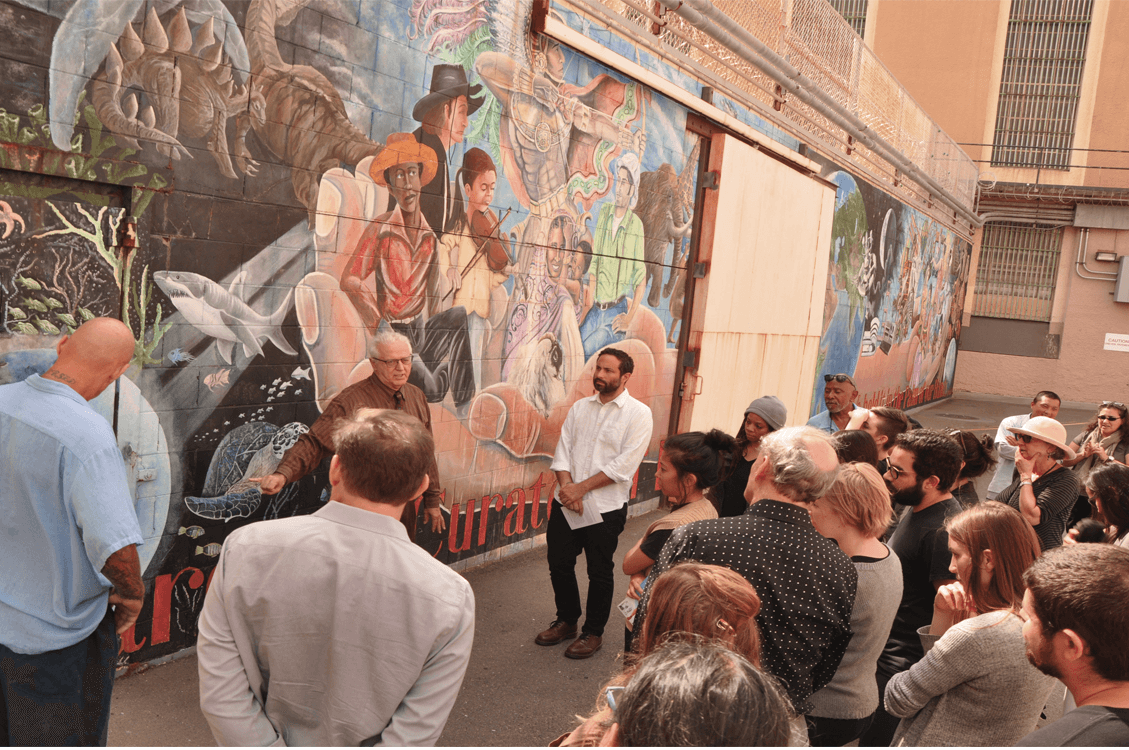 San Francisco Bay Area artists took a tour of San Quentin State Prison on Sept. 12 and discovered a treasure chest of sites hidden from the rest of the world.

A mural on the prison’s old dungeon first attracted Jordan Stein, who is a curator at Kadist, an international art gallery in San Francisco.

After Stein’s visit, members of the prison’s Arts in Corrections program invited him back, along with other Bay Area artists, to see San Quentin’s many murals.

“I think the visitors were impressed with all the murals, but they were most impressed with the artists themselves,” said William James Association art teacher Amy Ho. “They really appreciated the spirit and passion that the men put in their work.”

The visitors began by viewing the mural in the Catholic Chapel, then went to the dungeon, where a mural was once painted.

Next they saw the globe mural painted on a wall on the prison’s Upper Yard.

They walked a few yards to see a mural of the Golden Gate Bridge, accented with a seascape of fishing boats and fishery details.

The tour then walked into one of the housing units.

“I didn’t realize that two people were living in such a small space,” Ho said.

Lawrence Rinder added, “I have never visited a prison before. I felt uncomfortable looking into the inmates’ cell. It seemed like a violation of their privacy. I was also uncomfortable to be in the block itself. It just doesn’t feel right to be acting like a tourist in this kind of environment.”

Rinder is the director and chief curator of the UC Berkeley Art Museum and Pacific Film Archive.

The Alfredo Santos murals in South Block came next on the tour.

“The Santos murals were amazing! I think they qualify as among the great art treasures of the Bay Area,” Rinder said. “Their scale, complexity and variety of styles is mind-boggling. Very impressive work. It is so inspiring to see how art has enriched the prisoners’ lives and helped them find a means to persevere and maintain a sense of hope and possibility.”

The tour concluded in the small room where the inmates create most of their art.

There inmate Guss “Lumbumba” Edwards gave them an overview of the prison’s arts program.