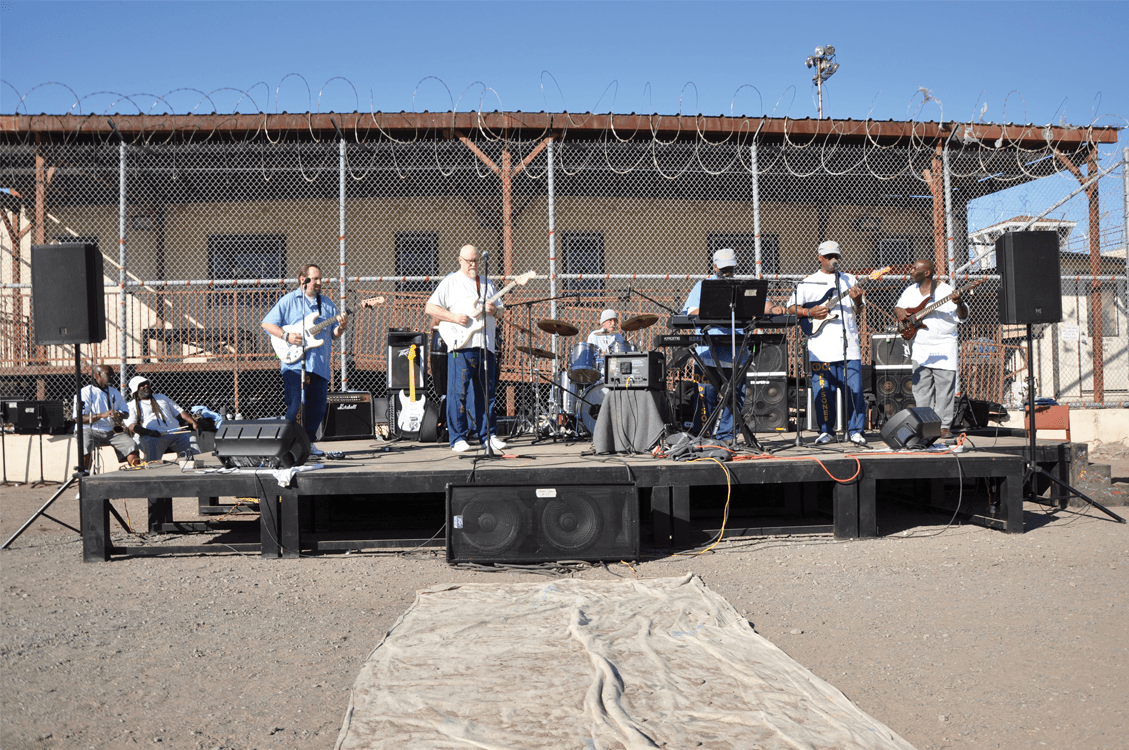 Continuum performing one of their hits

The sounds of San Quentin’s 2017 Grand Finale Music Yard Show were the perfect backdrop to hundreds of prisoners on the Lower Yard engaging in recreational activities and taking in the weekend sunshine.

The Oct. 28 event had most of the older prisoners relaxed in one of the eight rows of chairs placed stage front, reminiscing with the tones of the golden oldies, funk and jazz — other prisoners stood by finger popping and head bobbing. 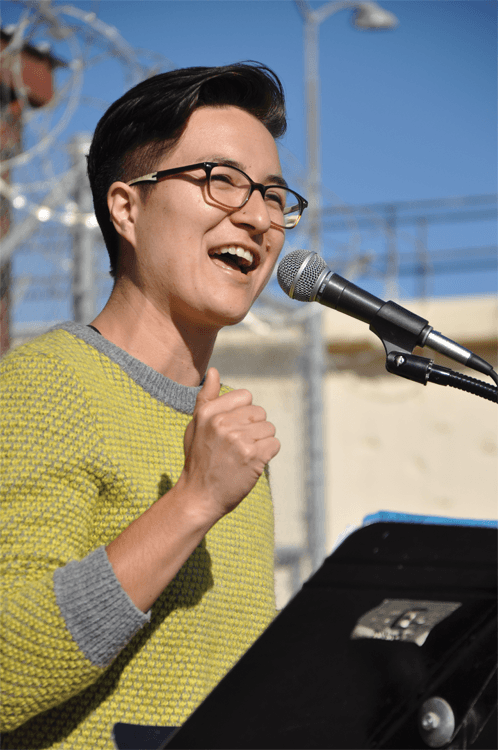 The affair was the year-ending musical showcase for all of San Quentin’s inmate house bands.

A “One Man Band” consisting of Allen “Squirrel” Ware opened the show with four original jazz pieces to the delight of the small crowd who made their way to the stage. Ware’s wiry fingers danced across the electric keyboard, putting all in mind of Herbie Hancock. 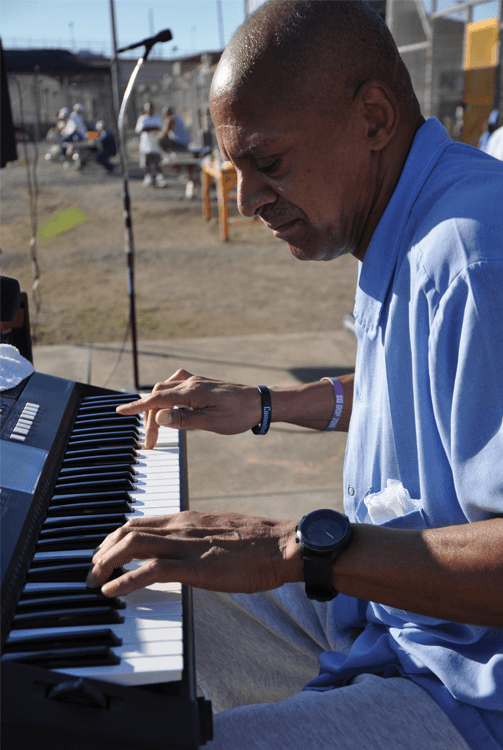 “Music soothes the soul,” said Ware. “It just changes your chemistry and attitude when you hear something good.”

Ware’s radio-worthy jazz tunes were the background music to Jehovah’s Witnesses standing at stage right and passing out pamphlets beside men in white T-shirts and gray shorts working out on the track’s black top.

Ware performed “People All Over the World (yes they do) They Love the Music,” “Turtle Walk” and “One Way Up.” It was his song “Fast-forward in Reverse,” an instrumental that topped off a sweet set that drew the loudest applause.

“I’ve been playing and writing music for 40 years,” said Ware. “It’s always nice to see how the crowd reacts to something you have created.”

The rock group “Continuum” was next to take the stage. Lead singer and guitarist Darryl Ferris’ vocal pitch sounded just like Darius Rucker when Rucker played with Hootie and the Blowfish. The group performed two cover songs by Dave Matthews, “So Much to Say,” and “What Would You Say.” 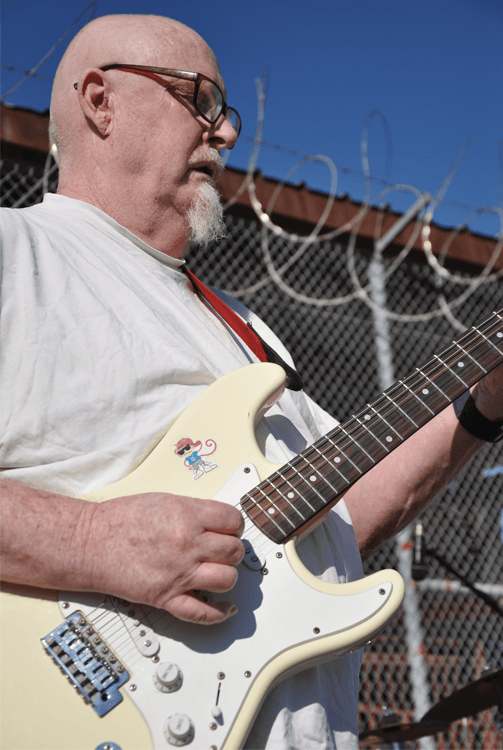 Ferris was backed-up by guitarists Chris Koppe and Allen Brown. Joe Thurseson worked the drums at the ripe old age of 70, Leonard “Funky Len” Walker handled the bass, Larry “Popeye” Faison was on the Latin percussions and W. “Rico” Rogers assisted on the keyboard. 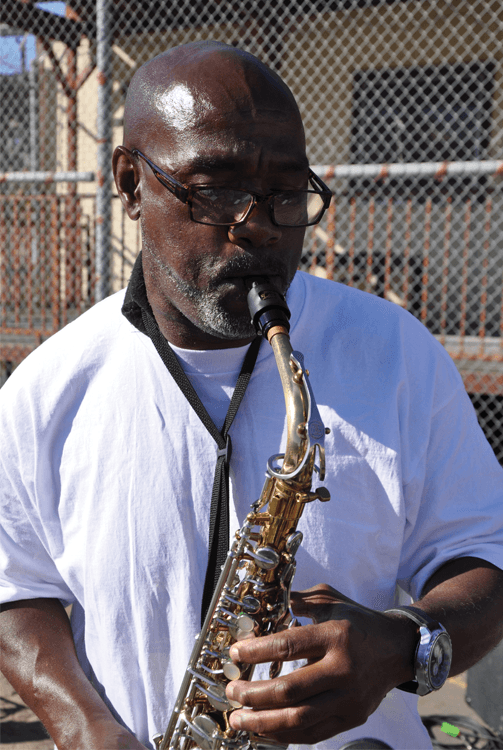 “Listening to all this music took me back to 1978,” said Faison. “Every level of life needs some form of recreation, and doing music live is a deserving presentation of that.”

Thurseson added, “Playing with these guys you have an opportunity to function with other cultures and learn the origin of different music. I played with Rick Stevens (Tower of Power singer) when he was in prison. We used to travel to different prisons to play; things was different back then.”

The highlight of their session came when volunteer Denali Gillaspie added her airy voice to “Don’t You Cry,” the band’s original song.

“Don’t you cry/ don’t you cry/ wipe your eyes/kisses and hugs/ love and love/so you won’t die/ look inside your head/ know that you’re not dead and gone, baby.”

The catchy hook and chorus, blended with the band’s reggae-inspired instrumentals, had most in the audience singing along.

Most of the musicians were a part of the San Quentin Music Program, which is sponsored by San Quentin staff member Raphaele Casale, who worked hard to pull off this event.

“Raphaele and Denali are amazing,” said Ferris. “They made this day and program happen. This day gives the men in blue a boost in morale and something more to do than just walk around.” 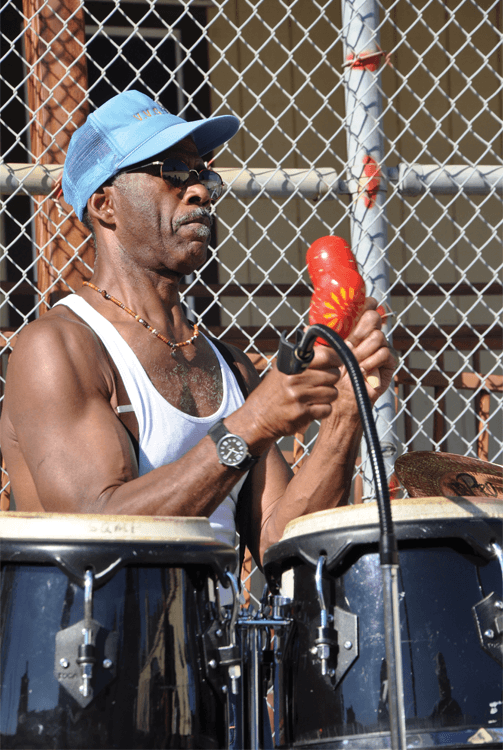 Gillaspie also lent her vocals to the next act “Just Came to Play,” the inmate jazz band. Gillaspie sang “Giving You the Best that I Got” by Anita Baker, which drew a standing ovation from the crowd.

The group performed “What’s Going On” by Marvin Gaye, and “For the Love of You,” a rendition by Norman Brown. Guitar man Charlie Spencer led the musical ensemble that consisted of  saxophonist Joe Demerson, vocalist Darryl “Champ” Hill Sr., drummer Charles Ross and keyboardist  Gillaspie.

“I’m a music teacher, but when I come here the guys are my music teacher,” said Gillaspie. “I can be shy, but the guys support me. They are a great group of musicians. Being here you learn about growth and forgiveness – shout out to Raphaele.”

The group closed their session with Stevie Wonder’s “Master Blaster (Hotter Than July)” that has become a crowd favorite over the years.

“We got so much trouble going on in the world today,” said Hill. “All we are hearing is how we are killing and destroying each other. We need to learn to solve our problems like civilized people.

“We need to learn how to heal and love each other, and that all starts with God,” concluded Hill.

Ross added, “If you can’t speak, music gives you a voice. It’s never too late to get into music. If I kept playing in the street I might not be here (prison).”

The band New Syndicate of Funk (NSF) took to the stage and brought the crowd a symphony of funk. They performed soul classics by the Dazz Band and the Isley Brothers. 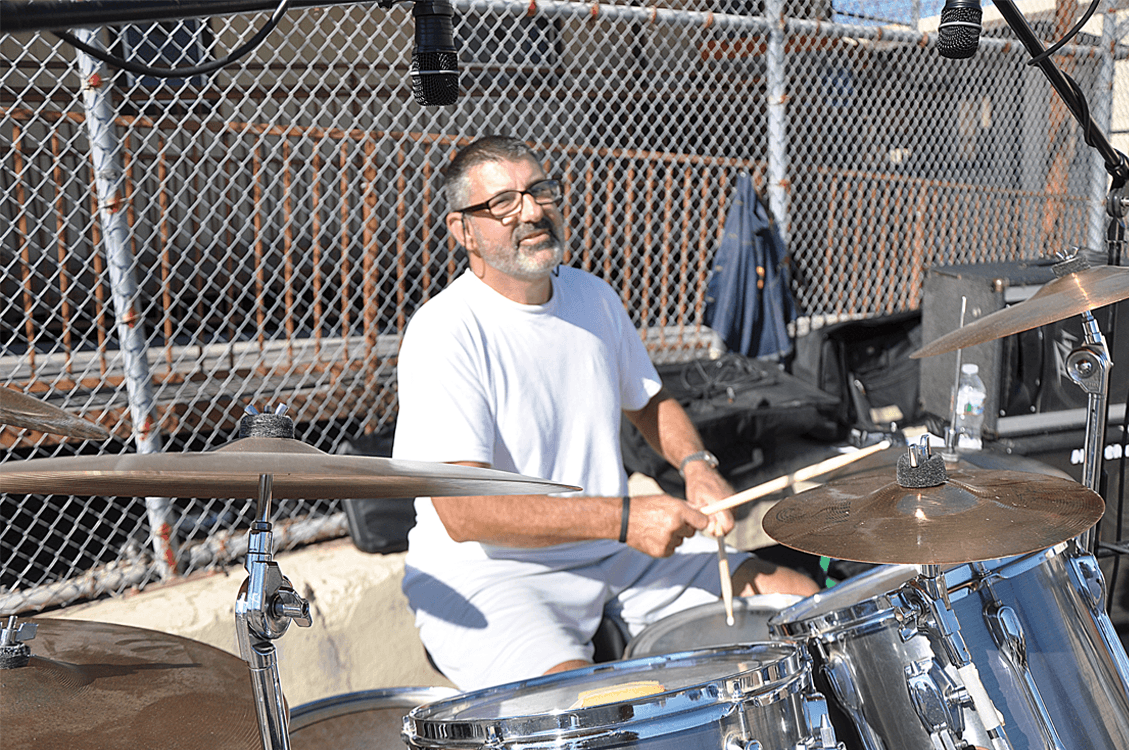 “Rico” Rogers voice soared on “Slow Dancing,” one of the band’s original songs. Rogers’ keyboard skills were a saucy mix with the guitar mastery of Lee “Jazz” Jaspar. Darryl Ferris played the bass while drummer Dwight Krizman and vocalist Michael Adams rounded out the funk gumbo.

“It’s so much fun playing these shows,” said Krizman. “This is the power of the funk. I get to play with some of the best musicians in San Quentin. I was playing some of these songs on the streets when they first came out.

“I understand how people in society might feel about us. But we are changing; we are human beings. We are not the worst thing we ever done,” concluded Krizman.

Jaspar took the lead vocal on “What You Won’t Do” by Bobby Caldwell, showing the crowd he had a voice along with his guitar playing. The band ended its set with “Joy and Pain” by Maze featuring Frankie Beverly.

The event did have its hiccups. The hip-hop band “Contagious” was not able to perform because of time restraints and technical difficulties with the sound system. Maybe next year, guys.