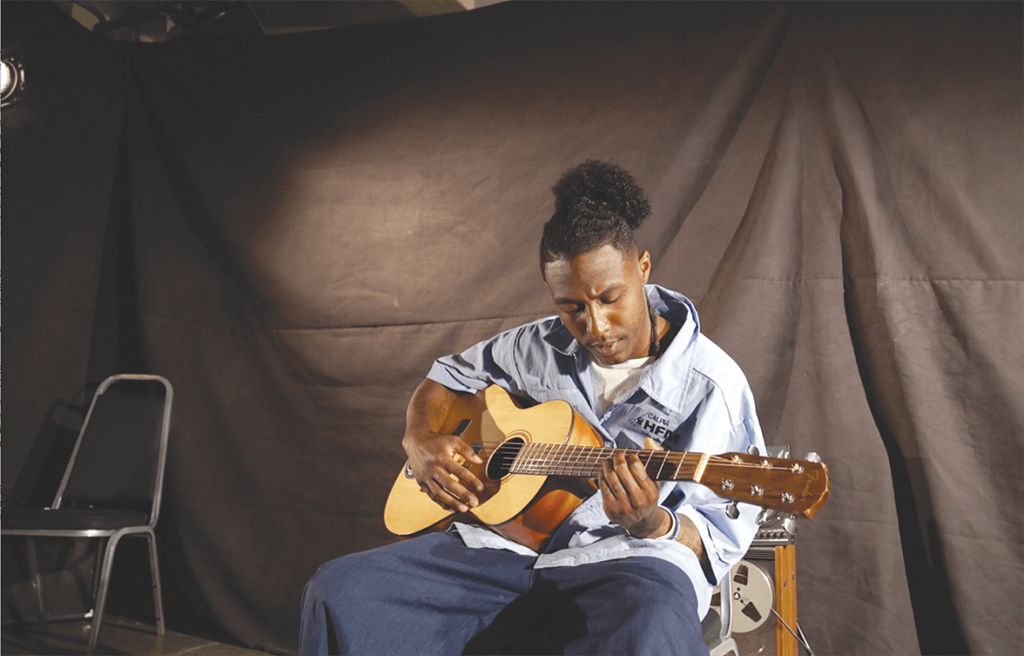 “Ear Hustle — that’s where I learned about the excellent talent and music people are making inside of prison,” said Limor Tomer, the general manager of live arts at the Met.

“I think it’s big to even be in a conversation where Ear Hustle is contributing to the Met,” Woods commented. Then he smiled and added, “It goes to show how Ear Hustle can open you up to things you never thought of. To hear them talk about 5,000 years of history makes me want to go see the show if I get out — right after watching ‘Ocean’s 8’.”

Darius Sommons performing from his book

Tomer heard an Ear Hustle episode called “Audio Extras.” A band called Quentin Blue preformed “Dirty Water” while Williams, along with Eric “Maserati E” Abercrombie and AJ Gonzales, did a rendition of “Jingle Bells Rock” with their own twist, including the sound of a guard’s keys. That episode and music from a few others sparked the idea that guys inside should do renditions of spirituals for the production From the Spirits.

From the Spirits involves ballet, opera, spiritual music and historic art. Accomplished New York City Ballet dancer Silas Farley performs classical ballet with his wife and muse Cassia and others to the sound of opera on the museum floor.

Farley is a tall Black man from North Carolina who fell in love with ballet when he was six years old. At 14, he earned a scholarship to the School of American Ballet in New York City. Straight out of high school, he became a professional ballet dancer, where he met his wife, an Austin, Texas, native. Now, at 24, he’s the youngest and only Black faculty member at the School of American Ballet.

“If his wife is a ballerina, does that make Silas a ballerino?” joked Woods.

Cassia, 26, came out of retirement to dance with her husband and other dancers on marble and stone floors in three sections of the museum — Ancient Middle Eastern Art, the Asia Wing and the American Sculptures Court.

In a show slotted for March 2019, opera soprano Kelly Griffin and tenor Robert May are scheduled to sing spirituals like “He’s Gotthe Whole World in his Hands.”

“Both have unique gifts of making unexpected connections,” Cassia said about her husband and Tomer.

Tomer first worked as a producer for the Brooklyn Academy of Music. She also worked for New York public radio station WNYC as the executive director of music. She started the radio show “Q2,” now called “New Sounds.”

She challenged Silas to incorporate music from guys at San Quentin into the piece. He accepted the task and held off choosing the last five songs until hearing the men at San Quentin.

“We thought spiritual songs would resonate with making new forms of art and the conditions here. I’m determined to know more about these artists and bring their talent to more people like the podcast,” Tomer said. “I contacted Nigel through her address, and she got back to me.”

Poor, who set out with Ear Hustle to show that incarcerated people can work as colleagues with people in the community, responded, “Why do renditions? We have all these incredible musicians who can write new music for the piece.”

On June 11, Tomer, the Farleys and Met director of education programs Sandra Jackson-Dumont sat in the SQ media center and listened to artists perform for a chance to help create what Silas calls a “dialogue across time, space and art.”

The auditions turned into a Fame-like atmosphere. Instead of competing for the five spots, the artist joined in one another’s performances.

Gary Harrell played an instrumental harmonica solo that turned into an impromptu collaboration. Singers Richie Morris and Mike Adams added vocals. Charlie Spencer played the guitar and Gino Sevacos used his guitar as a drum. The audience, made up of the rest of 12 acts, clapped.

Morris later performed as part of the band Quentin Blue along with Spencer. Additionally, Spencer did a solo song. Adams sang a duet with Joey Mason, and later performed a solo rendition of “How Great Is Our God” with the help of the other artists adding music.

Before singing his solo piece “Reflections,” Gonzales sang a rhythm and blues chorus to Lemer “Maverick” Harrison’s rap, “Oh Lord,” that had the small crowd chanting along.

“I feel really privileged and blessed to be heard by people who want to use our material,” Gonzales said. “I’d love to tell my loved one my song is being used.”

“Banks (Williams) invited me,” Sommons said. “It’s inspirational, exciting, humbling — I never thought this would be happening for me. It makes all the trials and tribulations worth it.”

Williams gave a standout performance with his original rap song “Designed by God,” a song about being happy and content with who and where you are because God made you for a purpose.

“It’s an amazing opportunity, unique in itself because it gives value to those often seen as unvalued and who often feel that way about themselves from being in prison so long,” Williams said. “I performed ‘Designed by God’ because I’m a firm believer that we are where we’re supposed to be. I wanted to show Silas that I was worthy of any kind of greatness people would tell you you don’t deserve because you’re in prison.”

The Met people, who sang along with many of the performances, left with notes on all the artists and tough choices to make.

“Isn’t so much as a podcast — it’s a minor miracle,” Poor said. “I’m so impressed and really proud people want to work with guys inside as equal collaborators. It made me wish we could do more things like that.”