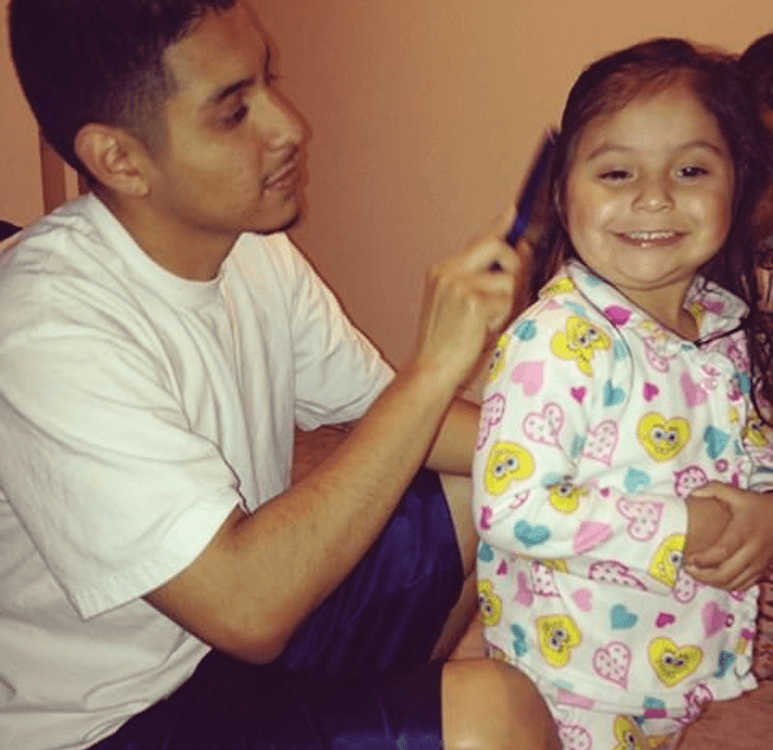 Daniel Gutierrez with his daughter Kaitlynn

Daniel Gutierrez, 21, says with regret that prison has been the norm in his family. “Everyone has been to jail except my mom.

“When I got to San Quentin, I ended up three cells down from where my grandfather was once housed. In the county jail I was in the same dorm my father was once in. I was even on the same (prison) yard with my uncle,” said Gutierrez.

A musician, Gutierrez said he shares a parallel life with his grandfather, Jose Moreno, who has been out of prison two decades. He even reflected on that relationship in a rap song, “The Same Prison as My Grandfather,” on a San Quentin Youth Offender mix-tape project. Gutierrez uses the song for therapeutic relief and guidance for his future.

One in 10 children who have an incarcerated parent will be incarcerated themselves before the age of 18, according to San Francisco Children of Incarcerated Parents Partnership (SFCIPP). Latino youth are 65 percent more likely to be jailed than their White peers, according to data from the Department of Justice collected in October 2015.

Jose Moreno, Gutierrez’s grandfather, was incarcerated in San Quentin in the late ’80s and early ’90s on drug trafficking charges. Moreno left his daughter Beatriz, 13, to deal with life without a father. Although only 13, Beatriz would become a teen mother when she bore Daniel.

“To tell the truth,” said Moreno, “when I was in San Quentin, I thought I was strong, but sometimes I would cry because my daughter had to see me in jail. Family is the most important thing you have in your life. So I know how he (Gutierrez) is feeling about his daughter.”

Now Gutierrez finds himself with his own daughter Kaitlynn growing up with her father in prison. Gutierrez became a father at the age of 14, continuing the cycle of children becoming parents.

“Having a daughter young, I felt I had to grow up quick,” said Gutierrez. “Growing up with the negative influences around me, doing crime was all that I knew.”

Gutierrez said he was convicted for armed robbery. He had been in and out of juvenile hall, boot camp and the county jail before the age of 18.

“Growing up with the negative influences around me, doing crime was all that I knew”

“I remember the time my grandfather visited me in juvenile hall. I could tell he was hurt,” said Gutierrez. “He tried to tell me no matter how much money you make, having a record makes things more difficult.”

Gutierrez admitted to still being hard-headed and thought he knew it all. He says now he is dealing with the circumstances.

“I feel bad for Daniel,” said Moreno. “I know sometimes you make mistakes, I understand everything. It’s hard to change someone else’s mind.”

“You got to be out of the bottle. That’s what helps me,” said Moreno. “When I get off of work I want to rest, but I still go to the AA programs. When you are in jail, it’s hard. I hope Daniel is getting into programs while he’s there. It’s a good place to change.”

Gutierrez reflected on the decisions he made that led him to San Quentin.

“When my parents separated my world kind of fell apart,” said Gutierrez. “My grandmother passed away, and a friend of mine got murdered. It was so much pain that I didn’t want to care anymore.”

This led to Gutierrez getting expelled from school, running from the police and carrying guns.

“There wasn’t really any teacher I could connect with. There were more distractions outside of school. I was just going there to make my mom happy,” said Gutierrez.

“I was really interested in music then. I think schools should be a little more hands-on and create more alternative programs that will keep kids’ attention,” continued Gutierrez.

“I know (Daniel’s mom) is suffering because her son is in prison. Beatriz is my oldest daughter. She’s really smart, and she tried to do the best she could with Daniel,” Moreno said.

The grandfather said he understands the pain that his grandson is feeling due to his own time spent in prison and wanting to see his own daughter.

“I always try to see my daughters whenever I get a chance, and sometimes she needs help, things get a little hard sometimes, and I try to be there the best I can,” Moreno continued.

Gutierrez is working on getting into parenting classes. He credits working with inmate producer David Jassy on the Youth Offender mix-tape for changing his outlook on life.

“Jassy transformed my way of thinking and my vocabulary,” said Gutierrez. “You couldn’t cuss on the tape, so he challenged you to come up with a better way to express yourself.

“(Jassy) gave me hope with the music. At first I didn’t care if I got more time or not. Now I’m determined to do better for my daughter and the music,” added Gutierrez.

Monica Moreno, Gutierrez’s aunt, said her dad has a lot of influence on her nephew.

“He (Jose Moreno) did his time. When he got out he switched his whole life around. My dad is a totally different person. I hope my nephew will do the same,” said Monica. “I encourage my nephew to continue rapping. That is his passion. He was doing that before he was in prison.”