The University of California, Berkeley awarded Professor William J. Drummond, an adviser to San Quentin News, the prestigious Leon A. Henkin Citation for Distinguished Service in February for his work as a journalist and academic.

In a speech, Edward Wasserman, the dean of the Graduate School of Journalism, cited Drummond’s work at the university including a first-of-its-kind course on race and media, his contribution to San Quentin News, and the relationship he established between the newspaper and the school. 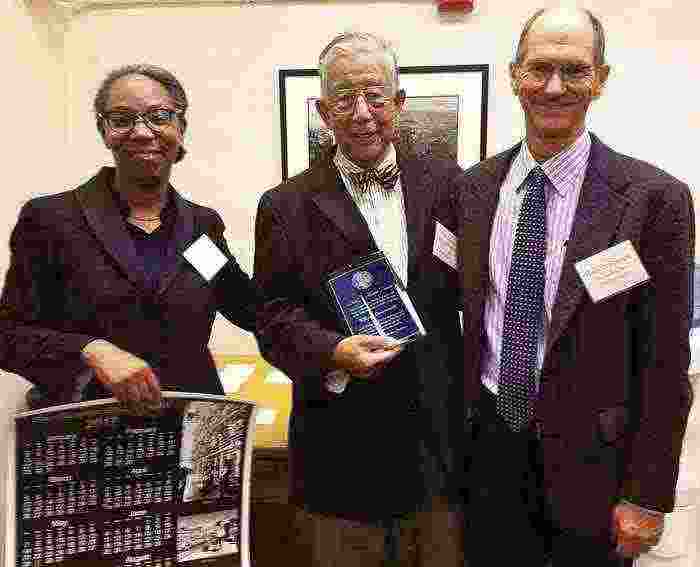 “It was kind of like a lifetime achievement award,” said Drummond, who has a 33-year history at the university. “When I first learned about this award, I thought, ‘This is something I’ve been doing all my life.’”

He said one of his colleagues nominated him for the award, but he was shocked about winning it. “When I was a working journalist I didn’t think about awards,” he said, adding that he taught because he wanted to inspire students to do well and it was his way of giving back.

Drummond has been volunteering at San Quentin since 2012, first developing writing and journalism classes for the Prison University Project and later for the newspaper when the managing editor asked him to help. Before then, there had been no interaction between the prison publication and the journalism school. “These are two of the oldest institutions in the state but there is little interaction between the two,” said Drummond.

San Quentin was established in 1852 and two years later, in 1854, the University of California, Berkeley.

According to the university’s website, the Academic Senate recognized Drummond “for his exceptional and extraordinary service towards the academic development of students from groups who are underrepresented.”

“Throughout his career as an academic and journalist, Professor Drummond has worked tirelessly to mentor and foster the participation of under-represented minorities in the field of journalism,” the Senate said in a statement, adding that his students include a Pulitzer Prize winner and The New York Times’ China correspondent.

As a 23-year-old cub reporter for the Los Angeles Times, Drummond’s big break came by chance during a phone call in June 1968 while he was covering the Democratic primary election between Robert F. Kennedy and Eugene McCarthy.

When Kennedy was shot and fatally wounded, Drummond had been talking on the phone with someone who was at the scene. The person dropped the receiver, but Drummond was able to figure out what happened by continuing to listen on the other end. He wrote about Kennedy’s assassination in 10 minutes right before the 12:30 a.m. deadline.

“That was the big breakthrough and turning point in my career,” said Drummond. “Prison became my main beat.”

By accident, Drummond found that men in California’s state prison system were educating themselves. One of these men was Eldridge Cleaver, the Black Panther Party’s minister of information and author of the book Soul on Ice.

Later, he worked for National Public Radio and won his first award in 1981 from the National Press Club for a story on Libya.

Drummond has won about 20 awards during his career, including most recently The John Gardner Legacy of Leadership Award in 2015, presented to him at the White House, and UC Berkeley’s Chancellor’s Award for Public Service in the 2014-2015 academic year.

Despite his many accomplishments, however, Drummond expressed his frustration with his profession in an interview with California Magazine in 2012. He said journalists were suffering from a “loss of faith” in the profession. “I found myself looking back on 40 years as a journalist, trying to identify a story I wrote, any story, that made anyone’s life materially better,” he said. “I wasn’t able to think of one.”

He said that his work with San Quentin News brought him back to the kind of journalism that he set out to do in the beginning of his career. He said prison journalists want to get better at what they do and as a result of that, working with them is “much more of a rush than anything I’ve ever done.”