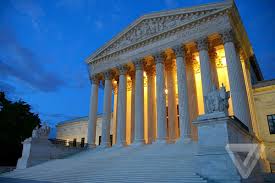 The U.S. Supreme Court in early March ruled 5 to 3 in the case of Jennings v. Rodriguez that the Immigration and Nationality Act does not permit regular bail hearings for undocumented immigrants detained by U.S. immigration officials, according to The Atlantic.

The five justices of the majority ruled that the Immigration and Nationality Act statute does not permit bail hearings for immigration prisoners and accordingly authorized officials to hold detainees for weeks, months and even years.

In 1994 the Immigration and Naturalization Service, on any given day, held about 5,500 immigrants in detention facilities. In 2017, Immigration and Customs Enforcement (ICE) projected a 2018 detention population of 51,379, which would make its Enforcement and Removal Operations (ERO) division almost the seventh-largest prison system in the country.

The ERO has quietly expanded into a loosely supervised and secretive system that has held detainees for multiple years without due process, according to the article.

Critics contend that the local and private detention facilities, which are governed by agreement with ICE officials, are rife with poor physical conditions, inadequate medical care and physical and sexual abuse of the inmates, according to The Atlantic.

This exploding population of prisoners is fueled by an influx of arrests. Most people have not been charged with or are awaiting trial for any crime. Many have done nothing wrong, except request admission to the United States under our law when Customs and Border Protection Officers believe they are not entitled to do so.

Throughout much of the nation’s history, immigration law and policy were focused on helping new immigrant populations assimilate to American life and gain citizenship instead of arresting, prosecuting or expelling new arrivals, said Hiroshi Motomura, a professor at the University of California at Los Angeles.

This old policy has changed into an internal-espionage and police-control apparatus aimed at controlling “illegal immigrants.”

In his dissenting opinion, Justice Stephen Breyer wrote, “I would find it alarming to believe that Congress wrote these statutory words in order to put thousands of individuals at risk of lengthy confinement all within the United States but all without hope of bail. I would read the statutory words as consistent with, indeed as requiring protection of, the basic right to seek bail.”

The Supreme Court refused to consider the constitutional issues at play in the case, sending it back to the Ninth Circuit, where it originated.