Two dedicated advocates used the art of storytelling and a stroke of a paint brush to bring awareness about the lives of the 200 plus women serving life without the possibility of parole (LWOP) sentences throughout California’s prison system.

Adrienne Skye Roberts and artist Billie Belo, tapped into the racism, sexism and classism that affected these women’s lives in their “A Living Chance” project. Some of the women dealt with rape, domestic violence and suffering under human trafficking before incarceration.

“Storytelling and visual arts for our communities are a creative form of resistance,” Roberts said. “The majority of the LWOPs I work with are survivors of abuse or were in a relationship with their abuser at the time of their abuser’s crime and evidence of this abuse is rarely presented in trial.”

The project consisted of interviews and recorded stories of more than 50 women from the Central California Women’s Facility (CCWF) and California Institution for Women (CIW). More than 70 women also sent in their stories from these prisons.

“Every single story is incredibly moving,” Belo said. “They reveal so much about our society and demonstrate the resiliency of the human spirit.

“The major aim of the art is to honor and show gratitude for the tremendous emotional labor the project asked of the women. I know it’s not easy to recount these stories and in many cases relive very traumatic events,” Belo continued.

Roberts and Belo are old friends who met in college and used to live together in the San Francisco and Oakland areas. They both are volunteers for the California Coalition for Women Prisoners (CCWP).

“Billie (Belo) is an amazing, self-taught artist and has always been supportive of my work with CCWP,” said Roberts, who has been working for the organization for six years. “I was updating her about the storytelling project and she suggested she participate by painting people portraits.”

Belo has been involved with the CCWP for four years and was inspired by the Pelican Bay Security Housing Unit hunger strike a few years ago.

“I remember one of the requests by the strikers was for a photograph to be taken of them every year and sent to their families. 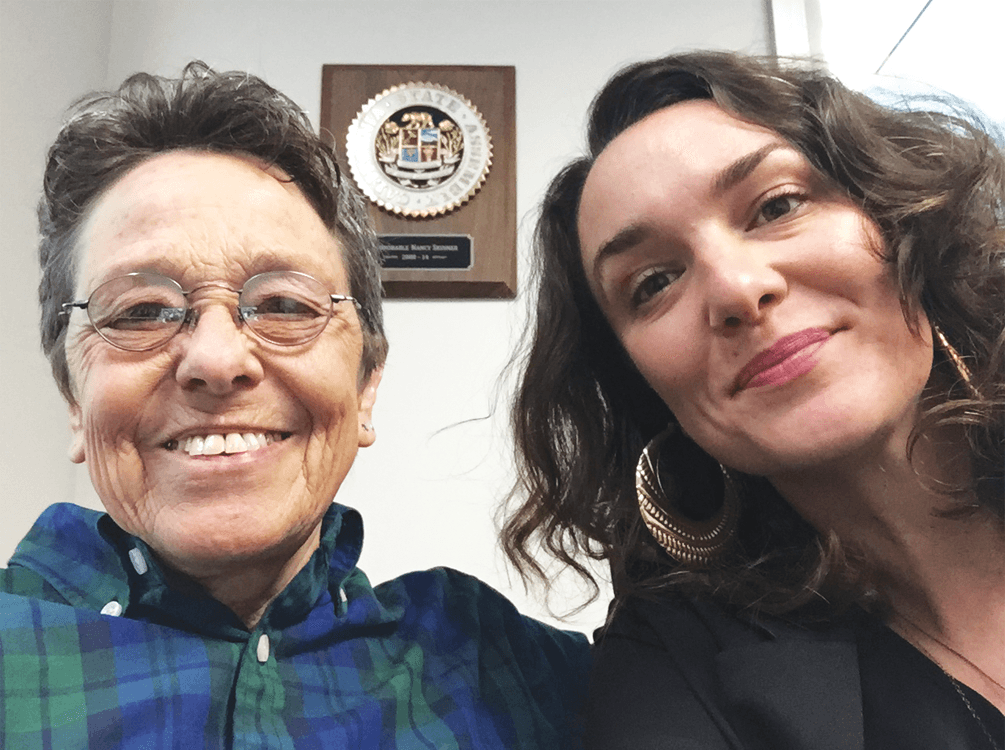 “This request reminded me of the United Nations (UN) declaration of universal human rights, which states that everyone has a right to a name. This right is to prevent people from being dehumanized as a number,” said Belo.

While humanizing and giving a voice to these women serving LWOP, the advocates gained insight into the criminal justice system.

“I knew nothing about LWOP before I started volunteering for CCWP,” Roberts said. “I have learned so much from our members inside, including the felony-murder rule, special circumstances, and the particular circumstances impacting women sentenced to LWOP.”

With that knowledge, Roberts and the CCWP decided to make LWOP a priority in its organizing and educational platforms. The group launched a campaign using postcards and petitions to encourage Governor Jerry Brown to commute LWOP sentences to parole-eligible sentences. The postcards feature the portraits of the women serving LWOP and their stories.

“We are using the stories and testimonies to demonstrate to Gov. Brown and the public that LWOP is inhumane and cruel punishment and disproportionately impacts people of color, the majority of whom are survivors of violence,” said Roberts.

The organization members are meeting with state-elected officials, holding storytelling events, workshops, and participating in art exhibitions to bring awareness.

“I believe storytelling humanizes people that society teaches us to hate or fear,” Roberts said. “I want these stories to be a starting point to engage with the issues of incarceration, extreme sentences and the experiences of survivors and marginalized communities in prison.”

Belo added, “I hope the art reflects the stories. Art should have a purpose and push our society forward by asking us where we are and why. It should inspire us to imagine better and find workable alternatives when the current systems fail us.”

Many of the women serving LWOP describe themselves as the “lost population” but actually have been considered the backbone of their prisons by some of their peers. These women have become facilitators of rehabilitative groups on Restorative Justice, domestic violence and healthy relationships, noted Roberts.

“I will be forever amazed at the ways that people in prison heal themselves and their peers,” Roberts said. “Regardless of the circumstances in which they are forced to live.”

Both women advocates continue to be involved in the community to address criminal justice and social issues. Roberts does Restorative Justice in the Pittsburgh Unified School District to help end the school-to-prison pipeline.

Belo is working on publishing a book of the images, a graphic novel project with some of the stories and illustrations of the LWOP women from start to finish. She also is producing paintings to sell for healthcare services for a transgender friend.

“I am proud of everyone who worked on this project inside and out,” Belo said.

Roberts concluded, “I know people will be moved by hearing these women’s stories. My hope is they participate in the movement for prisoner rights and expand the avenues toward freedom.”